Industry is a prime setting for observational causal inference, but many companies are blind to causal measurement beyond A/B tests. This formula-free primer illustrates analysis design patterns for measuring causal effects from observational data.

By Emily Riederer, Senior Analytics Manager at Capital One. 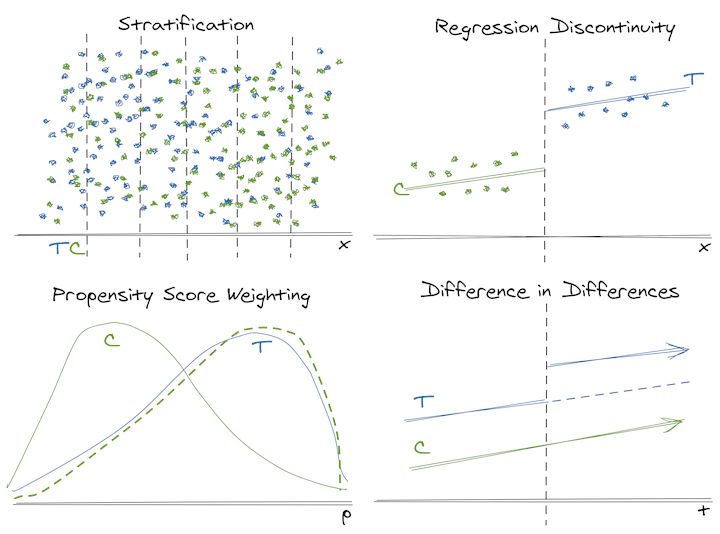 Mnemonic illustrations of CI methods, made with Excalidraw.

Software engineers study design patterns1 to help them recognize archetypes, consider approaches with a common language, and reuse tried-and-true architectures. Similarly, statistics has many prototypical analyses, but too often, these frameworks are siloed within specific disciplines and clouded by domain-specific language. This makes methods harder to discover and hides their general applicability. Consequently, it can be hard for practitioners outside of these fields to recognize when the problem they are facing fits one of these paradigms.

Observational causal inference is one such field. The need to understand true causal (versus correlative) effects and to derive meaning and strategy from “found” historical data (as opposed to experimentally “produced” data) is nearly universal, but methods are scattered across epidemiology, economics, political science, and more.

This post aims to break down some of those barriers by briefly summarizing common cross-disciplinary design patterns for measuring causal effects from observational data with an emphasis on potential use in industry. For each method, I provide an illustration, an overview of the method, a summary of the required data structure and key assumptions, and a hypothetical consumer retail example.

Causal inference is complex, and doing it well requires both statistical and domain expertise. Instead of providing all of the details that are already eloquently described in countless free resources, this post humbly aims to advertise these methods so analysts can add them into their mental index and investigate them further when they encounter a relevant question.

Why CI in Industry?

Classic examples of causal questions include “Does smoking cause cancer?” and “Does education cause extra income?” Naively, we might compare outcomes (cancer or income) for those receiving the treatment (smoking and education) and those not. However, the fact that someone chose to smoke or pursue higher education creates selection bias; these behaviors likely correlate to other factors (risk-taking, financial support, etc.), which can also impact the outcome.

In industry, businesses want to know what causal effect their strategies (e.g. promotional offers) have on customer behavior. Here, of course, businesses have a major advantage over the examples above because the assignment mechanism into the treatment group (e.g., whom to send a discount code) is known and under their control. They often also have richer “pre-treatment” behavior for each individual (customer), which can help both assess and correct for bias.

However, these advantages don’t make causal inference unnecessary; if anything, they simply make it more possible and more relevant. Good businesses don’t act at random. For example, we market to customers who are likely to be interested in our company and who, therefore, might have been interested even without marketing. When it comes to measuring effectiveness, good business is bad science. Because our treatments are not given at random, comparing the outcomes of treated and untreated groups is confounded and biased towards making us think we are more effective than we actually may be.

One antidote to this is true experimentation in which treatment is randomly assigned within the homogenous target population. Experimentation, particularly A/B tests, have become a mainstay of industry data science, so why does observational causal inference matter?

Beyond these specific challenges, perhaps the best reason is that there are so many questions that you can answer. As we’ll see, almost all of these methods rely on exploiting some arbitrary amount of randomness in whether or not a specific individual or group received a certain treatment. Industry (and life in general) is full of non-random but well-defined (and somewhat arbitrary) policies, which make it fertile ground for observational causal inference. Analysts can embark on data search-and-rescue missions and find new uses in reams of historical data that might be otherwise discounted as hopelessly biased or outdated.

To illustrate potential applications, this post will provide a brief overview of Stratification, Propensity Score Weighting, Regression Discontinuity, and Difference in Differences with motivating examples from consumer retail. Each of these methods deals with situations where different groups receive different treatments, but the assignment of groups was not completely random.

To create this counterfactual without true randomization, these methods attempt to exploit different sources of partial random variation4 while avoiding different types of confounding in order to derive a valid inference.

The types of partial randomization found in your historical data and the types of biases you are concerned about dictate which methods are applicable. In short: 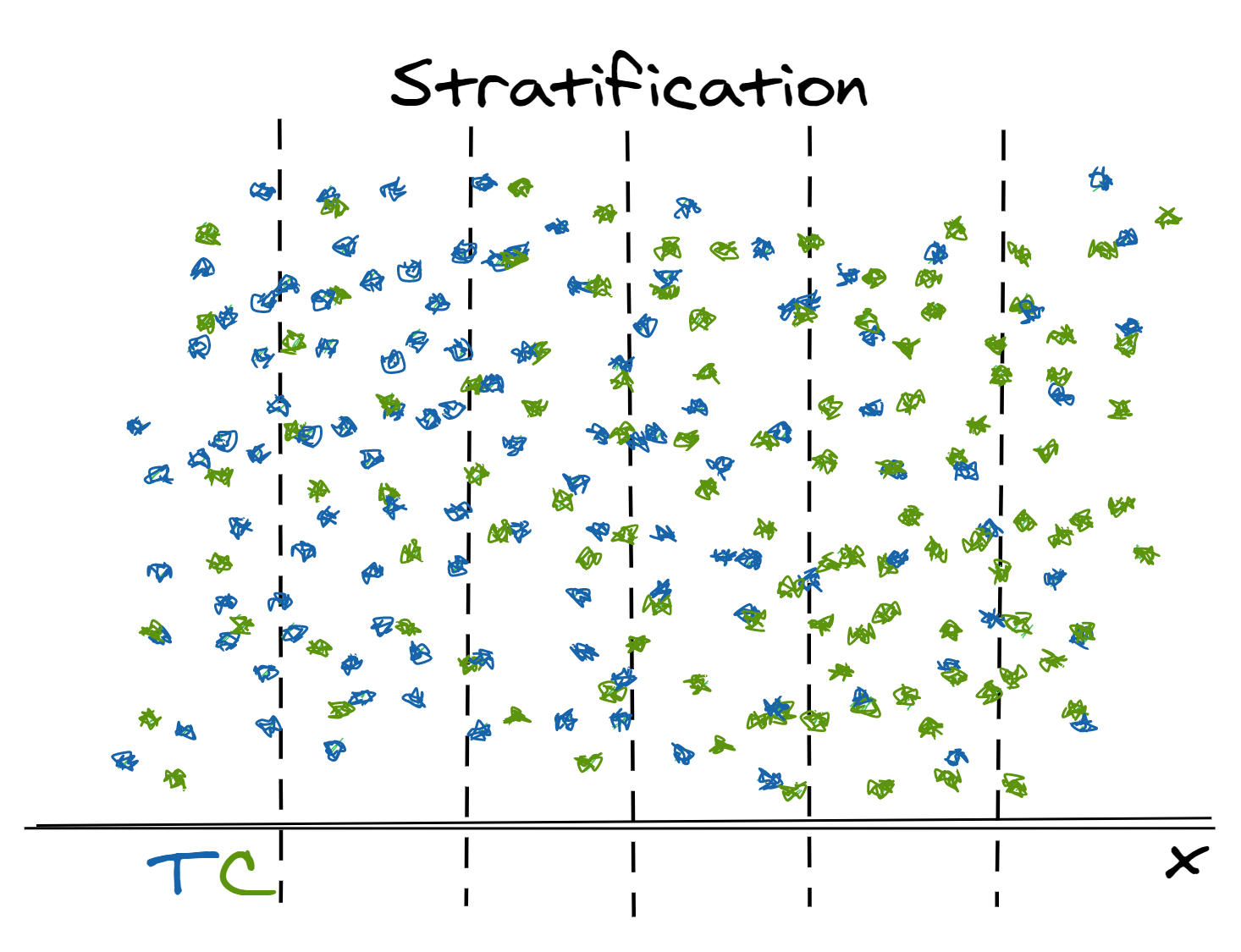 Stratification helps us correct for imbalanced weighting of treated and control populations that arise due to a non-random assignment mechanism.

TLDR: When you have “similar”5 treated and untreated individuals with different distributions on a small number of relevant dimensions, use stratification helps to rebalance these groups to make their average effects more comparable 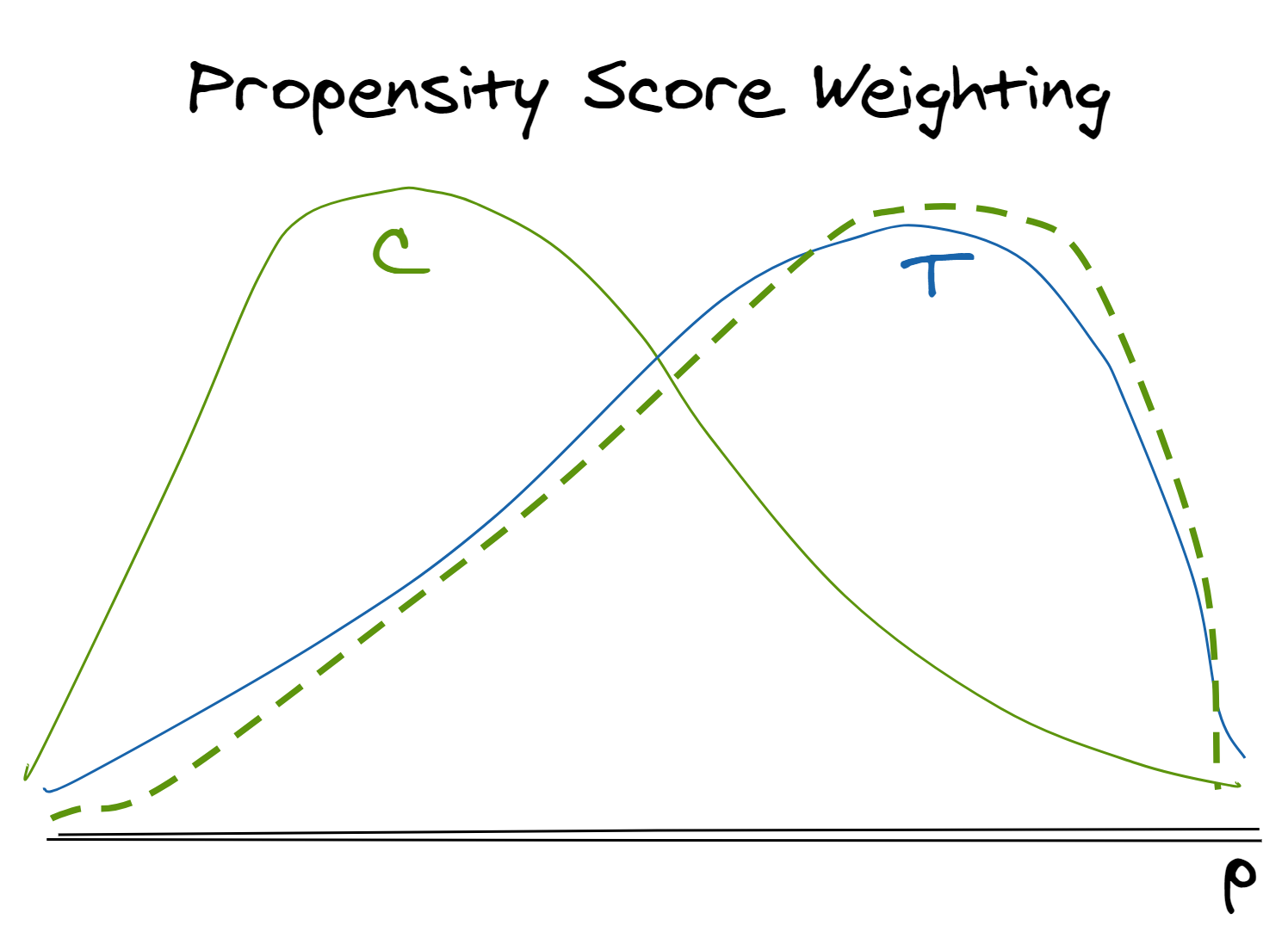 Similar to stratification, propensity score (think “likelihood of treatment”) weighting helps us correct for systemic differences between treatment and control populations that stem from non-random assignment mechanisms. However, this approach allows us to control for many observable characteristics that influence assignment by reducing all relevant information into a single score on which we balance.7

TLDR: When you have “similar”8 treated and untreated individuals with different distributions on a larger number of relevant dimensions, propensity score weighting helps to rebalance these groups to make their average effects more comparable 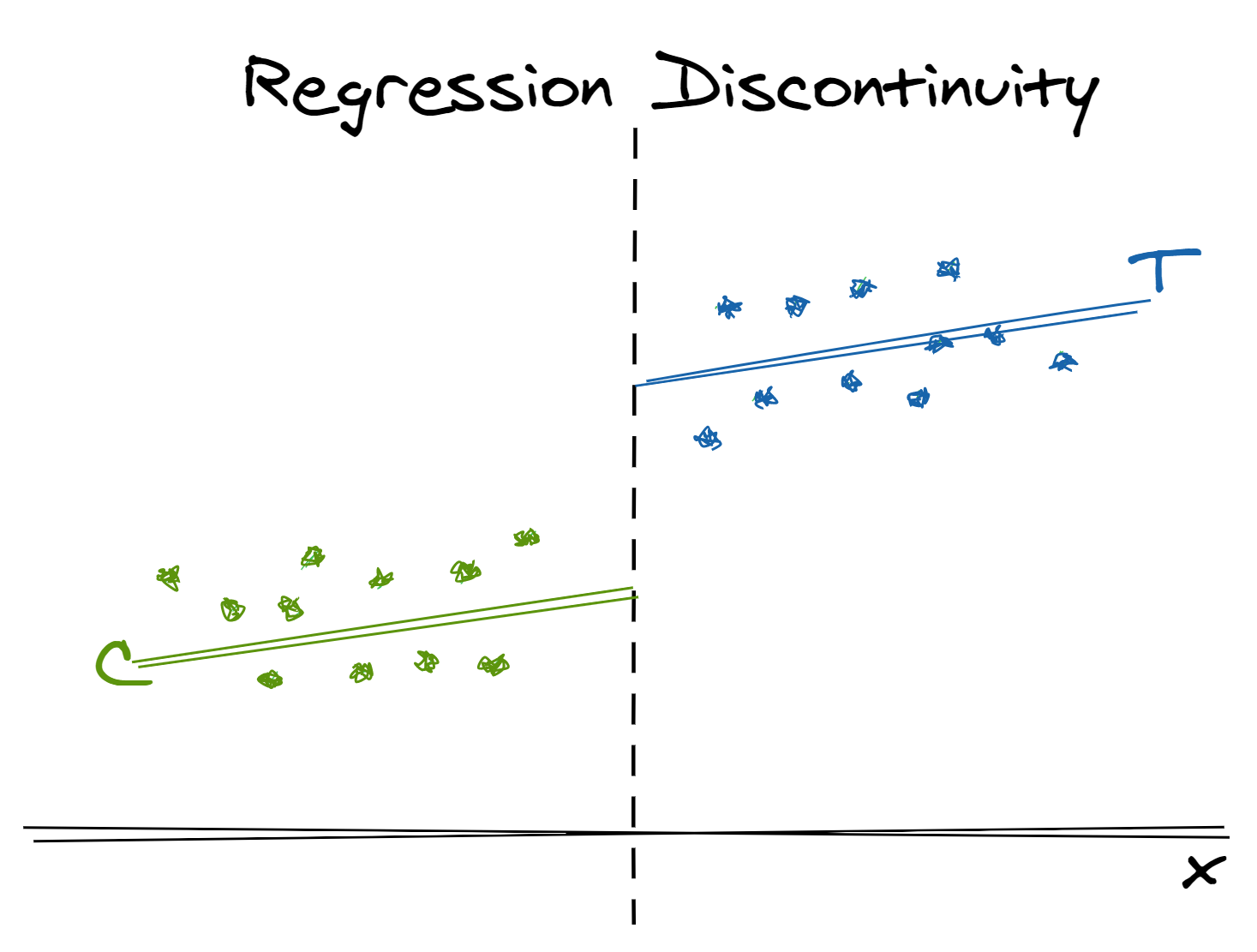 Often, in real life and particularly in industry, we violate the “positive probability of treatment throughout the covariate space” assumption required by stratification and propensity score weighting. Business and public policy often use strategies that have sharp cut-offs (e.g., customer segmentation based on age and spend) with individuals on either side of this cut-off receiving different treatments. In such cases, we have no relevant observations to re-weight. However, we can apply a regression discontinuity design to understand the local effect of a treatment at the point of discontinuity.

TLDR: When you have disjoint treated and untreated individuals separated by a sharp cut-off, use the arbitrary variation in treatment assignment for those right above or below the cut-off to measure a local causal effect. 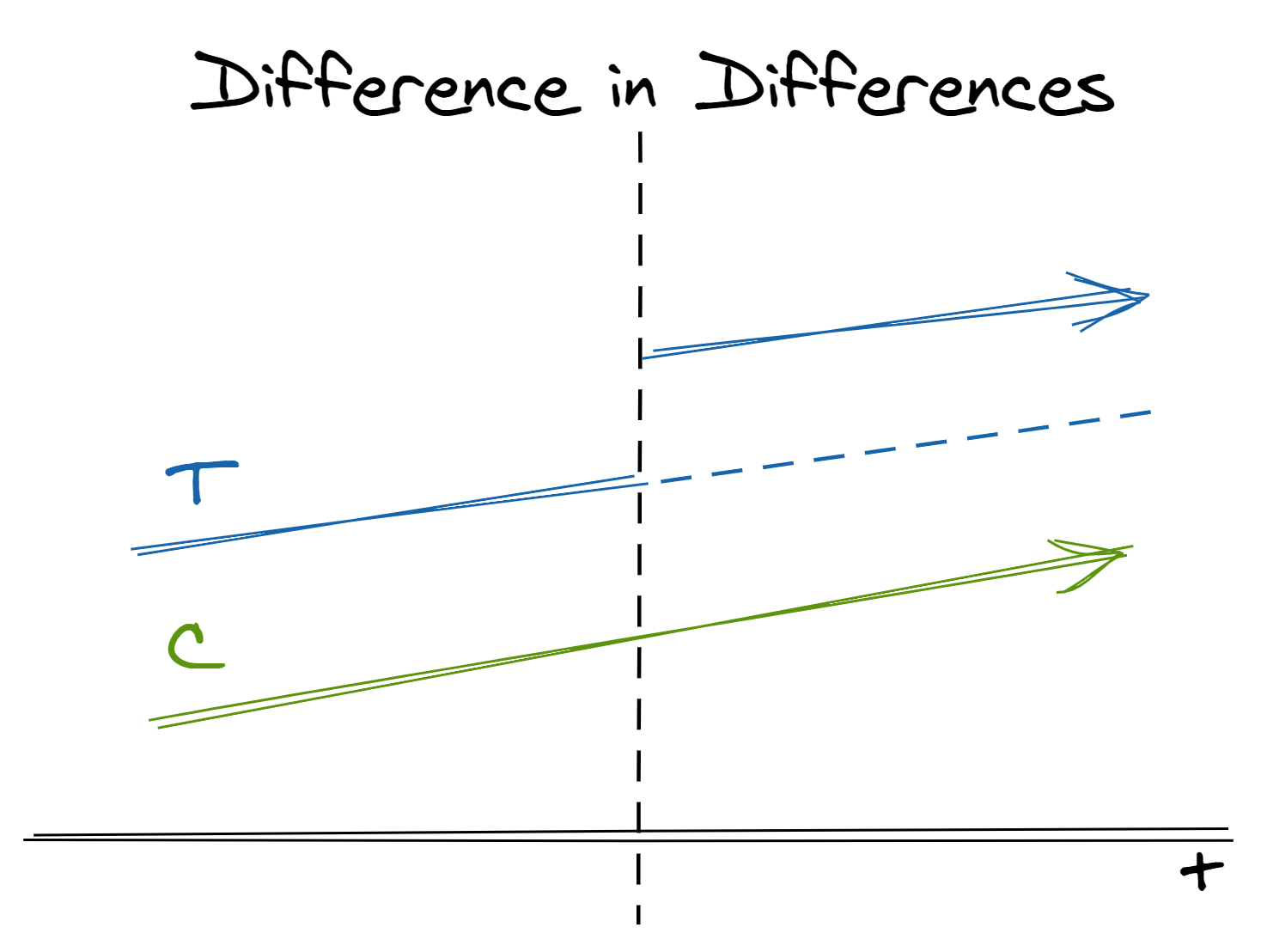 So far, we’ve looked at methods that try to make groups as similar before treatment as possible. One way we can evaluate these methods is to see if, as we would expect, their values of the variable of interest before treatment are similar (e.g., spend in the 6 months leading up to a promotion.) However, the data we have available makes that intractably restrictive. Instead of looking for similarity in the absolute level, difference-in-differences helps us more flexibly settle for similarity in trajectories over time. That is, instead of comparing treatment and control groups within the same population at the same time, we can compare the relative change across treatment and control populations across time.

TLDR: When you have group-level treatments or data available, use random variation across populations to compare their overall trends over time. 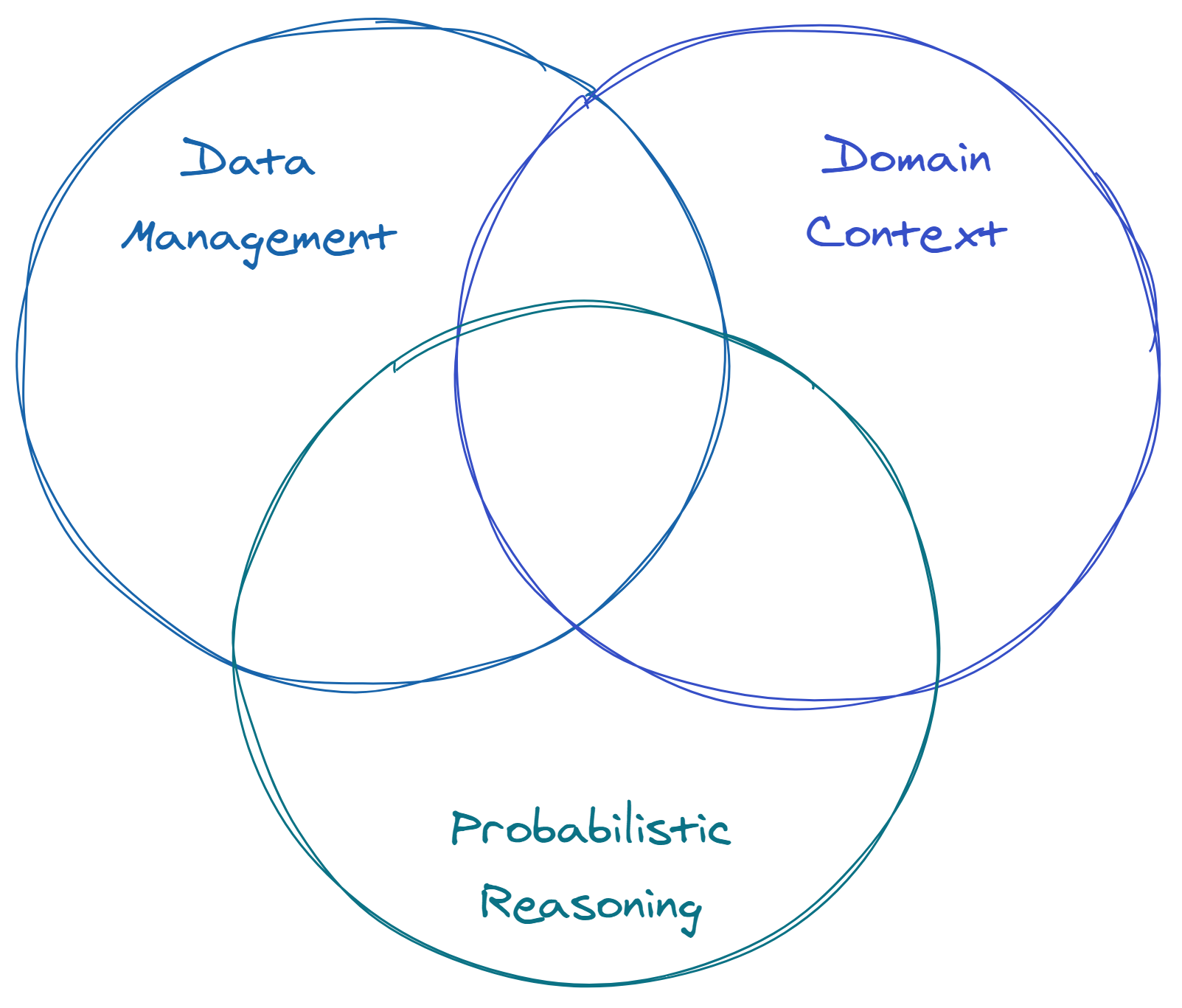 If the examples above have at all intrigued you, there are a few more things to keep in mind. Explaining these design patterns is easy; implementing them when, and only when relevant is hard. Causal inference requires investment in data management, domain knowledge, and probabilistic reasoning.

Data management is needed to ensure that data on past treatments are preserved, discoverable, and sufficiently detailed. All of these methods require rich data with measures of baseline characteristics of each individual being studied and a solid understanding of the treatment they received. This may seem obvious, but it’s easy to neglect to preserve data of sufficient granularity. For example, we might have a database that maps every customer’s account to a system-generated campaign_id denoting some marketing campaign that they participated in; however, unless information about that specific campaign (the specific treatment, the targeting, the timing, etc.) is readily available, this is not terribly useful. Additionally, as in our stratification example, some of the best opportunities for causal inference come from execution errors (or, more gently, “natural experiments”). We may be inclined to forget about these errors and move on, but information on events that did not go as intended can be powerful fodder for future analysis.

Domain knowledge is essential to validate the assumptions. Unlike other forms of inference (e.g., a basic linear regression), many of the assumptions we discussed for the methods above cannot be computational or visually assessed (e.g., not like the quintessential residual or QQ plots). Instead, assumptions rely largely on and careful attention to detail combined with intuition and background knowledge from one’s domain. This means causal inference should necessarily be a human-in-the-loop activity.

Finally, a solid grasp of probabilistic reasoning and understanding of these methods is also critical. As many of the resources I link below discuss at length, it’s easy to do causal inference wrong. For example, attempting to control for the wrong variables can sometimes induce correlations and cause biases instead of eliminating them.13

The point of this post is not to teach any one method of causal inference but to help raise awareness for basic causal questions, data requirements, and analysis designs which one might be able to use in the wild. There are a plethora of fantastic resources available to learn more about the specific implementation of these or other methods. Please check out my companion resource roundup post for links to many free books, courses, talks, tutorials, and more.

Bio: Emily Riederer is a Senior Analytics Manager at Capital One where she leads a team focused on building innersource analysis tools, data marts, and communities of practices to improve business analysis.