Advancing deep learning techniques continue to demonstrate incredible potential to deliver exciting new AI-enhanced software and systems. But, training the most powerful models is expensive--financially, computationally, and environmentally. Increasing the efficiency of such models will have profound impacts in many ways, so developing future models with this intension in mind will only help to further expand the reach, applicability, and value of what deep learning has to offer.

Machine Learning is being used in countless applications today. It is a natural fit in domains where there is no single algorithm that works perfectly, and there is a large amount of unseen data that the algorithm needs to do a good job predicting the right output. Unlike traditional algorithm problems where we expect exact optimal answers, machine learning applications can tolerate approximate answers. Deep Learning with neural networks has been the dominant methodology of training new machine learning models for the past decade. Its rise to prominence is often attributed to the ImageNet [1] competition in 2012. That year, a University of Toronto team submitted a deep convolutional network (AlexNet [2], named after the lead developer Alex Krizhevsky), performing 41% better than the next best submission.

What was different this time around was a combination of multiple things:

As a result of this trailblazing work, there was a race to create deeper networks with an ever-larger number of parameters. Several model architectures such as VGGNet, Inception, ResNet etc., successively beat previous records at ImageNet competitions in the subsequent years. These models have also been deployed in the real world. 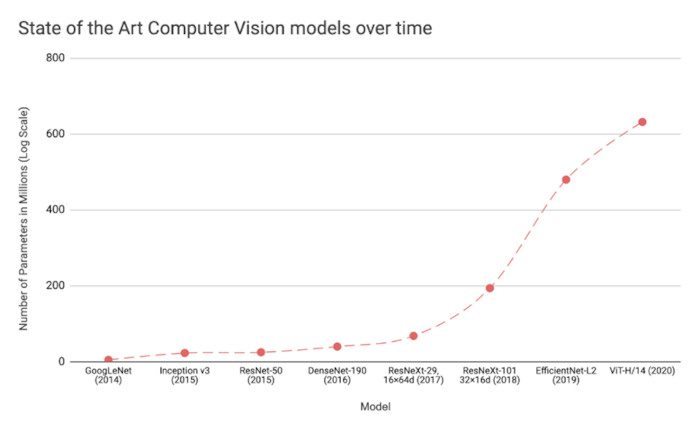 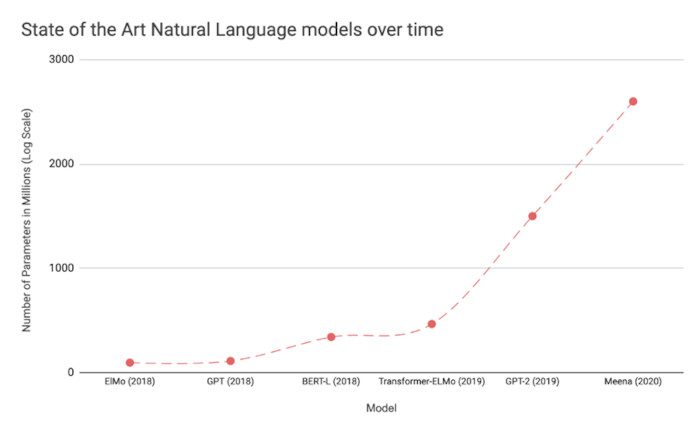 Figure 1: Growth of the number of parameters in popular computer vision and natural language deep learning models over time [4].

We have seen a similar effect in the world of natural language understanding (NLU), where the Transformer architecture significantly beat previous benchmarks on the GLUE tasks. Subsequently, BERT and GPT models have both demonstrated improvements on NLP-related tasks. BERT spawned several related model architectures optimizing its various aspects. GPT-3 has captured the attention by generating realistic text accompanying given prompts. Both have been deployed in production. BERT is used in Google Search to improve the relevance of results, and GPT-3 is available as an API for interested users to consume.

As it can be inferred, deep learning research has been focused on improving on state of the art, and as a result, we have seen progressive improvements on benchmarks like image classification, text classification, etc. Each new breakthrough in neural networks has led to an increase in the network complexity, the number of parameters, the amount of training resources required to train the network, prediction latency, etc.

Natural language models such as GPT-3 now cost millions of dollars [5] to train just one iteration. This does not include the cost of trying combinations of different hyper-parameters (tuning) or experimenting with the architecture manually or automatically. These models also often have billions (or trillions) of parameters.

At the same time, the incredible performance of these models also drives the demand for applying them on new tasks that were earlier bottlenecked by the available technology. This creates an interesting problem, where the spread of these models is rate-limited by their efficiency.

More concretely, we face the following problems as we go into this new era of deep learning where models are becoming larger and are spreading across different domains:

The core challenge that we identified above is efficiency. While efficiency can be an overloaded term, let us investigate two primary aspects.

If we were to be given two models performing equally well on a given task, we might want to choose a model which does better in either one or ideally both of the above aspects. If one were to be deploying a model on devices where inference is constrained (such as mobile and embedded devices) or expensive (cloud servers), it might be worth paying attention to inference efficiency. Similarly, if one is training a large model from scratch on either with limited or costly training resources, developing models that are designed for training efficiency would help. 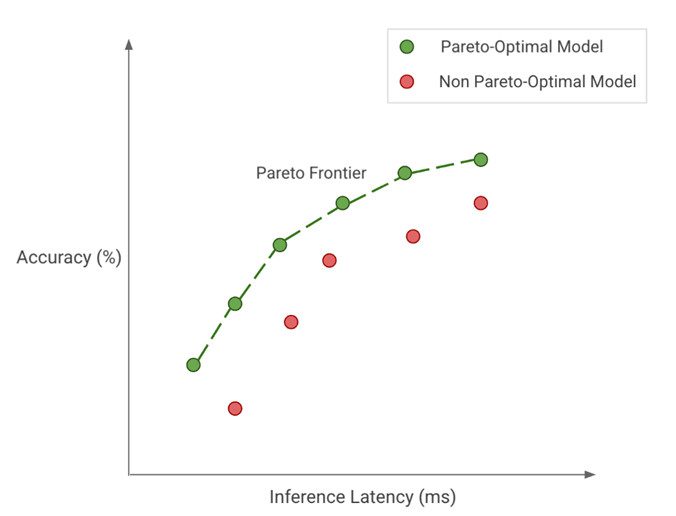 Figure 2: Pareto-optimality: Green dots represent pareto-optimal models (together forming the pareto-frontier), where none of the other models (red dots) get better accuracy with the same inference latency or the other way around.

Regardless of what one might be optimizing for, we want to achieve pareto-optimality. This implies that any model that we choose is the best for the tradeoffs that we care about. As an example in Figure 2, the green dots represent pareto-optimal models, where none of the other models (red dots) get better accuracy with the same inference latency or the other way around. Together, the pareto-optimal models (green dots) form our pareto-frontier. The models in the pareto-frontier are by definition more efficient than the other models since they perform the best for their given tradeoff. Hence, when we seek efficiency, we should be thinking about discovering and improving on the pareto-frontier.

Efficient Deep Learning can, in turn, be defined as a collection of algorithms, techniques, tools, and infrastructure that work together to allow users to train and deploy pareto-optimal models that simply cost lesser resources to train and/or deploy while achieving similar results.

Now that we have motivated the problem, in the next post, we will discuss the five pillars of efficiency in Deep Learning.

Bio: Gaurav Menghani (@GauravML) is a Staff Software Engineer at Google Research, where he leads research projects geared towards optimizing large machine learning models for efficient training and inference on devices ranging from tiny microcontrollers to Tensor Processing Unit (TPU)-based servers. His work has positively impacted > 1 billion active users across YouTube, Cloud, Ads, Chrome, etc. He is also an author of an upcoming book with Manning Publication on Efficient Machine Learning. Before Google, Gaurav worked at Facebook for 4.5 years and has contributed significantly to Facebook’s Search system and large-scale distributed databases. He has an M.S. in Computer Science from Stony Brook University.