By Thomas Bouché, Data Scientist on July 26, 2022 in Machine Learning

In the rest of this article, we will focus on a step-by-step data drift study using Eurybia an open-source python library. Detecting data drift is an important step to ensure the quality of machine learning models in production. This detection strongly favors robust AI maintainability over time.

What is Data Drift and Why Should You Care?

As such, historical data used to train the model and data used to predict the results might differ. This difference between datasets is named data drift.

Production ML models sometimes face performance drop over time. This decrease can be attributed either (or both) to the operational use or to the data drift.

How to Detect Data Drift?

To detect data drift, several methods such as comparing the distributions of the dataset features using statistical tests are available.

The python library Eurybia uses a method consisting in training a binary classification model (named “datadrift classifier”). This model tries to predict whether a sample belongs to the training/baseline dataset or to the production/current dataset.

How the datadrift classifier works, image by Author

Data Drift: What Are We Looking For?

What feature changed the most ?

Feature importance of each feature included in the “datadrift classifier” can be extracted. It allows to prioritize the study of features that changed the most.

Does the data drift affect the model predictions ?

What is the variation of each feature?

It is possible to observe the feature distribution of each feature in both baseline and current datasets.

What is the impact of data drift?

Eurybia plots the predicted probabilities distributions based on the baseline dataset and the production dataset. We can measure the difference between this distibution with the Jensen Shannon Divergence.

Can we measure the data drift?

You can install the package through pip:

In the rest of this article, we will focus on a step-by-step data drift study using Eurybia.

We will use the famous “House Prices” dataset from Kaggle. Data will be split into two distinct datasets. Data from 2006 will be used to train a regressor able to predict the selling price of a house. Then, the price of houses sold in 2007 will be predicted using the previously created model.

We will then try to detect the drift of this regressor, based on the data drift of 2006 vs. 2007 datasets.

And use Eurybia to detect data drift…

How to Understand Eurybia’s Outputs

Eurybia is designed to generate an HTML report for analysis. All the plots provided in the HTML report are also available in Jupyter notebooks. 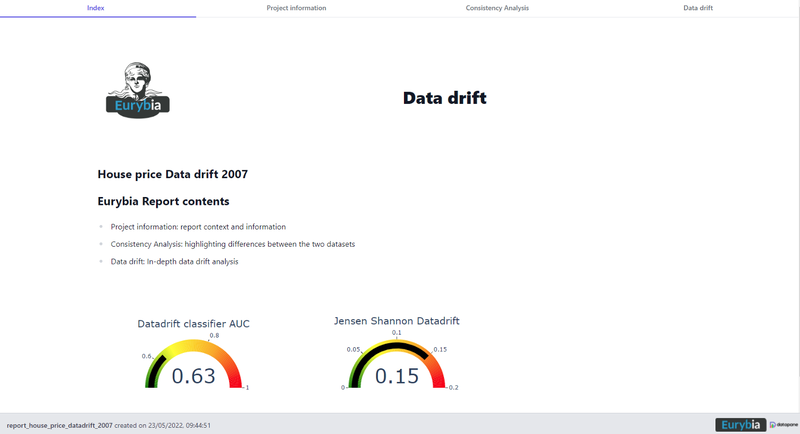 The report can be browsed with tabs and is separated as follows:

The data drift detection method is based on the ability of a model classifier to identify whether a sample belongs to one or another dataset. For this purpose, a target (0) is assigned to the baseline dataset and a second target (1) to the current dataset. A classification model (catboost) is trained to predict this target. As such, the data drift classifier performance is related to the difference between two datasets. A marked difference will lead to an easy classification (final AUC close to 1). Similar datasets will lead to poor data drift classifier performance (final AUC close to 0.5). 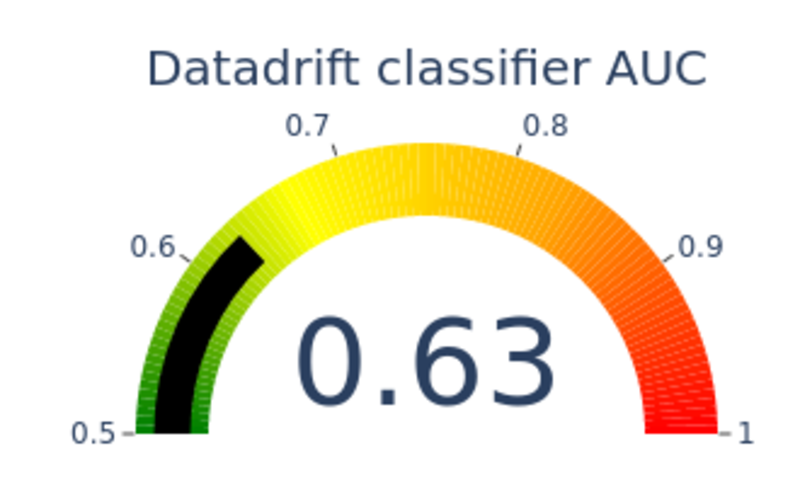 Importance of features in data drift

Bar chart representing the feature importance of each variable included in the “datadrift classifier”. 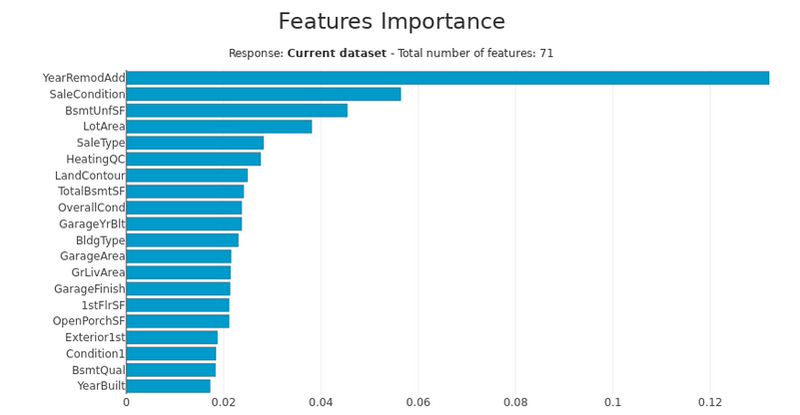 Importance of features in data drift, image by Author

This graph highlights variables that drifted the most. This might help to prioritize the subsequent deeper study of specific variables. 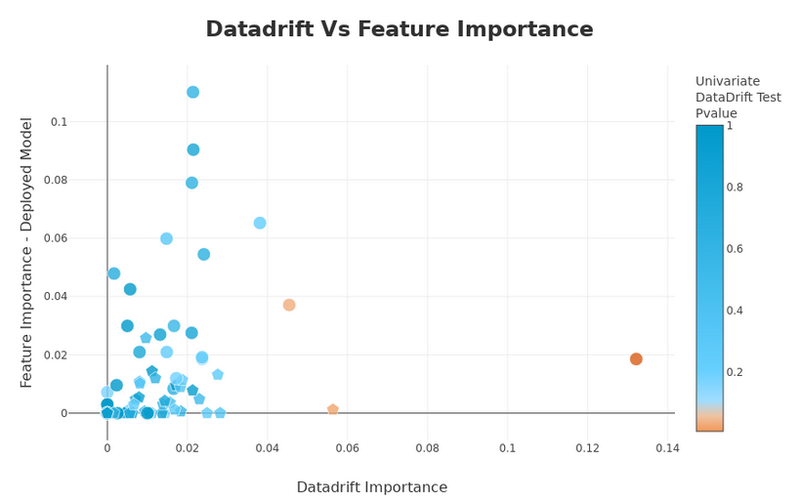 Graphical interpretation based on the feature location:

The univariate analysis is supported by the graphical analysis of the 2 datasets’ distributions, making easier the study of the most important feature for drift detection. 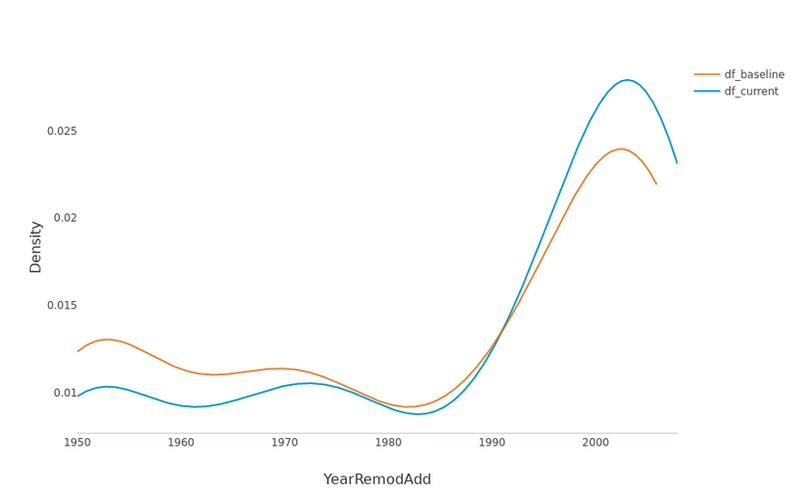 With the Eurybia report, in the drop-down menu, the features are sorted by their importance in the data drift classification. For categorical features, the possible values are sorted by descending difference between the two datasets.

The distribution of predicted values helps the visualization of output predictions provided by the deployed model on both baseline and current datasets. A difference in distributions might reflect a data drift. 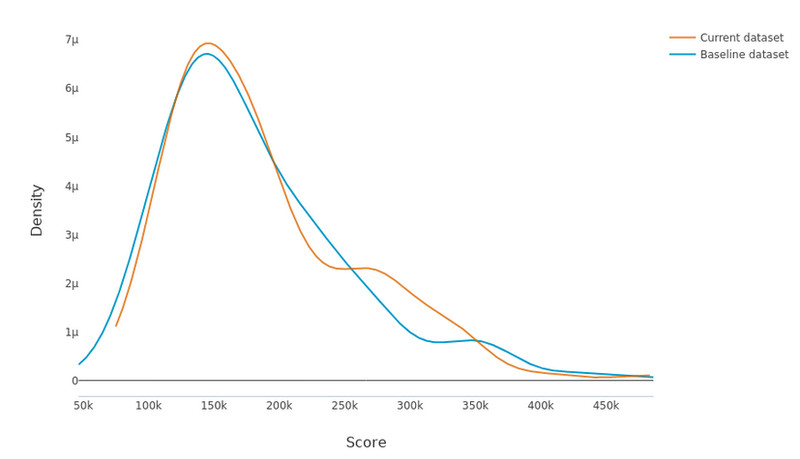 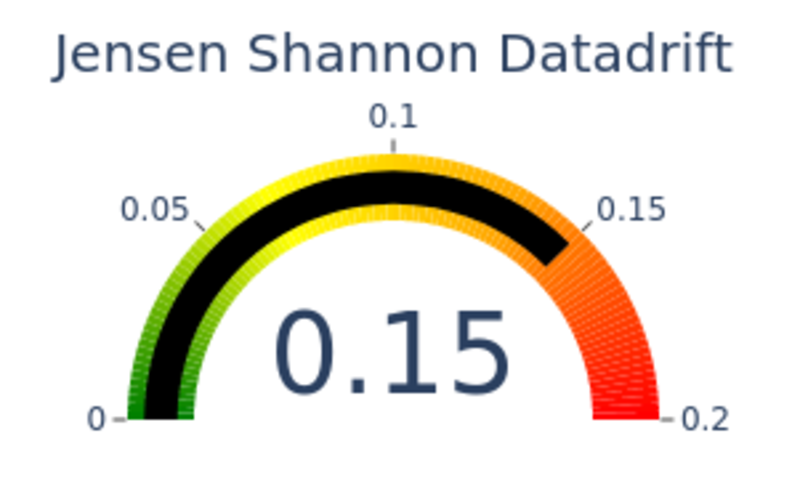 Eurybia can compile the data drift over the years with sales up to 2010. 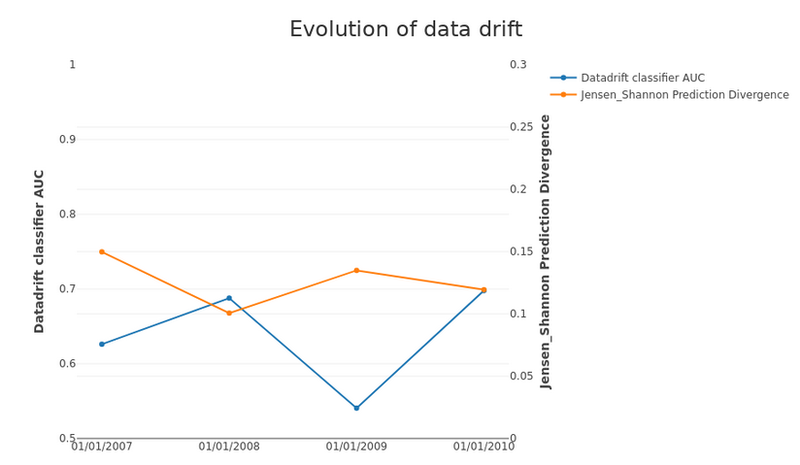 While AUC striclty focuses on data evolution, JSD evaluates the impact of data evolution on the predictions of the deployed model.

In other words, a marked drift of a single variable with low feature importance for the deployed model should cause a high AUC but potentially a low JSD.

If You Want To Go Further…

Tutorials on the different uses of Eurybia can be found here.

I hope that Eurybia will be useful in monitoring ML models in production. Any feedback and ideas are very welcomed..! Eurybia is open source! Feel free to contribute by commenting on this post or on the GitHub discussions.

Thomas Bouché is a Data Scientist at MAIF.