For this tutorial, we will work through examples to understand how different mehtods for combining Pandas DataFrames work.

By Kanwal Mehreen, Software Engineering Student at NUST on September 2, 2022 in Python 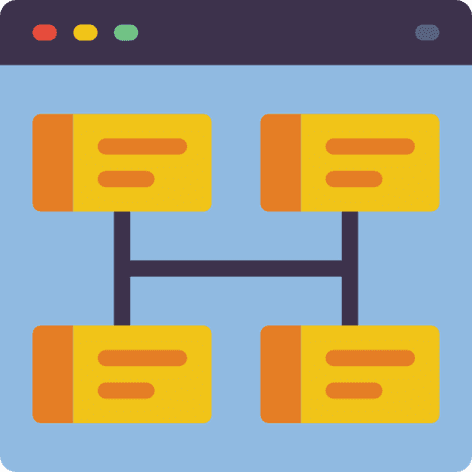 In many Real-Life Scenarios, our data is placed in different files for the sake of management and simplicity. We often need to combine them into a single, larger DataFrame for analysis. Pandas package comes to our rescue by providing us with various methods to combine the DataFrames like concat and merge. In addition, it also provides the utilities for comparison purposes.

We will work through the examples to understand how both methods work. For this tutorial, we will assume that you have basic knowledge about Python and Pandas.

If the format of the two DataFrames is the same, we opt for the .concat() method. It appends either the columns or rows from one DataFrame to another. The .concat() takes full responsibility for performing the concatenation operation along the axis. Before we dive into its details, let us have a quick look at the function syntax and its parameter.

Though there is much going on,  we will focus on the prime parameters only : 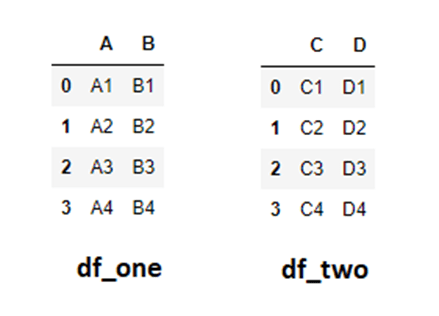 Assuming that columns A, B, C & D represent different functionalities but the index number refers to the same id, it makes more sense to join the C, and D rows to the right of df_one. Let's do it,

If we continue our above assumption and concatenate them by rows, then the resulting DataFrame will have a lot of missing data in form of NaN values. The reason is simple, let's say for index = 0 in df_two we cannot place it directly under columns A and B as we considered them to be separate functions for which the value is not present. Hence pandas will automatically create a complete row for A, B, C, and D with missing values in their respective columns.

Notice that we have the duplicate index in our final result. This is because by default ignore_index is set to False which saves the index of DataFrames as it is present originally. This may not be useful in our case so we will set ignore_index = True.

If the columns in both the DataFrames represent the same thing and are just named differently, then we can rename the columns before concatenating.

Merging or joining the dataFrames is different from concatenating. Concatenating means just stacking up one dataFrame on another along the desired axis.  While joining works just like the joins in SQL. We can combine the dataFrames based on a unique column. These methods have high performance and perform significantly better. It is useful when one DataFrame is the “lookup Table” containing additional data that we want to join to the other. Let's take a look at its syntax and parameters:

Let's take a look at its prime parameters and what are they for :

Consider an example of sports and a library dataFrame and assume that the “name” column in both the DataFrames is unique and can be used as the primary key. 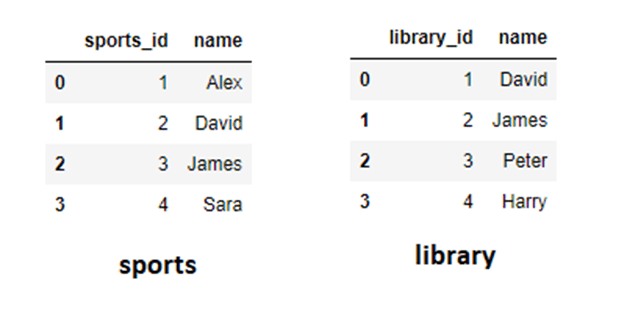 For both of them, the order in which you place the dataFrame in the .merge() method doesn’t matter as the final result would still be the same. If we consider the two DataFrames as the two sets then the inner join would refer to their intersection while the outer join to their union.

Firstly, Let us modify our sports table to make the “ name” column an index by using the set_index() method.

Now we will apply the inner operation and set the value of left_index= True if we are taking sports as our left DataFrame.

Notice that it shows the same result as we did earlier for the inner join.

Let us make a small modification to our original dataFrames by changing the sports_id and login_id as the id. Now although the name is the same, but we are referring to different ids. Pandas is smart enough to identify it and it adds the suffixes itself. We will see later on how to customize these suffixes ourselves.

Here the id_x refers to the left dataFrame while id_y refers to the right one. Although, it does its job but for the sake of readability and cleaner code we customize these suffixes by using the suffixes attribute.

This article was intended to simplify the concept of combining the rows in Pandas. When you are extracting the data on a larger scale lets say from .csv files, it is always recommended to analyze the type and format of data before you begin to perform the joining operation. Pandas has some excellent methods in this regard too. In case of any issue, you should refer to the official documentation of Pandas. Last but not least, everything comes with practice so experiment with different DataFrames in your own time for better understanding.

Kanwal Mehreen is aspiring Software Developer who believes in consistent hard work and commitment. She is an ambitious programmer with a keen interest in the field of Data Science and Machine Learning.