If you’re someone in data science or aiming to get into a data science career, this article will give you a comprehensive analysis of the state of the field.

By Nate Rosidi, KDnuggets on October 28, 2022 in Career Advice 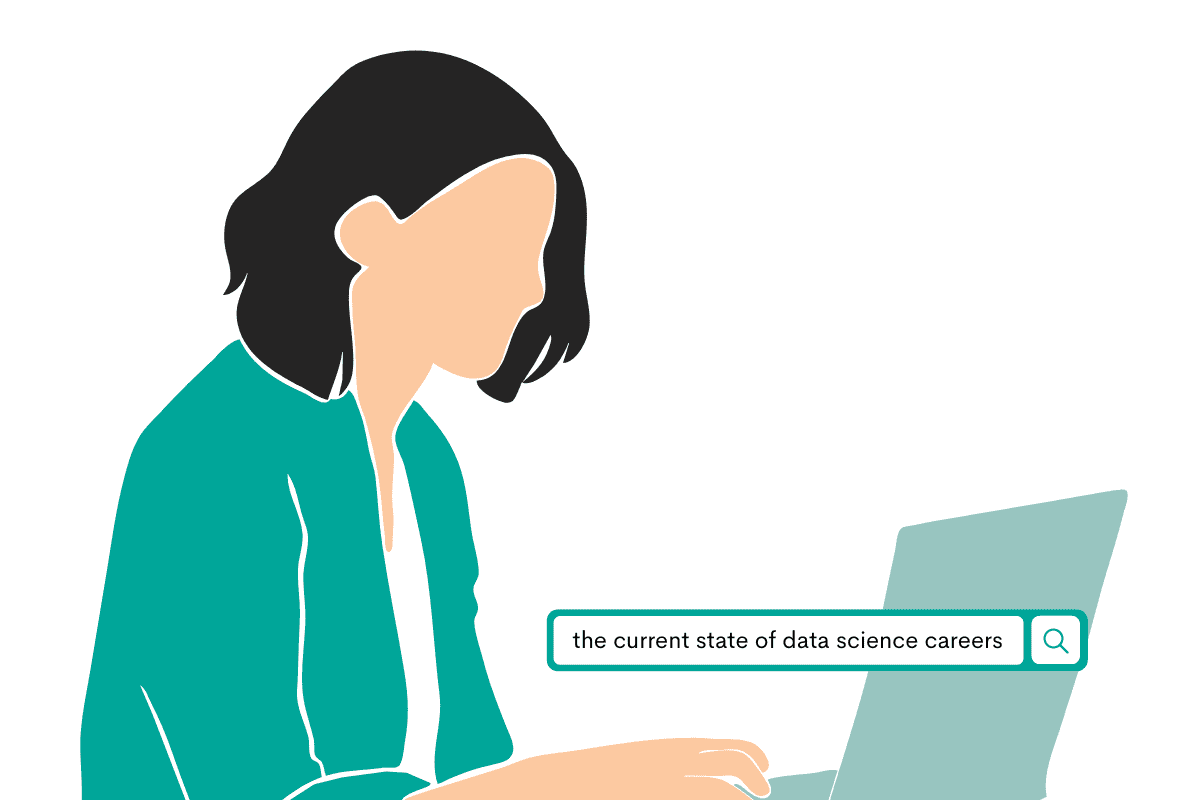 Want the #3 best job in America? You should become a data scientist. Famously called the “sexiest job” of the 21st century, the current state of data science careers is great – and looking to get even better. Plus, these days, anyone can get into a data science career through a degree, bootcamp, or even an online course.

If you’re someone in data science or aiming to get into a data science career, this article will give you a comprehensive analysis of the state of the field.

One of the most important metrics of the data science career is how it’s faring in today’s job market.

Overall, it looks sunny. There was a bit of a wobble as some tech companies have instigated hiring freezes and layoffs, but the numbers still show the data scientist career is thriving, especially in comparison to other tech roles.

Today, Indeed.com shows over 30k job openings available for data scientists. If we add data analysts and data engineers to the mix, that number jumps up to over 70k openings.

Don’t want to be a data scientist exactly? Not to worry – LinkedIn, which looks at all jobs that mention “data science” in the job description, shows over 390k job openings for data scientists across the United States. Those skills will still come in very handy in the employment market.

The Bureau of Labor Statistics estimates that there will be a 36% job growth rate over the next decade, which is much greater than most other roles they track – the average of all job growth is just 5%.

Interestingly, that’s an increase from their 2020 estimate – back then, they predicted a decade growth rate of 31.4%. We may expect to see the growth rate increase year on year, meaning there will be even more data science job roles than the BLS currently predicts.

Just because a career has a lot of job openings doesn’t mean it’s a great option for your mental well-being and overall job satisfaction.

However, because data scientists are in demand by wealthy companies, many offer incredible salaries, perks, and high job satisfaction. After all, if they don’t keep you happy, you might wander off to their competitors.

Glassdoor reports a 4.1 out of 5 score for data science job satisfaction. 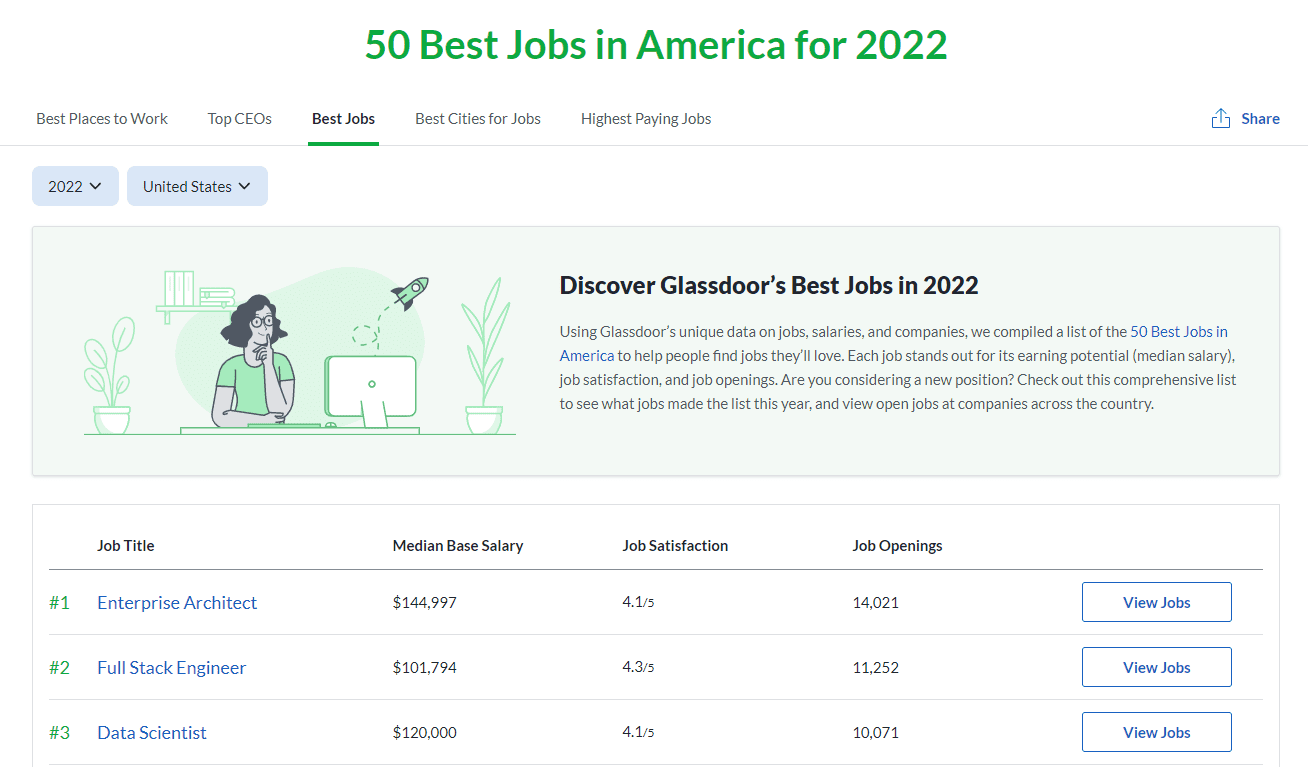 The reason the job satisfaction for data scientists is so high is due to several factors:

As a data scientist, the compensation is so good that it deserves its own subheading.

Overall, the expected data scientist salary is high – across the United States, the median base salary (not including stock options, 401k matching, healthcare coverage, or bonuses) for data scientists is $100,864.

Let’s break that down even further. The median starting salary for a data scientist in 2022 is $95k. For a mid-level data scientist, you’re looking at $130,000/year. If you’re in a managerial role, expect your salary to be closer to $190,000. And if you’re late-career? You can expect nearly a quarter of a million dollars per year as your base data science salary. 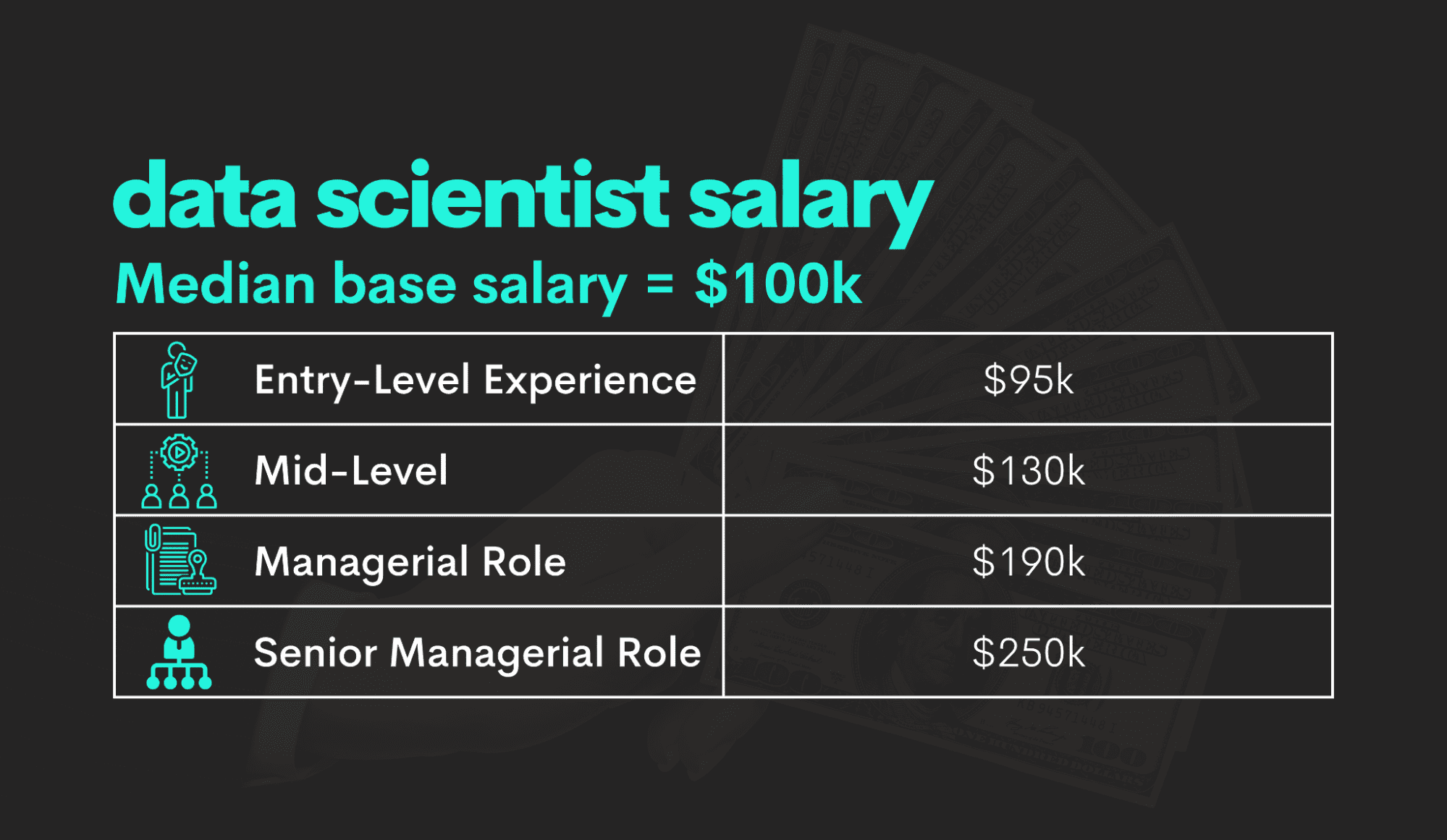 And it’s not just because data science jobs are in expensive states. Indeed.com shows that two-thirds of data scientists are satisfied with their income compared to their cost of living.

By now, you see that the state of data science careers today is excellent. I want to break that down so you can see what’s best within that bracket. Data science is fairly broad as a field. There are tons of the best data scientist employers, states, and even positions within the data science field you should consider.

Within data science, there are plenty of career options today. If you have the skills to be a data scientist, then you can choose to take on one of these jobs, too.

As data gets bigger, machine learning becomes more of a vital skill. Companies are trying to build pipelines and processes to manage that influx of data, and machine learning is one tool in that toolbox.

Your job responsibilities will revolve around creating and managing automated software programs that can build predictive models from the big data your company is flooded in.

As an ML engineer, you can expect to earn a base salary of $144k, according to ZipRecruiter.

Your base pay will be $139k, according to ZipRecruiter.

Another subtle variation. As a data scientist, you run high-level business insights. As an AI engineer, you’re responsible for creating models that power AI-based applications. You’ll need to know R and Python, and your grasp of statistics needs to be top-tier.

You can look forward to an average of $158k/year as an AI engineer.

In the data science career, not all cities are equal. Although data scientists typically earn a six-figure wage, they tend to also live in cities with high expenses and high taxes.

I looked at the top five cities for salary (data from Indeed), then calculated the monthly cost of living (Numbeo) including rent on a one-bedroom apartment and take-home salary after tax (SmartAsset). These were my results: 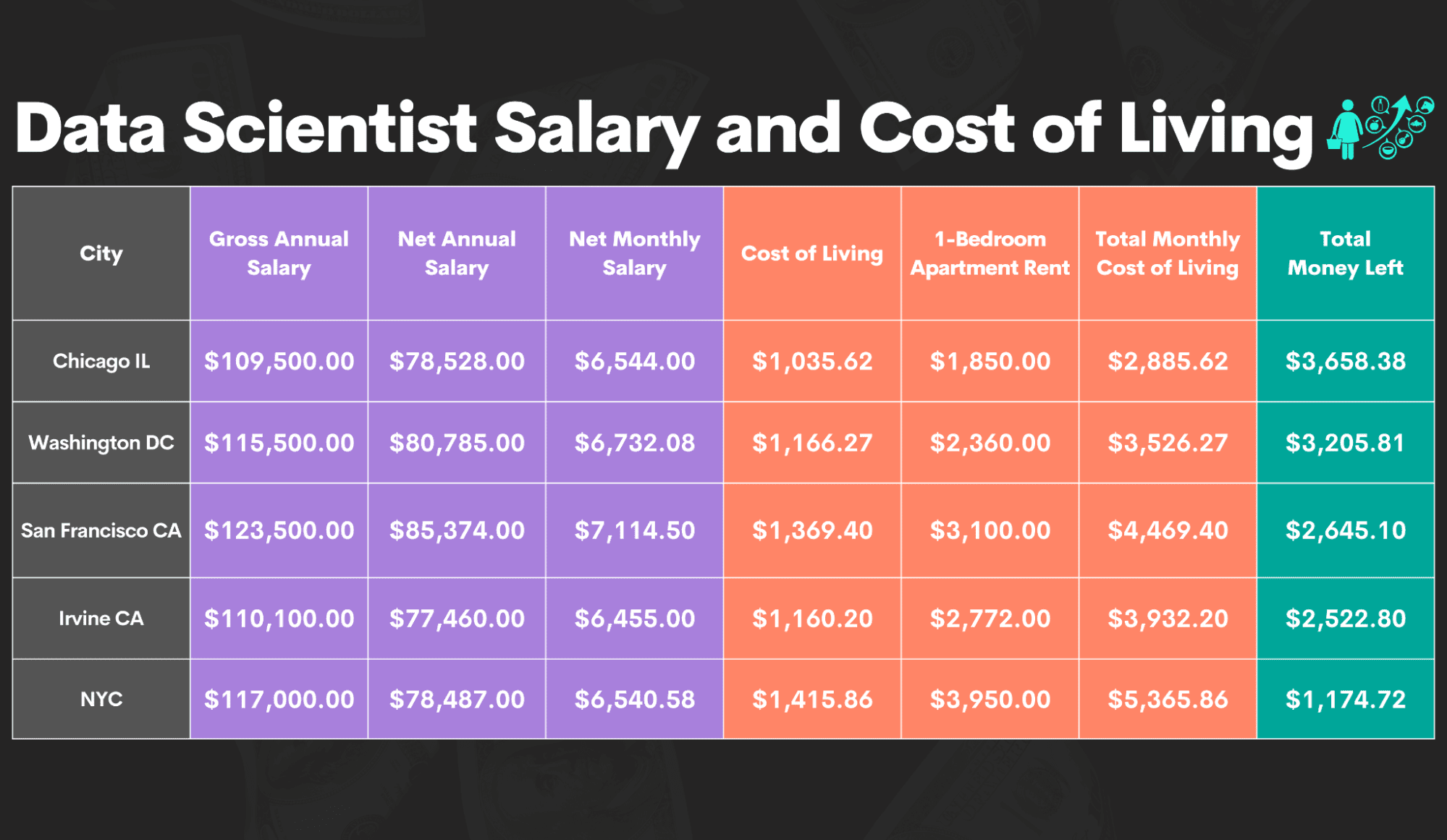 This city has the 5th highest data scientist salary, but the lowest cost of living. If you get a job in Chicago, you can expect to have a spare $3,658.38 every month – after rent, the average cost of living expenses, and taxes.

Washington, DC ranks as the second-best place to get a data science job by the same metrics. After tax, rent, and general expenses, you can expect to take home $3,205.81 per month.

Even though this was the second-most expensive place to live after New York, SF ranks #3. You can expect a net monthly profit of around $2,645.10.

Fourth on the list of best data science cities is Irvine, CA. Although rent and cost of living are cheaper, the salary is not commensurate. Your take-home net earnings after tax, monthly expenses, and rent are around $2,522.80.

Finally, New York is fifth. Although the salary is second highest in America for data scientists, rent prices in New York are as high as the skyscrapers you might be living in. Out of your $117k annual salary, you can expect to take home just a $14k surplus per year after rent, taxes, and cost of living expenses. That’s just $1,174.72 per month.

3. What Skills are Valued as a Data Scientist?

What data science skills are most valued in the career track today? It’s a mix of hard and soft skills. Don’t make the mistake of focusing on only the coding side – your business acumen and teamwork skills are just as important as your ability to write a sophisticated SQL query.

To get these, I browsed Indeed’s data scientist job descriptions and noted which skills came up most often. 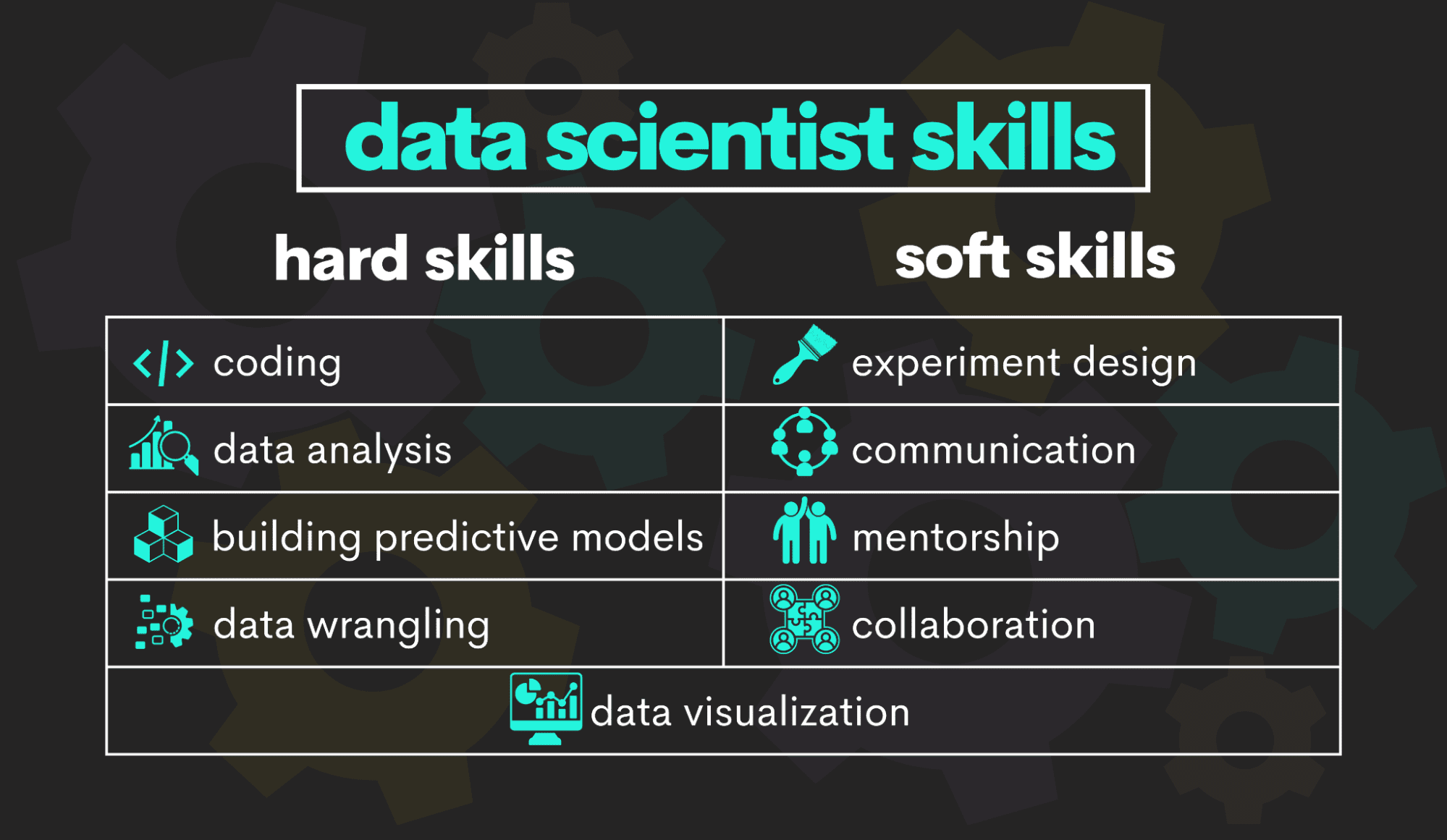 These skills make up a large part of the job.

Coding: You should be familiar with at least one, ideally two, programming languages. Despite all the new and popular coding languages, three old-guard languages are most requested by employers: Python, R, and SQL. Today’s most critical language is Python, but R is also accepted in many places. To manage databases, you should also be familiar with SQL.

Data wrangling: Extract, clean, and transform data. It’s a huge part of your job. It’s not glamorous, but it’s necessary.

Data visualization: This overlaps a little with communication skills because one of the most important things you’ll do is visualize your findings in a way that makes sense to decision-makers – who often aren’t very technical.

Soft skills are paramount to being successful as a data scientist today. Especially as the role becomes more in demand, expect to work with people from all different career paths. As a data scientist, you tie together the business and the data halves of the company.

Experiment design: This relies on statistics knowledge, but a lot of experimental design is plain common sense. Today’s data science jobs need you to be ready to problem-solve.

Communication: The evergreen classic: do you know how to talk to people that don’t understand data? You’ll be doing a lot of it.

Mentorship: Expect to mentor a lot of junior data scientists, data analysts, or business analysts. The more you help other up-and-coming data scientists, the more value you provide to the company.

Collaboration: The days of being a one-person data science team are over. Today, expect not just to communicate but collaborate with colleagues from all different branches of the company. You might be expected to create a turnover prediction model for HR or help the finance team with their forecasting. Come ready to listen.

4. What’s the Future of the Data Science Career Path?

By now, you know the current state of the data science career. What’s the future?

As I wrote above, the Bureau of Labor Statistics predicts growth: “Employment of data scientists is projected to grow 36 percent from 2021 to 2031, much faster than the average for all occupations.”

The soft skills will remain as they are – boiling down to communication and collaboration. Hard skills will probably change. As AI makes inroads into coding, you may find that your critical thinking skills, your ability to design a user-friendly graph, and your knowledge about how the business is run matter more than your SQL abilities.

Overall, the outlook is bright.

I hope you enjoyed this comprehensive look into the current state of data science careers.