The big demand for analytics, data mining, and data science professionals led to a significant jump in their salaries in 2013. Salaries are highest in US, Australia/NZ, and among self-employed and industry data scientists. See details.

What is your annual salary/income range (in USD) and employment ?

The big demand for data scientists led to a significant jump in overall compensation in 2013, including 12% increase globally, 13% increase in US/Canada, and 29% increase among self-employed.

About 80% of the respondents were from companies or were self-employed.

US and AU/NZ lead in salaries, with Western Europe and Middle East forming a strong second tier.

The following graph shows the overall landscape of analytics compensation: 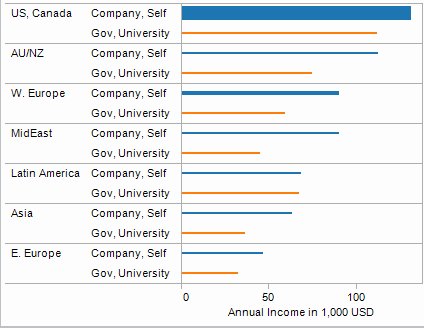 Not surprisingly, the income/salary was highest among self-employed, followed by data scientists working for a company, University/Academia, Government, and students - see table 1.

For estimating average salary we used mid-point of the range, 20K for " $180" range.

We note also that there was only 1 self-reported Unemployed/Retired, vs 6 in 2012.

In Table 2 we break down the data by region. Since the numbers of self-employed and government data scientists are relatively small, we grouped them with industry and university, respectively. Students and unemployed were excluded.

Table 2: 2013 Annual Income/Salary by Region and Employment type
excluding students and unemployed; % change is not reported when counts are too small

The following graph shows a more detailed breakdown by salary range and region. 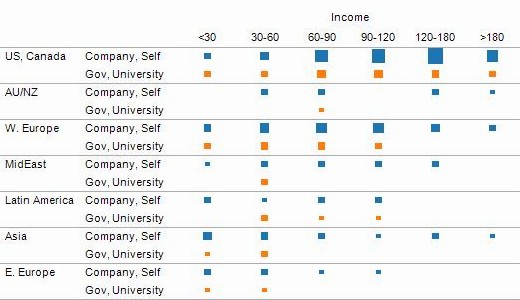