We investigate the largest LinkedIn groups for Analytics, Big Data, Data Mining, and Data Science and look at their size, growth and activity levels. We find there are 50% more discussions/week than comments, and Big Data groups are the fastest growing.


We extended our previous analysis and collected data on LinkedIn groups related to Analytics, Big Data, Data Mining, and Data Science with at least 2,000 members.

We also measured each group growth from it founding to April 20, and the 5 groups with the fastest growth are below. Note that the two fastest growing groups start with "Big Data", another evidence of the "Big Data" buzz.

The chart below shows average comments/week vs average discussions/week for all 30 groups, with a circle size proportional to group size and darker color corresponding to faster growth. Group name abbreviations and full stats in the table below. 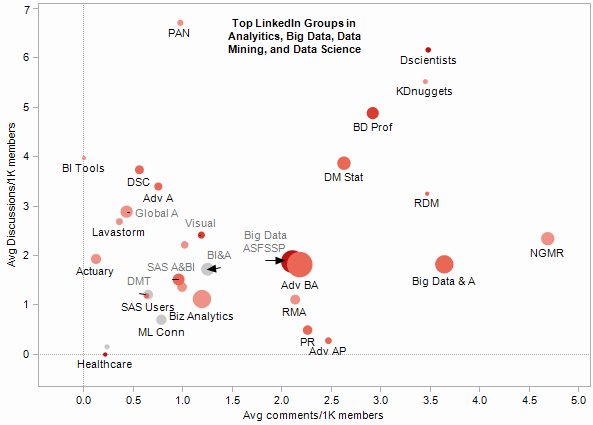 We note that a large cluster of groups has about 1 comment/week per 1000 members. A second cluster includes two biggest groups and has about 2 comments/1000 members. A third cluster has 5 groups which are very active relative to their size. Two more groups stand out - NGMR has the highest rate of comments, and PAN has the highest rate of discussions.

Below are the 5 most active groups, with Activity = Comments + Discussions. The numbers are counts per week, averaged over 4 weeks, from Mar 11 to Apr 7, 2013.

Here is the detailed data on all 30 LinkedIn groups, with group abbreviation following the group name. Closed groups denoted by (cl). Something strange is going on with Business Intelligence & Analytics Group (BI&A) where the number of members stayed at exactly 20,000 for the past month.

Comments from the Web

An excellent bit of insightful analysis. Good on you. My first reaction was to join all the groups listed. But that is missing the very good bit of insight presented here. Personally I do not care how many posts appear as there is a great deal of waffle and overlap. I will go for the one that generate conversations. Perhaps the next step is to look at the length of the threads.