How Many Data Scientists are out there?

We examine indeed, LinkedIn, Kaggle, and other sources to investigate how many data scientists - in name and in function - are out there, and how strong is the demand.

The United States alone faces a shortage of 140,000 to 190,000 people with analytical expertise and 1.5 million managers and analysts with the skills to understand and make decisions based on the analysis of big data.

However, it seems that so far the shortage is much less.

The job title "Data Scientist" has grown tremendously in popularity, according to job site indeed.com 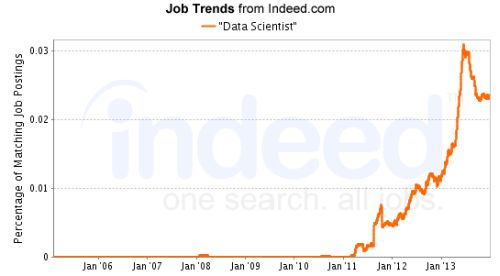 However, notice that the demand stopped increasing sometime in 2013.

As of March 13, 2014, Search for "Data Scientist" jobs (US-based) on indeed.com gives only 1,000 positions. We find about 10,000 jobs when searching for Data Scientist - without quotes, but many of these jobs have title "Scientist" or something to do with data, and not necessarily represent "Data Scientist" positions.

Of course, many people may do similar work without having the title of "data scientist".

Several estimates may be relevant.

A quick examination of the top 10 ranked Kagglers shows that only one has a title of "Data Scientist". Top 10 include neuroscience researchers, PhD mathematicians and physicists, and while they are clearly talented competitors on Kaggle, their actual job may not involve data science.

The two largest of these groups are:

Most members of these groups do not have the job title "Data scientists". There is a "Data Scientists" LinkedIn group, but it has at present only 6,750 members.

Using the public LinkedIn search interface, with the job title in quotes - I see 12,170 members with the phrase "data scientist" anywhere their profile. Using the advanced search facet to look only at profiles with a current or past title containing the phrase "data scientist", I see 6,896 results. Doing a plain keyword search will return many members that mention the words "data" or "scientist" anywhere in their profile, but the majority of those people have nothing to do with data science.

He further estimated that perhaps 150-250K people would be a match for a data scientist based on their skills and education.

I remain optimistic that data scientist is a great profession, but I doubt that there is a demand for 100,000 new data scientist positions. There may be a re-branding of existing positions, or creation of teams which collectively do the data science job.

What is your estimate for the number of data scientists?