We analyze the results of KDnuggets Software Poll, including correlations between tools, and relationships between commercial, free, and Hadoop/Big Data tools. We identify a potential capability gap. Download anonymized data and analyze it yourself.

What Analytics, Big Data, Data mining, Data Science software you used in the past 12 months for a real project?

It received a lot of attention, both from vendors and from the analytics community. However, regardless of who was in what place, the votes from over 3,000 participants give a lot of interesting data to examine - see our initial analysis below.

We prepared an anonymized version of the poll votes - scroll down to the end of the post for instructions on how to download the data. Let me know what else you find!

One interesting question is what tools are used by the same user.

The poll question asked about usage over a period of 12 months, so these tools were not necessarily used on the same project, but data scientists, like all craftsmen, tend to learn particular set of tools and use them repeatedly. Indeed, meaningful correlations we find confirm that co-occurrence of tools in the same vote is meaningful.

One way to observe tool co-occurrence is with a heat map - see below. This heat map was prepared by Ran Bi from NYU. 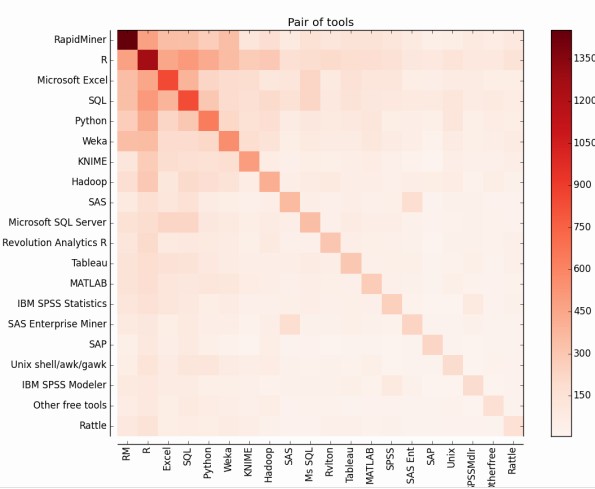 Next, we examine for each tool, what other types of tools were also used.

We note that most "lonely" tools are

The second group also correlated with tools that were part of larger platforms. Users of Pig, Mathematica , Mahout , Perl , Other Hadoop/HDFS-based tools , and Orange have used at least 8 tools (vs avg of 3.7).

while the smallest (just slightly above 1) are users of

with N free tools ranging from 4.4 to 3.6. Does this suggest a gap in capabilities of those commercial tools that users want to fill in with free tools ?

The table below has entries for all tools with at least 50 votes. For each tool, we show

The anonymized data (3285 records) is in the file www dot domain dot com/dir/kdnuggets-2014-software-poll-anon.tab (tab-delimited), where domain is the name of this site, and dir=tmp.