New KDnuggets Poll shows the growing dominance of four main languages for Analytics, Data Mining, and Data Science: R, SAS, Python, and SQL - used by 91% of data scientists - and decline in popularity of other languages, except for Julia and Scala.

Sometimes the high-level data science platform is not enough for a particular analytics task, and data scientists need to go to a lower level statistics / programming language.

The last KDnuggets poll asked
What programming/statistics languages you used for an analytics / data mining / data science work in 2014?

The results show that the main 4 languages - R, Python, SAS, and SQL - hold a commanding lead - 91% of all respondents used one of them.

Comparing with similar KDnuggets Polls
in 2013: What programming/statistics languages you used for analytics / data mining, and in 2012, we note several changes and trends.

2. Consolidation among top 4 languages - R, SAS, Python, and SQL. 91% of all voters have used at least one of them. Almost all other languages declined in their popularity for data mining tasks, including Java, Unix shell, MATLAB, C/C++, Perl, Octave, Ruby, Lisp, and F#. 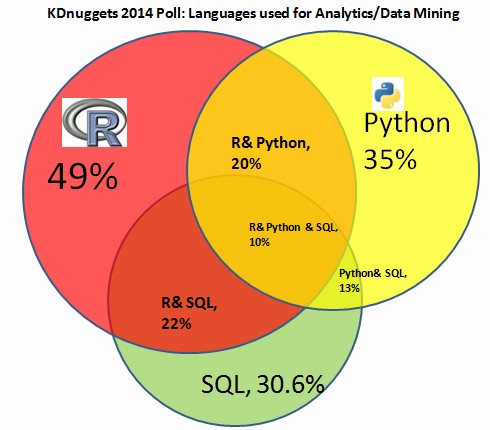 Here is a similar Venn diagram showing overlap between R, Python, and SAS. We see that SAS is much more independent from R and Python, with about 2/3 of of SAS users not using R or Python. 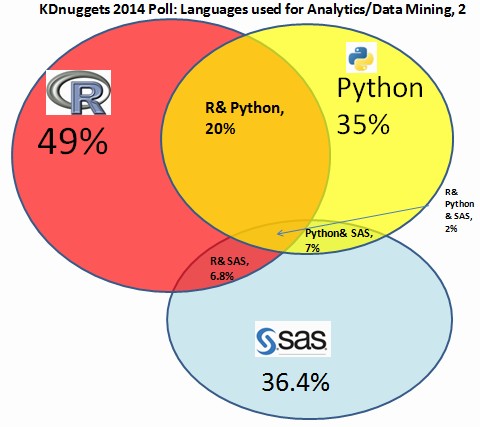 3. Languages with the highest growth in 2014 were

4. The languages with the largest decline in share of usage were

Here is the table with more details:

This is similar to 2013, but with more participation from Asia and Africa/Middle East (led by Israel and Turkey), and less from Latin America (main decline from Brazil, perhaps still depressed from the World Cup loss).