SlamData is an open source SQL-based tool designed to make accessing data in MongoDB easy for developers and non-developers alike with the goal of making application intelligence easier.

SlamData is an open source tool that makes analytics on MongoDB easy and accessible to developers and non-developers alike. We just launched v1.1, which greatly increases the power of the tool and fixes a number of issues identified in the 1.0 release.

MongoDB is currently the fastest growing and most successful NoSQL database. Companies are using the database primarily to build web and mobile applications.

Successful applications built on MongoDB end up capturing or generating large amounts of data. The process of understanding this data, which I call Application Intelligence, is vital to multiple stakeholders in the business:

MongoDB does not have rigid schemas (every “row” may have a different structure from every other “row), and allows arbitrary nesting of data (“rows” can contain other “tables”).

While this flexibility leads to faster application development and better performance and scaling properties, it comes at a cost: existing analytics tools don't work with MongoDB.

In the relational world, to answer these types of questions you’d simply use a data discovery and ad hoc analytics tool. But in the world of MongoDB, if you need Application Intelligence, you have exactly two choices:

Ultimately, neither approach is scalable, which is why we started SlamData, an open source project based on the premise that NoSQL data is here to stay, and analytics tooling needs to catch up with modern data.

Every SQL query is executed 100% in the database (or in a replica set), and operates on the actual structure of the data.

This approach differs substantially from other solutions to the problem, which stream data from the database to handle complex queries, and which superimpose a fake relational view of the underlying data (even when it is not relational).

An example SlamSQL query is shown below:


In this query, documents which are doubly-nested in arrays are being used to filter and sum values in the overall result. This query would be impossible in an RDBMS, and the equivalent code for the MongoDB API would be very difficult to write, troubleshoot, and understand. 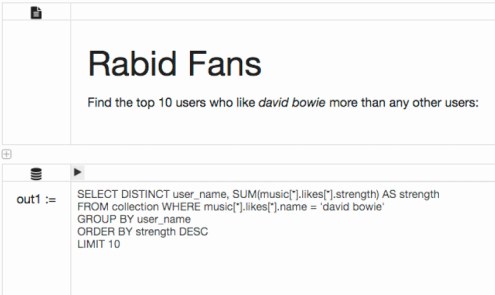 By leveraging industry standard SQL, SlamData makes it possible for a wide range of users and tools to interface with MongoDB, and helps teams quickly and easily understand the data generated or collected by their MongoDB applications.

In the current 1.1 release, all standard SQL clauses are supported, including SELECT, AS, FROM, JOIN, WHERE, GROUP BY, HAVING, OUTER JOIN, CROSS, and more. 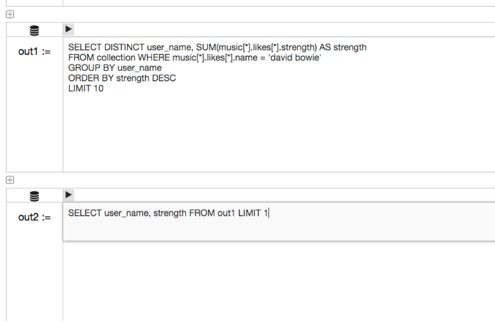 Opening up the Box

The combination of these features make SlamData “point and query”: point SlamData at your MongoDB database, and do whatever you want on any kind of data. SlamData will generate the optimal query plan and execute it 100% in the database.

If you are using MongoDB and would like to try SlamData, you can find installers on the official website, or you can compile the project from source code on Github.

SlamData is a 100% open source project, so if you like what you see, please consider supporting the project in various ways:

John A. De Goes, @jdegoes, is a founder and CTO of SlamData, and a contributor to the open source SlamData project. Previously, he was General Manager of DataMesh, Principal Architect at RichRelevance, and CEO/CTO of Precog.