R Programming: Who, Where and What

The “sexiest job” has the sexiest demand, and R is one of their leading weapons. Here, we are trying to capture how these unicorns are distributed, and also where you can move if you want to have great opportunities.

R Programming is on the rise year on year in popularity and is among the top 10 programming languages over the last few years. Data science as a discipline is becoming mainstream, driven largely by fast growing internet & software technology companies. Media, Banking and other traditional verticals are warming up to the power of data to improve efficiency and predict the next big thing. All said and done, there is also a complaint that there are not enough people around that understand both software and statistics. There aren’t enough R programmers.

Beyond the anecdotes, I wanted to check the data and confirm that the gripe is true. Without much ado, I present you the ‘Who, Where and What of R-Programmers’. No data was tortured in arriving at the conclusions. But I confess that I could not put R to use, to come up with the insights. Excel did the trick. 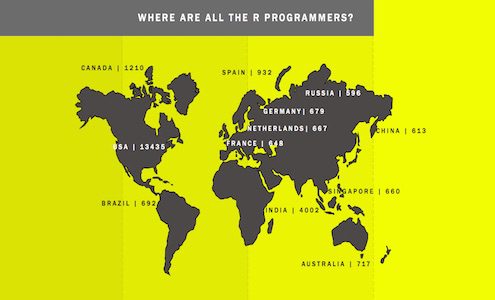 First, there are only about 50,000 R programmers in the world. Now the rumor that Google’s data scientists make more than a million a year seems like true. For those that are still recovering from the “What did I just read?” type of shock, Glassdoor has more digestible numbers. They say that a data scientist makes around $118,000 per year.

The rest of world is just waking up to R. Yes, this includes Western Europe, which has about 5000 R programmers in all. All of Asia, Africa, Middle East, South America and Eastern Europe have less than 500 R Programmers each in some cases and low double digits in most cases. Yemen has one R programmer. He or She must be feeling very lonely.

In terms of the age of the R programmer community, it looks like experience wins. That’s understandable, given that one needs to understand and appreciate the workings of an organization before trying to make sense of the data it puts out. 60% of R Programmers come with more than 6 years of work experience. In fact, at 30%, people with more than 10 years of experience are the biggest cohort of R Programmers, grouped by work experience.

So, what do you do if you are an R programmer or if you are hiring one:

I’ve looked into the industries and functions that the R Programmers tend to partake in. If you are looking out for such insights and/or a fan of brightly colored infographics you could find them at https://contractiq.com/.

Bio: Ashwin Ramasamy is a Founder of ContractIQ, both a platform and a band of experts that match you with a pre-qualified set of elite app development agencies from around the world.