The 123 Most Influential People in Data Science

Data Science is a hot sector, obviously. Like most geeky memes, the hot-bed of social media is on Twitter. Loads of companies are launching in the space. But who are the real influencers? And how do they behave on Twitter? We turned to Marshall Kirkpatrick’s influencer mapping and marketing tool Little Bird to pull in a list and do some analysis. It’s getting rave reviews as a way to gain insights into influencers in networks that are not obvious from simple Twitter counts.

Unlike simple follower counts, Little Bird builds a true influencer network map by measuring how often influencers retweet other influencers and the density of network activity. This goes into what they call their “Influencer Score.” It’s not a perfect methodology but its relatively solid as a way of assigning contextual relevance values and true influencer status rather than just counting Tweets.

To set Little Bird up to run an influencer graph for your topic, you need to feed it a handful of accounts you know are influencers in the area you are focused on. We put in six Twitter handles that we knew were serious influencers (including Hilary Mason, KDnuggets and DataScienceCentral) and then set LittleBird to work doing the network analysis and metrics. Little Bird returned 123 influencers from all over the world.*

It was a fabulous list with tons of room for interesting analysis. From the spreadsheet exported from Little Bird, I pushed the data into Silk.co’s online data and website publishing platform. Here’s what we found. 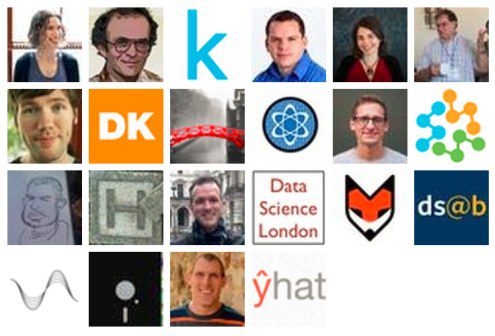 Among the Top 10 Data Science influencers, only two rated an Insider Score score of 50 or above. Influencers were relatively well distributed by type including practitioners, company accounts, media sources, a VC and even one data science-focused NGO. 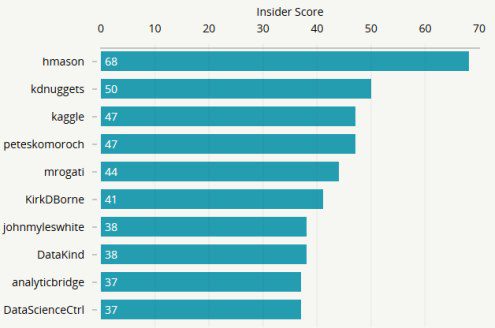 We looked at Twitter accounts that Little Bird assigned an Insider Score of 10 or greater. 84% of them were in North America. Europe and EU-region countries capture 12%. The upshot? Data Science influence is centered squarely in North America.

The Long Tail of Insider Influence

There are many more correlations you can explore and discover on the graph database and the visualization engines you will find on the Silk “Most Influential Data Science Accounts”. Please take it for a spin. You can also always view all the data in table format.