The Kalman filter has numerous applications, including IoT and Sensor fusion, which helps to determine the State of an IoT based computing system based on sensor input.

This two part paper is created as part of the Data Science for IoT practitioners course(starting Nov 10) by Ajit Jaokar.  Kalman filters and sensor fusion is a hard topic and has implications for IoT.  I  welcome comments and feedback at ajit.jaokar at futuretext.com. Please email us at info at futuretext.com if you want to join the Data Science for IoT practitioners course.

Kalman filtering is an algorithm that uses a series of measurements observed over time, containing statistical noise and other inaccuracies, and produces estimates of unknown variables that tend to be more precise than those based on a single measurement alone (adapted from Wikipedia).  The Kalman filter has numerous applications in technology – including IoT.  Specifically, Kalman filters are used in Sensor fusion. Sensor fusion helps to determine the State (and also the overall Context) of an IoT based computing system which relies on inferring the combined meaning from different sensors.

Prediction of water level: Suppose you have a  model that predicts river water level every hour (using the usual inputs).  You know that your model is not perfect and you don’t trust it 100%. So you want to send someone to check the river level in person. However, the river level can only be checked once a day around noon and not every hour. Furthermore, the person who measures the river level cannot be trusted 100% either. So how do you combine both outputs of river level (from model and from measurement) so that you get a ‘fused’ and better estimate?  Source: Introduction to Kalman filters – CEE 6430: Probabilistic Methods in Hydrosciences – Fall 2008

Determining location of a Truck: Consider the problem of determining the precise location of a truck. The truck can be equipped with a GPS unit that provides an estimate of the position within a few meters. The GPS estimate is likely to be noisy; readings ‘jump around’ rapidly, though always remaining within a few meters of the real position. In addition, since the truck is expected to follow the laws of physics, its position can also be estimated by integrating its velocity over time, determined by keeping track of wheel revolutions and the angle of the steering wheel. This is a technique known as dead reckoning. Typically, dead reckoning will provide a very smooth estimate of the truck’s position, but it will drift over time as small errors accumulate.

In this example, the Kalman filter can be thought of as operating in two distinct phases: predict and update. In the prediction phase, the truck’s old position will be modified according to the physical laws of motion (the dynamic or “state transition” model) plus any changes produced by the accelerator pedal and steering wheel. We also update the covariance between the two variables.

Not only will a new position estimate be calculated, but a new covariance will be calculated as well. The covariance is proportional to the ‘greater certainity’ metric (perhaps speed of the truck). Subsequent updates will create more accurate readings. 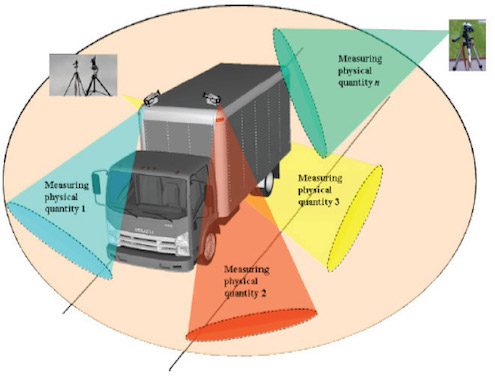 Image: http://spie.org/x108745.xml depicting multisensory surveillance for a moving vehicle. Note that it is different application of Kalman filters from the one discussed above – but the same principles apply. Example of Truck positioning – adapted from wikipedia

Here are some initial points:

In the next part of this post, we explore the workings of Kalman filters and their impact on sensor fusion on IoT.

Many thanks to Dr Gary Butler – founder and CEO of Camgian Microsystems and Karthik Padbanabhan – manager Smart mobility at Ford Motor Company for their comments.