Which Movie Sequels Are Really Better? A Data Science Answer

The internet is filled with polls and lists of sequels that are better or worse movie in the series. Yet such rankings are often based on personal judgement and rarely on data and statistics. Here is our solution to analyze and visualize the movie series.

How often are sequels better than the original movie? The internet is filled with polls and lists of sequels that are considered better or more successful than the first movie in the series. These lists often cite Spiderman, Star Trek, or the Godfather. Yet such rankings are often based on personal judgment and rarely on data and statistics.At Silk we collected 289 movie series/franchises, for a total of almost 1,000 movies. We then analyzed IMDb information to come up with a data-driven overview of the best movie prequels, sequels, and remakes. You can follow the project to get more updates.

The First Movie is (Almost) Always Better Than the Last

Only 11% of the analyzed series had the last movie getting a higher IMDb rating than the first one. This small club of 31 includes series like Mad Max, Star Trek, Batman, Fast & Furious and X-Men. In seven series, the last movie had the exact same IMDb as the first. And in the remaining 87% of the series, the first movie was better than the last.

The award for the worst series finale of all goes to Jaws. Jaws The Revenge (IV) scored a lousy 2.8 on IMDb. Spielberg’s Jaws 1, on the other hand, has reached 8.1.

By How Many IMDb Rating Points is the First Movie Better Than the Last? 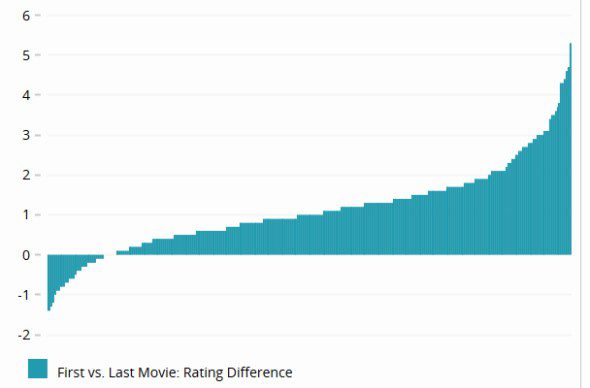 Comparing first and last episodes tells only part of the story. Jaws IV is the last of a series in which every sequel was rated worse than the previous movie.

But the pattern isn’t always so clear. Take Jurassic Park. Jurassic World, the last movie of the series so far, is rated only 0.8 points less than Jurassic Park 1. However, a timeline of the four Jurassic Park movies shows that all the previous sequels were doing much worse than the original. The IMDb rating of Jurassic Park II is 1.6 points lower than the first, and Jurassic Park III does ever worse.

9 Movie Series Where Sequels That Are Better Than the Original

The data indicates that more often than not, the order of release of a movie in a series is a good predictor of its IMDb rating. In our sample of 289 series, we found only 49 cases in which the first episode is not the one with the highest rating. Among the highest-rates sequels, there’s Nolan’s Batman: The Dark Knight, Sergio Leone’s The Good, The Bad and The Ugly, and Peter Jackson’s The Return of the King. Browse all the others in this gallery.

While resulting in lower IMDb ratings, sequels usually have an higher budget. Let’s take as an example the three series we looked at before: Jaws, Jurassic Park and Star Wars. Jaws IV, with its 2.8/10 rating, was produced with a budget almost 4 times the one of the first Jaws movie.

Jurassic World is the only clear case of higher budget and corresponding higher IMDb rating. Although it still did worse than Jurassic Park I, which was produced with $152,000,000 less.

The last three Star Wars movies release all scored worse than the first three. Yet the recent ones were each produced with at least $80,500,000 more than the previous three.

Use the following chart to filter for other movie series.

(Note: budget data is not available for all movies. It is taken from IMDb, so refer to their methodology for understanding what they include in the budget)

50 Years Between the First and Last James Bond Movie, 64 for Bambi and 57 for Cinderella. Does it Matter for IMDb Ratings?

In our sample, the first and the last movie in a series are released 10 years apart, on average. Although there are exceptions. For example, Kill Bill fans had to wait only one year before the release of Kill Bill: Vol. II. Maze Runner movies are also one year apart.

The fact that a series spans over decades doesn’t seem to have too much of an impact on IMDb ratings. For example, Jaws IV came out 12 years after the first and was rated 5.3 points less than Jaws I. The last Dungeons & Dragons movie also came out 12 years after the first, yet it managed to improve the rating of the original by 0.8 points. Mad Max and Star Trek are other two series that do well despite the age. Their latest movies, released more than 30 years after the start of the series, both did better than the first. The same cannot be said for other long-term series, like Amityville and Texas Chain Saw Massacre.

Chart filters out series made up of only two movies.