Attention and Memory in Deep Learning and NLP

An overview of attention mechanisms and memory in deep neural networks and why they work, including some specific applications in natural language processing and beyond.

Attention Mechanisms in Neural Networks are (very) loosely based on the visual attention mechanism found in humans. Human visual attention is well-studied and while there exist different models, all of them essentially come down to being able to focus on a certain region of an image with “high resolution” while perceiving the surrounding image in “low resolution”, and then adjusting the focal point over time.

Attention in Neural Networks has a long history, particularly in image recognition. Examples include Learning to combine foveal glimpses with a third-order Boltzmann machine or Learning where to Attend with Deep Architectures for Image Tracking. But only recently have attention mechanisms made their way into recurrent neural networks architectures that are typically used in NLP (and increasingly also in vision). That’s what we’ll focus on in this post.

What problem does Attention solve?

To understand what attention can do for us, let’s use Neural Machine Translation (NMT) as an example. Traditional Machine Translation systems typically rely on sophisticated feature engineering based on the statistical properties of text. In short, these systems are complex, and a lot of engineering effort goes into building them. Neural Machine Translation systems work a bit differently. In NMT, we map the meaning of a sentence into a fixed-length vector representation and then generate a translation based on that vector. By not relying on things like n-gram counts and instead trying to capture the higher-level meaning of a text, NMT systems generalize to new sentences better than many other approaches. Perhaps more importantly, NMT systems are much easier to build and train, and they don’t require any manual feature engineering. In fact, a simple implementation in TensorFlow is no more than a few hundred lines of code.

Most NMT systems work by encoding the source sentence (e.g. a German sentence) into a vector using a Recurrent Neural Network, and then decoding an English sentence based on that vector, also using a RNN. 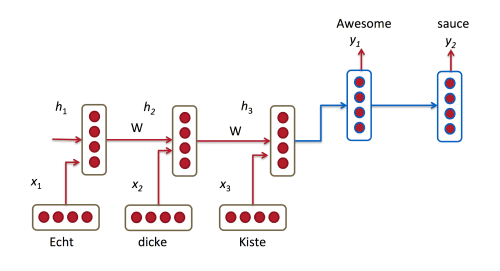 In the picture above, “Echt”, “Dicke” and “Kiste” words are fed into an encoder, and after a special signal (not shown) the decoder starts producing a translated sentence. The decoder keeps generating words until a special end of sentence token is produced. Here, the h vectors represent the internal state of the encoder.

If you look closely, you can see that the decoder is supposed to generate a translation solely based on the last hidden state (h3 above) from the encoder. This h3 vector must encode everything we need to know about the source sentence. It must fully capture its meaning. In more technical terms, that vector is a sentence embedding. In fact, if you plot the embeddings of different sentences in a low dimensional space using PCA or t-SNE for dimensionality reduction, you can see that semantically similar phrases end up close to each other. That’s pretty amazing.

Still, it seems somewhat unreasonable to assume that we can encode all information about a potentially very long sentence into a single vector and then have the decoder produce a good translation based on only that. Let’s say your source sentence is 50 words long. The first word of the English translation is probably highly correlated with the first word of the source sentence. But that means decoder has to consider information from 50 steps ago, and that information needs to be somehow encoded in the vector. Recurrent Neural Networks are known to have problems dealing with such long-range dependencies. In theory, architectures like LSTMs should be able to deal with this, but in practice long-range dependencies are still problematic. For example, researchers have found that reversing the source sequence (feeding it backwards into the encoder) produces significantly better results because it shortens the path from the decoder to the relevant parts of the encoder. Similarly, feeding an input sequence twice also seems to help a network to better memorize things.

I consider the approach of reversing a sentence a “hack”. It makes things work better in practice, but it’s not a principled solution. Most translation benchmarks are done on languages like French and German, which are quite similar to English (even Chinese word order is quite similar to English). But there are languages (like Japanese) where the last word of a sentence could be highly predictive of the first word in an English translation. In that case, reversing the input would make things worse. So, what’s an alternative? Attention Mechanisms.

With an attention mechanism we no longer try encode the full source sentence into a fixed-length vector. Rather, we allow the decoder to “attend” to different parts of the source sentence at each step of the output generation. Importantly, we let the model learn what to attend to based on the input sentence and what it has produced so far. So, in languages that are pretty well aligned (like English and German) the decoder would probably choose to attend to things sequentially. Attending to the first word when producing the first English word, and so on. That’s what was done in Neural Machine Translation by Jointly Learning to Align and Translate and look as follows: 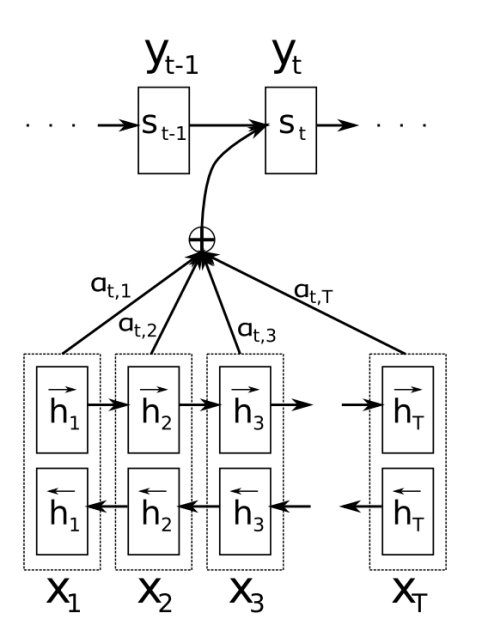 Here, The y‘s are our translated words produced by the decoder, and the x‘s are our source sentence words. The above illustration uses a bidirectional recurrent network, but that’s not important and you can just ignore the inverse direction. The important part is that each decoder output word yt now depends on a weighted combination of all the input states, not just the last state. The a‘s are weights that define in how much of each input state should be considered for each output. So, if a3,2 is a large number, this would mean that the decoder pays a lot of attention to the second state in the source sentence while producing the third word of the target sentence. The a‘s are typically normalized to sum to 1 (so they are a distribution over the input states).

A big advantage of attention is that it gives us the ability to interpret and visualize what the model is doing. For example, by visualizing the attention weight matrix a when a sentence is translated, we can understand how the model is translating: 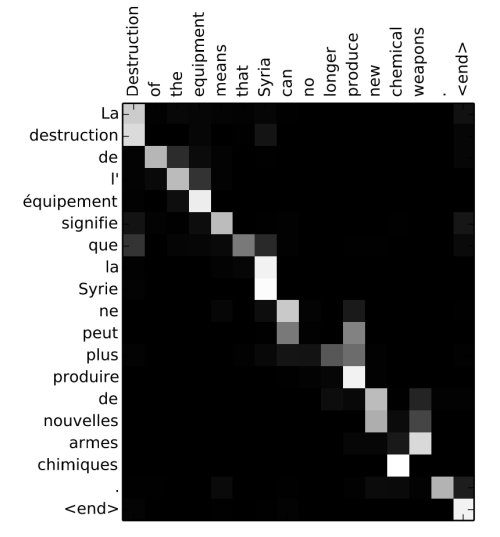 Here we see that while translating from French to English, the network attends sequentially to each input state, but sometimes it attends to two words at time while producing an output, as in translation “la Syrie” to “Syria” for example.