A Tutorial on the Expectation Maximization (EM) Algorithm

This is a short tutorial on the Expectation Maximization algorithm and how it can be used on estimating parameters for multi-variate data. 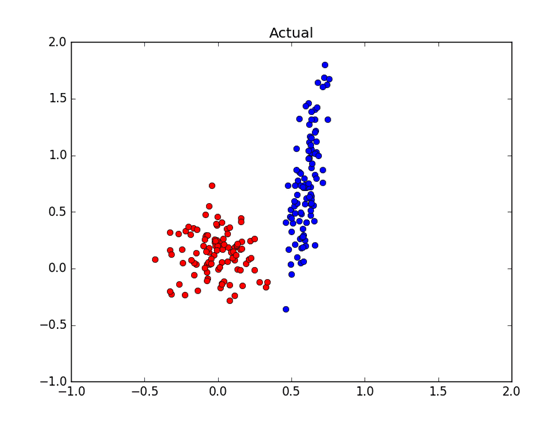 Well, we can plot the data of each dimension and estimate the means by looking at the plots. For example, we could use a histogram plot to estimate that the mean of the x’s of the blue distribution is about 0.6 and the mean of the x’s from the red distribution is about 0.0. By looking at the spread of each cluster we can estimate that the variance of blue x’s is small, perhaps 0.0, and variance of red x’s is about 0.025. That would be a pretty good guess since the actual distribution was drawn from N(0.6, 0.003) for blue and N(0.02, 0.03) for red. Can we do better than looking at the plots? Can we come up with a good estimates for the means and the variances in a more robust way? 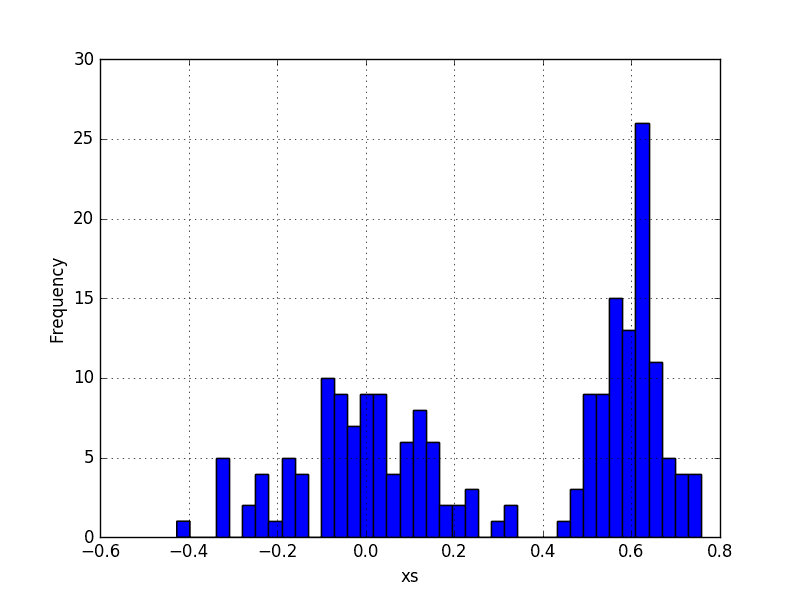 In a single modal normal distribution this hypothesis h is estimated directly from the data as:

Which are simply the trusted arithmetic average and variance. In a multi-modal distribution we need to estimate h = [ m1,m2,...,mK; sigma12,sigma22,...,sigmaK2 ]. The EM algorithm is going to help us to do this. Let’s see how.

We begin with some initial estimate for each mk~ and sigmak2~. We will have a total of K estimates for each parameter. The estimates can be taken from the plots we made earlier, our domain knowledge, or they even can be wild (but not too wild) guesses. We then proceed to take each data point and answer the following question – what is the probability that this data point was generated from a normal distribution with mean mk~ and sigmak2~? That is, we repeat this question for each set of our distributional parameters. In Figure 1 we plotted data from 2 distributions. Thus we need to answer these questions twice – what is the probability that a data point xi, i=1,...N, was drawn from N(m1~, sigma12~) and what is the probability that it was drawn from N(m2~, sigma22~). By the normal density function we get:

The individual probabilities only tell us half of the story because we still need to take into account the probability of picking N(m1~, sigma12~) or N(m2~, sigma22~) to draw the data from. We now arrive at what is known as responsibilities of each distribution for each data point. In a classification task this responsibility can be expressed as the probability that a data point xi belongs to some class ck:

In Equation 5 we introduce a new parameter omegak~ which is the probability of picking k’s distribution to draw the data point from. Figure 1 indicates that each of our two clusters are equally likely to be picked. But like with mk~ and sigmak2~ we do not really know the value for this parameter. Therefore we need to guess it and it is a part of our hypothesis:

If we are making hard cluster assignments, we will take the maximum P(xi belongs to ck) and assign the data point to that cluster. We repeat this probabilistic assignment for each data point. In the end this will give us the first data ‘re-shuffle’ into K clusters. We are now in a position to update the initial estimates for h to h'. These two steps of estimating the distributional parameters and updating them after probabilistic data assignments to clusters is repeated until convergences to h*. In summary, the two steps of the EM algorithm are:

Bio: Elena Sharova is a data scientist, financial risk analyst and software developer. She holds an MSc in Machine Learning and Data Mining from University of Bristol.