What I Learned Implementing a Classifier from Scratch in Python

In this post, the author implements a machine learning algorithm from scratch, without the use of a library such as scikit-learn, and instead writes all of the code in order to have a working binary classifier algorithm.

Machine learning can be intimidating for a newcomer. The concept of a machine learning things alone is quite abstract. How does that work in practice?

So, what the heck is a binary classifier?

A classifier is a machine-learning algorithm that determines the class of an input element based on a set of features. For example, a classifier could be used to predict the category of a beer based on its characteristics, it’s “features”. These features could include its alcohol content, aroma, appearance, etc. A machine learning classifier could potentially be used to predict that a beer with 8% alcohol content, 100 IBU and with strong aromas of oranges is an Indian Pale Ale.

A binary classifier classifies elements in two groups. Zero or one. True or false. IPA or not.

There are four steps to build and use a machine learning model. 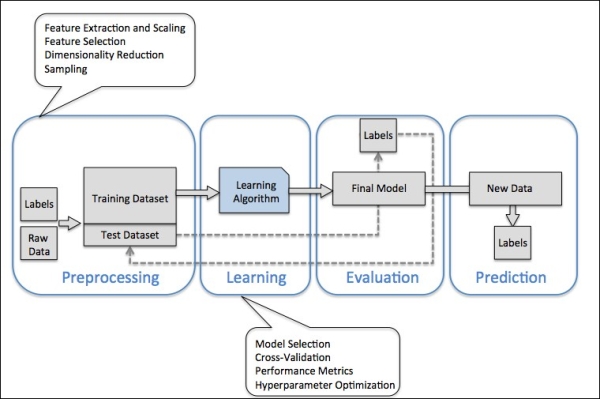 The preprocessing is the first step in building a machine learning model. At this step, you acquire and prepare the data for future usage. You clean up the data, tidy it and select the features you want to use from your data.

The following tasks can be considered as part of the “preprocessing”:

Once you have your datasets ready to be used, the second step is to select an algorithm to perform your desired task. In our case, the algorithm we selected is a binary classifier called Perceptron. There are many algorithms designed to do different tasks. They each have their strengths and weaknesses.

At this step, you can test a few algorithms, see how they perform and select the best performing one. There are a wide variety of metrics that can be used to measure the performance of a machine learning model. According to Raschka, “one commonly used metric is classification accuracy, which is defined as the proportion of correctly classified instances”. At this step, you will make adjustments to the parameters of your machine learning algorithm. These are named hyperparameters.

When the model has been “trained” on the dataset it can be evaluated on new unseen data. The goal here is to measure the generalization error. This metric measures “how accurately an algorithm is able to predict outcome values for previously unseen data”. Once you are satisfied with the results, you can use your machine learning model to make predictions.

The algorithm that we’ll be re-implementing is a Perceptron which is one of the very first machine learning algorithm.

The Perceptron algorithm is simple but powerful. Given a training dataset, the algorithm automatically learns “the optimal weight coefficients that are then multiplied with the input features in order to make the decision of whether a neuron fires or not”.

But, how does the algorithm do that?

Here’s the sequence of the algorithm:

First, we initialize an array with the weights equal to zero. The array length is equal to the number of features plus one. This additional feature is the “threshold”. It’s important to note that in the case of the Perceptron algorithm, the features must be of numerical value.

Secondly, we start a loop equal to the number of iterations n_iter. This is an hyperparameter defined by the data scientist.

Thirdly, we start a loop on each training data point and it’s target. The target is the desired output we want the algorithm to eventually predict. Since this is a binary classifier, the targets are either -1 or 1. They are of binary value.

At each iteration on a data point, if the prediction is not accurate, the algorithm will adjust the weights. During the first few iterations, the predictions are not likely to be accurate because the weights haven’t been adjusted many times. They haven’t had a chance to start converging. The adjustments are made proportionally to the difference between the target and the predicted value. This difference is then multiplied by the learning rate eta, an hyperparameter of value between zero and one set by the data scientist. The higher the eta is, the larger the correction on the weights will be. If the prediction is accurate, the algorithm won’t adjust the weights.

Parameters such as learning rate and number of iteration can seem very abstract if you jump in straight to using an algorithm from a library like scikit-learn. It’s hard to grasp what these really do. By implementing the algorithm, it’s now clear for me what they represent in the context of the Perceptron.

A higher learning rate means that the algorithm will adjust the weights more aggressively. At each iteration, the weights will be adjusted if the predicted value is inaccurate.

For me, the main learning here is how fundamental linear algebra is to this machine learning algorithm.

This learning is actually a concept I re-learned while going through the code for this post. It’s not specific to machine learning and it has nothing to do with the Perceptron.

Back in 2012 when I was learning to code Ruby on Rails, a web application development framework, I realized that typing down all of the code examples from tutorials really helped me memorize and understand the concepts. I spent weeks writing code while following tutorials. No copy and paste. I typed all the code. This may sound stupid but it was extremely helpful to grasp the concepts. During the process, I inevitably made typos and spend some time figuring out what was broken. These moments were crucial because that’s when you usually stop and think.

If you are going through the Perceptron code, don’t copy and paste the code from the repository. Type it down in your own Jupyter Notebook. Type everything. Don’t read passively. Get involved, type it down and you’ll assimilate the concepts faster.

In this post, my goal was to share my understanding of the algorithm and the learnings I’ve made while reimplementing it. However, you can do much more than simply reimplementing the model. You can actually use it with real data in order to do some simple predictions. In Python Machine Learning, Raschka uses the Perceptron to predict the class of Iris flower based on a the sepal and petal length of the flower. With actual data, you can then evaluate the model and make predictions on unseen data.

Bio: Jean-Nicholas Hould is a Data Scientist from Montreal, Canada. Author at JeanNicholasHould.com.