The Human Data Scientist: Safeguarding Your Career in the World of Automation

"Data scientist" continues to be recognized as a top career, but does this mean unending spoils for the data scientist? With large scale mass automation on the horizon for numerous professions, what can we do to safeguard our positions?

Recently, popular career site Glassdoor published its updated list of Best Jobs in America, with data scientist taking top spot for the year. Glassdoor gave the career a job score of 4.8 out of 5, a $110,000 median base salary, and noted 4,000 job openings at the time of writing.

The announcement was rather unsurprising, given the fact that it was a repeat of the previous years' findings:

According to Glassdoor list of 25 Best Jobs in America, Data Scientist is the No. 1 job! It has 1,736 current openings, median Base Salary $116,840, and good career opportunity and job score.

Just a few months ago, job search site CareerCast also published its list of 10 Best IT & Engineering Jobs 2016, which -- surprise! -- also noted data scientist as the top position of the year, with an annual median salary of $128,240, and a growth outlook rate of 16%.

The future of job interviews? (Source)

This is all great news.

However, other recent headlines such as "80% of IT Jobs can be Replaced by Automation, and it’s 'Exciting'" and "AI learns to write its own code by stealing from other programs" seem to be, decidedly, less great, especially for those of us in industries projected to be affected by artificial intelligence and its oncoming wave of automation (FYI - "IT" jobs are not the only ones in trouble).

Data science & engineering recruitment specialist -- and KDnuggets Top Blogger and author of a great series of articles on becoming a data scientist -- Alec Smith, offers this take on automation in the realm of data science:

Given this disruptive age we are living in, automation is something I have given a lot of thought to; not just in terms of how it might affect the data scientists that I place, but also the impact it could have on my profession as a whole. And while data science and recruitment are not comparable disciplines, I see a lot of parallels when it comes to how automation might affect the practitioners within both fields.

Although I think that recruitment is primed for a machine learning led evolution, it – like data science – is a multi-faceted process, and deeply rooted in a human system, thus making it a difficult problem to fully automate. Or to put it another way: just like data science is much more than model or feature selection, recruiting is much more than matching the right candidates to the right jobs. And this is the reason I see parallels, because while I have no doubt that both professions will evolve through automation, I don't subscribe to the notion that we’ll be rendered obsolete any time soon – especially for data scientists.

In other words, while there are aspects of data science which are open to automation, there is a human element which cannot easily be dispensed with. Continues Smith:

In this open, messy and human system in which data science occurs, full automation just isn’t feasible, and this ties directly into what all my clients seek when hiring data scientists: business problem definition/creative problem solving, and excellent communication/stakeholder management – things that are crucial for deploying data science in real-world environments.

We humans are still necessary for data science. And deducing from the words of Smith -- someone who has made a living recruiting humans to do data science work -- there is a pathway to safeguarding your job that, at least partially, emphasizes skills -- business understanding, communication, and creativity -- which are uniquely, well, human... at least, for the foreseeable future.

The World Economic Forum (WEC) reports that a sobering number of jobs are poised to be lost to automation, and rather quickly:

The World Economic Forum’s Future of Jobs study predicts that 5 million jobs will be lost before 2020 as artificial intelligence, robotics, nanotechnology and other socio-economic factors replace the need for human workers.

However, the WEC also stresses that the human aspect of the human data scientist will become increasingly important for job security:

David Deming, associate professor of education and economics at Harvard University, argues that soft skills like sharing and negotiating will be crucial. He says the modern workplace, where people move between different roles and projects, closely resembles pre-school classrooms, where we learn social skills such as empathy and cooperation.

The article notes that the so-called "soft skills," along with math skills, will be equally important moving forward. Skills such as sharing and negotiating will no longer be "warm and fuzzies," but mandatory competencies requiring nurturing in the Fourth Industrial Revolution. 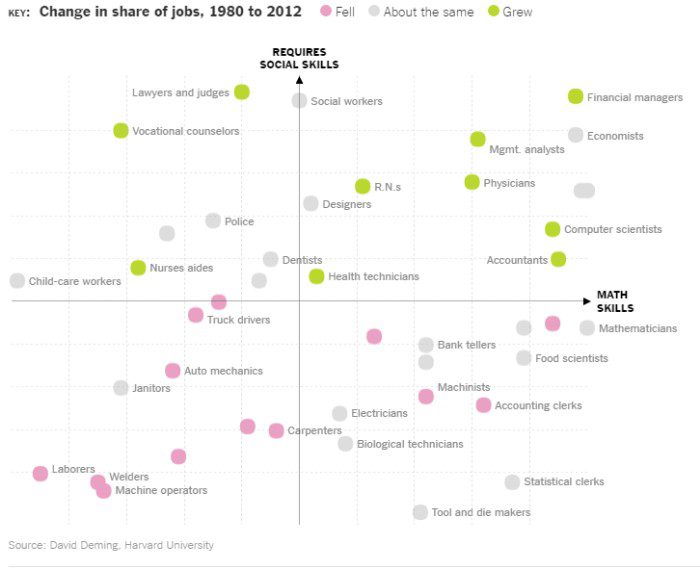 This brings us back to Smith's comments. Matching business understanding, creativity, and communication with the additional WEC-outlined soft skills is the formula for maximizing your job security as a data scientist moving forward; in fact, the prescription likely rings true for a whole host of related (and even unrelated) careers. 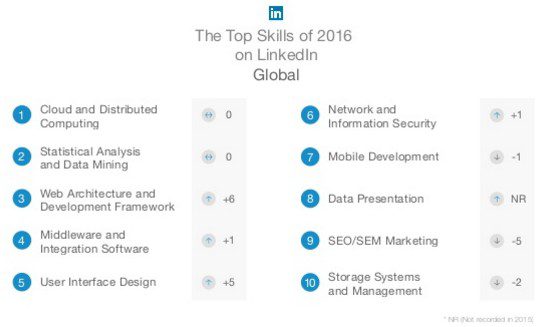 Don't worry; tech skills are still in demand, especially those which are data science-related. LinkedIn recently unveiled the technical-oriented Top Skills That Can Get You Hired In 2017, which placed "statistical analysis and data mining" at number 2, and "data presentation" at number 8 (WEC also singles out the broad, but important, math skills). Ensuring long-term success, however, goes beyond the tech, with soft skills once again taking a spot center stage.

The important message is this: remember that commercial data science requires much more than technical ability, so focus on developing a breadth of skills that will help you deploy data science into real-world environments. And if you do that, you’ll not only be employable today, but most likely you’ll be employable well into the future, even in the face of increasing automation.