New Poll: What software you used for Analytics, Data Mining, Data Science, Machine Learning projects in the past 12 months?

Vote in KDnuggets 18th Annual Poll: What software you used for Analytics, Data Mining, Data Science, Machine Learning projects in the past 12 months? We will clean, analyze, visualize, and publish the results.

What software you used for Analytics, Data Mining, Data Science, Machine Learning projects in the past 12 months?

We tried to include the most popular tools and platforms, while keeping the total number of choices under 100.

The tools are organized in 4 sections, with tools alphabetical in each section. 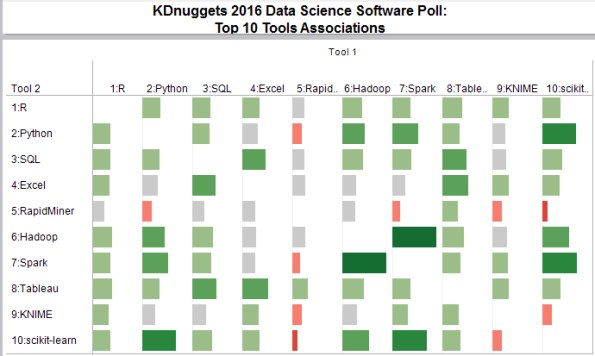 Combining these different types of tools in one poll is messy, but it allows interesting analysis afterwards, such as What Big Data, Data Science, Deep Learning software goes together?

This is the 18th such KDnuggets Poll, and several of the past polls suffered from excessive voting from some vendors. It is fine for vendors to ask their users to vote, but it is not OK to set up bot voting or direct link to vote for just one tool.
To reduce excessive and bot voting, this poll asks for an email verification.

Whatever other irregular voting we find, will be removed from final results, and we will publish the anonymized voter logs after the poll, so that anyone can analyze them.

We hope our analysis of this poll, trends, and results will useful, as they were in the past.