This article is about implementing Deep Learning (DL) using the H2O package in R. We start with a background on DL, followed by some features of H2O's DL framework, followed by an implementation using R. 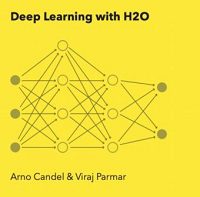 This article is about implementing Deep Learning using the H2O package in R.

H2O is an open-source Artificial Intelligence platform that allows us to use Machine Learning techniques such as Naïve Bayes, K-means, PCA, Deep Learning, Autoencoders using Deep Learning, among others. Using H2O, we can build predictive models using programming environments such as R, Python, Scala and a web-based UI called Flow.

I. Deep Learning: A Background

Deep Learning is a branch of Machine Learning algorithms that are inspired by the functioning of the human brain and the nervous system. The input data is clamped to the input layer of the deep network. The network then uses a hierarchy of hidden layers that successively produce compact, higher level abstractions (representations) of the input data. It thus produces pseudo-features of the input features. Neural networks with 3 layers or more are considered ‘Deep’.

At the output layer, the network error (cost) is calculated. This cost is successively minimized using a method called stochastic gradient descent and propagated backwards, back to the input layer, using an algorithm called backpropagation. This causes a re-calibration of the weights and biases in the network. Using the new weights, newer representations are propagated forward to the output layer and again checked for the network error. The process of forward and backward propagation continues until the weights have been adjusted to accurately predict the output. 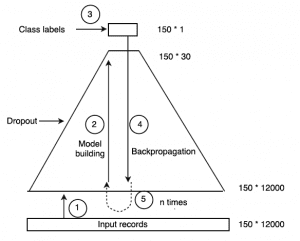 For Figure 1, let us consider an input dataset of 150 * 12000 dimensions (150 rows, 12000 columns). We create a Deep network with 4 hidden layers consisting of 4000, 750, 200, 30 neurons. All the 12000 data points in the input layer are used to construct the 4000 pseudo-features of the first hidden layer. As the size of the network here progressively decreases towards the final hidden layer, it forms a pyramid. The 5 steps shown in the figure have been explained below.

Step 2: The Deep Learning algorithm begins to learn inherent patterns in the dataset. It does so by associating a weight and bias to every feature formed from the input layer and hidden layers. This is the model-building stage. As it passes through each successive hidden layer, it forms narrower abstractions of the data. Each abstraction takes the abstraction of the previous layer as its input.

Dropout is a hyper-parameter specified during the model-building stage.

Step 3: After passing through the last hidden layer here, an abstraction of 150* 30 features is formed. The class labels (150* 1) are exposed to this abstraction. It has been a feedforward neural network so far.

Step 4: The class labels help the model associate an outcome to the patterns created for every input record. Accordingly, now the weights and biases can be tuned to better match the labels and minimize the cost (difference between the predicted output and actual output for the record).

Step 5: Backpropagation occurs n times, where n = number of epochs, or until there is no change in the weights.

Deep Learning in H2O is implemented natively as a Multi-Layer Perceptron (MLP). But, H2O also allows us to build autoencoders (an autoencoder is a neural net that takes a set of inputs, compresses and encodes them, and then tries to reconstruct the input as accurately as possible). Recurrent Neural Networks and Convolutional Neural Networks can be constructed using H2O’s Deep Water Project through third-party integrations of other Deep Learning libraries such as Caffe and TensorFlow.

The user has to specify the values of the hyper-parameters of the Deep Learning model. Parameters refer to the weights and biases of a deep learning model. Hyper-parameters are the options one needs to design a neural net, like number of layers, nodes per layer, activation, choice of regularizer, among others.﻿

Some of the features of H2O’s Deep Learning models are:

ADADELTA algorithm’(‘adaptive_rate’ hyper-parameter) for faster convergence and reduced oscillation around ravines, optional value of slower learning rate called ‘rate_annealing’ to slow down the learning rate as the model approaches a minima in the optimization landscape.

To avoid overfitting, H2O’s Deep Learning uses l1 and l2 regularization; and the concept of ‘dropouts’.

Checkpointing (using its key= ‘model_id’) is used to resume the training of the saved previous model with more data, changed values of hyper-parameters and so forth.

5) H2O also allows to perform Cross-validation on the training_frame and can also implement the GBM method (Gradient Boosting Machine).

I have used the UCI Machine Learning 'Pima Indians' dataset.