Interested in learning the concepts behind Logistic Regression (LogR)? Looking for a concise introduction to LogR? This article is for you. Includes a Python implementation and links to an R script as well.

A popular statistical technique to predict binomial outcomes (y = 0 or 1) is Logistic Regression. Logistic regression predicts categorical outcomes (binomial / multinomial values of y), whereas linear Regression is good for predicting continuous-valued outcomes (such as weight of a person in kg, the amount of rainfall in cm).

The predictions of Logistic Regression (henceforth, LogR in this article) are in the form of probabilities of an event occurring, ie the probability of y=1, given certain values of input variables x. Thus, the results of LogR range between 0-1.

LogR models the data points using the standard logistic function, which is an S- shaped curve given by the equation:

The equation to be solved in LogR is:

Estimating the values of B0,B1,..,Bk involves the concepts of probability, odds and log odds. Let us note their ranges first:

The example dataset here is sourced from the UCLA website.

The task is to predict which students graduated with honours or not (y = 1 or 0), for 200 students with fields female, read, write, math, hon, femalexmath . The fields describe the gender (female=1 if female), reading scores, writing scores, math scores, honours status (hon=1 if graduated with honours) and femalexmath showing the math score if female=1.

The crosstab of the variable hon with female shows that there are 109 males and 91 females; 32 of those 109 females secured honours.

This is interpreted as:

The Logit or log-odds of an event is the log of the odds. This refers to the natural log (base ‘e’). Thus,

It is the ratio of 2 odds; these 2 odds are obtained at 2 different values of x, the 2 values of x being 1 unit apart.

Such as: The odds obtained when x=0 and x=1 (ie when there is a 1 unit change in the value of x, where x=0 denotes male and x=1 denotes female).

Q: Find the odds ratio of graduating with honours for females and males. 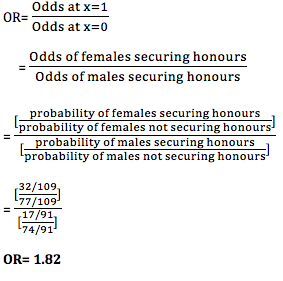 Suppose we want to calculate the effect of being female on the probability of graduating with honours. 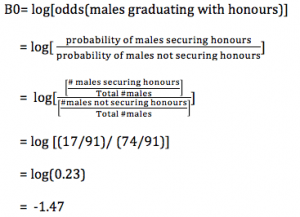 From the calculation in the section ‘odds ratio(OR)’,

where the value of female is substituted as 0 or 1 for male and female respectively.

Now, let us try to find out the probability of a female securing honours when there is only 1 input feature present-‘female’.

Thus, the probability of a female securing honours when there is only 1 input feature present-‘female’, is 0.29.

Q: Why not directly model probability, why is conversion to log-odds needed?

Thus, the odds is converted into log odds- to extend the range of the output.

This is akin to 2 people at the opposite ends of the same tax bracket- they are taxed different amounts but are subject to the same tax rate. Suppose there is a tax of 30% for the $40000-$80000 tax bracket- the man earning $40000 pays $12000 as tax, and the man earning $80000 pays $24000 as tax, but the tax rate was constant (30%) for both people. The value of x (independent variable- earnings) changed, hence the y value (dependent variable- tax paid) also changed. But when considering a man earning $75000, and if talking purely in terms of 'earnings', one would have to mention the max, mean, min values of 'earnings' in order to correctly picture the y-value for $75000. However, if talking purely in terms of the constant tax rate, one needs to consider only 1 number – the 30%, in order to predict his y-value correctly.

Thus, if one were to express the effect of change in the values of a variable x in terms of probability of an event, one would have to state 3 different probability values at the max, mean and min values of x- to derive the whole picture. But, log-odds is a single number that conveys the entire picture, as it remains constant inspite of change in x. Thus, for succinctness and to avoid the restricted range problem, log-odds is used to model the likelihood of an event; it is later converted into probability using the formula (e^ (Bt.X) )/(1+e^ (Bt.X) ).

The following LogR code in Python works on the Pima Indians Diabetes dataset. It predicts whether diabetes will occur or not in patients of Pima Indian heritage. The code is inspired from tutorials from this site.