What is Web Scraping and Why You Should Learn It?

Introducing Octoparse - a sleek, powerful and easy-to-use software that makes web scraping from any websites achievable for most people, including non-coders.

What is web scraping?

It is the process of extracting information and data from a website, transforming the information on a webpage into structured data for further analysis. Web scraping is also known as web harvesting or web data extraction. With the overwhelming data available on the internet, web scraping has become the essential approach to aggregating Big Data sets.

So, why should you learn web scraping and who is doing web scraping out there? We are going to address this question by looking into the different industries and jobs that require web scraping skills. To do this, we've compiled and analyzed the data extracted from job sites, including Indeed, Glassdoor and LinkedIn.

Followings are our findings to share with you. You might be just as surprised as I was. If you are interested in the scraping process, you may want to check our GitHub Repositories to download the crawler, running them on Octoparse FREE app to get the data.

The statistics below are based on the information collected from LinkedIn. The top 10 industries that have the highest demand for web scraping skills are: Computer Software (22%); Information Technology and Services (21%); Financial Services (12%); Internet (11%); Marketing and Advertising (5%); Computer & Network Security (3%); Insurance (2%); Banking (2%); Management Consulting (2%); Online Media(2%). 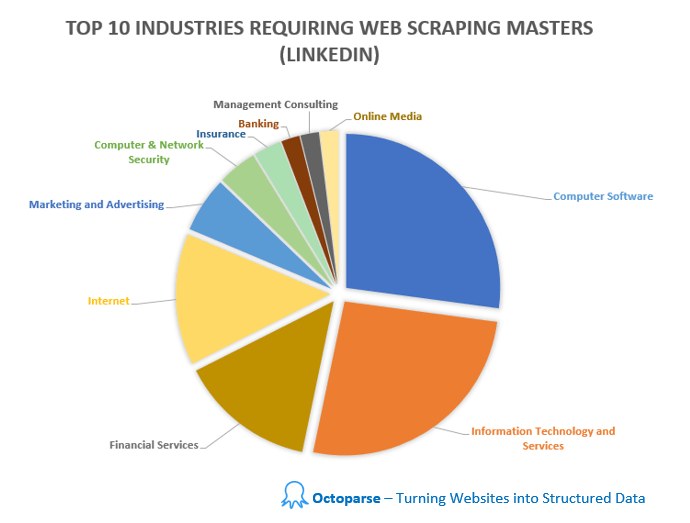 This is also based on the information on LinkedIn. There is no doubt that the most jobs requiring web scraping are tech-relevant ones, like Engineering, and Information Technology. There are, however, surprisingly many other kinds of works also require web scraping skills such as Human Resources, marketing, business development, research, sales and consulting. 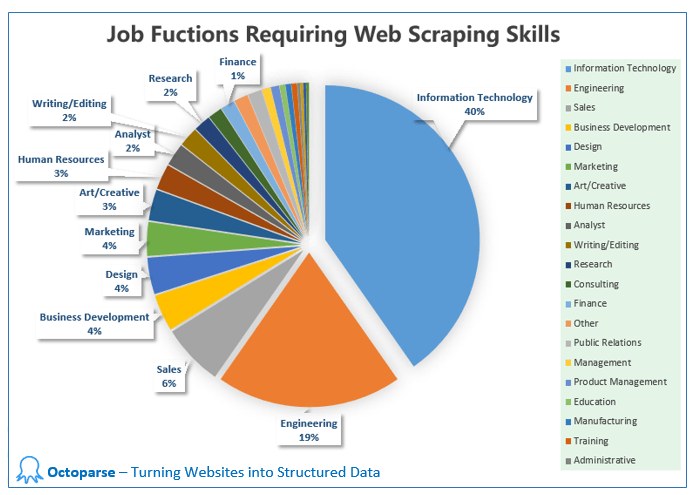 Based on the information aggregated from Glassdoor, there is a big difference in salaries for various jobs, from $25K to $203K. Among all the jobs, senior data engineer and data scientist are the best paying jobs. 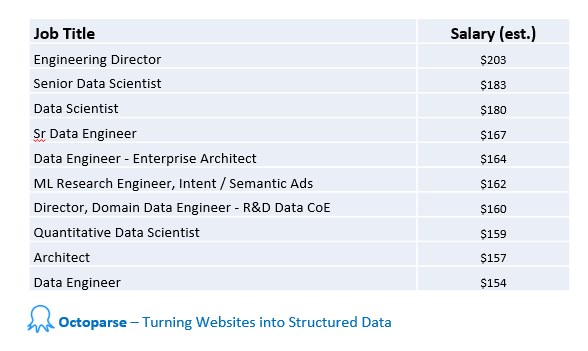 (Data based on Glassdoor's estimate of the base salary range for the job, which is not necessarily endorsed by the employer. ）

Among all the jobs information we collected, the least paying jobs are: Political Reporter and Junior Recruiter, which is starting from $25K and $29K.

We also explore on the average paying among different industries, based on the same dataset extracted from Glassdoor. 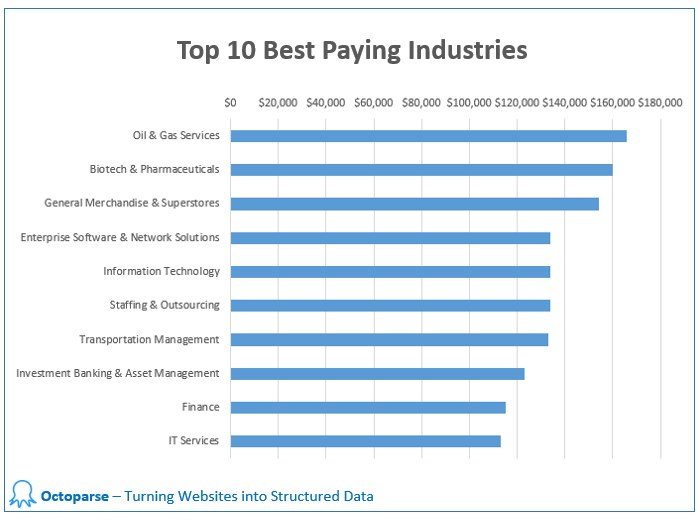 Before we jump into a conclusion of all the findings, we also extracted all the web scraping related job posts from the tech Giant – Google, since it’s pretty obvious that software and Information Technology Company are the biggest markets for web scraping experts. 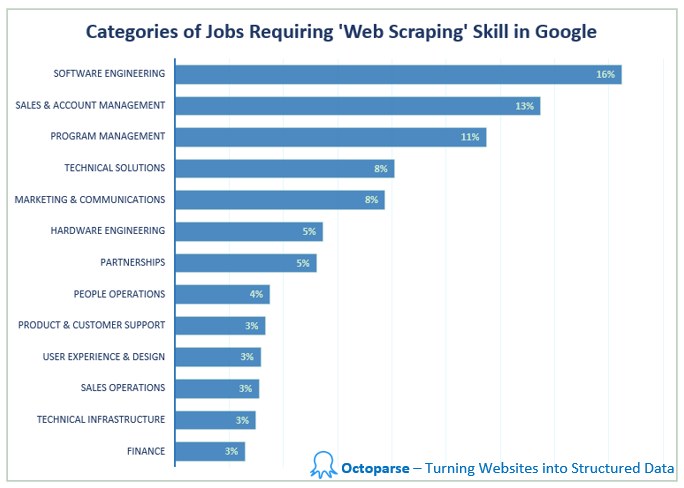 YouTube, a subsidiary of Google, is another example of a tech company of different size and service than Google while also requiring a high level of web scraping skills in different job categories.

It is safe to say that web scraping has become an essential skill to acquire in today’s digital world, not only for tech companies and not only for technical positions. On one side, compiling large datasets are fundamental to Big Data analytics, Machine Learning, and Artificial Intelligence; on the other side, with the explosion of digital information, Big Data is becoming much easier to access than ever.

With web scraping automation tool becoming "smarter" and popular,  even people with no programming background can easily apply web scraping for aggregating all sorts of data, empowering their business & work with the insights from Big Data.

If you wish to learn about web scraping but does not want to deal with Python or other programming languages, Octoparse| Free automatic web scraper, may be a good option for you to get started.

Octoparse has recently launched a brand new version 7.0, which has turned out to be the most revolutionary upgrade in the past two years. With not only a more user-friendly UI, but also some of the advanced features making web scraping even easier. The Octoparse Version 7 is a sleek, powerful and easy-to-use software that makes web scraping from any websites achievable for most people, including non-coders.