There are many techniques to detect and optionally remove outliers from a dataset. In this blog post, we show an implementation in KNIME Analytics Platform of four of the most frequently used - traditional and novel - techniques for outlier detection.

Anomalies, or outliers, can be a serious issue when training machine learning algorithms or applying statistical techniques. They are often the result of errors in measurements or exceptional system conditions and therefore do not describe the common functioning of the underlying system. Indeed, the best practice is to implement an outlier removal phase before proceeding with further analysis.

But hold on there! In some cases, outliers can give us information about localized anomalies in the whole system; so the detection of outliers is a valuable process because of the additional information they can provide about your dataset.

There are many techniques to detect and optionally remove outliers from a dataset. In this blog post, we show an implementation in KNIME Analytics Platform of four of the most frequently used - traditional and novel - techniques for outlier detection.

The Dataset and the Outlier Detection Problem

The dataset we used to test and compare the proposed outlier detection techniques is the well known airline dataset. The dataset includes information about US domestic flights between 2007 and 2012, such as departure time, arrival time, origin airport, destination airport, time on air, delay at departure, delay on arrival, flight number, vessel number, carrier, and more. Some of those columns could contain anomalies, i.e. outliers.

From the original dataset we extracted a random sample of 1500 flights departing from Chicago O’Hare airport (ORD) in 2007 and 2008.

In order to show how the selected outlier detection techniques work, we focused on finding outliers in terms of average arrival delays at airports, calculated on all flights landing at a given airport. We are looking for those airports that show unusual average arrival delay times.

This is the simplest, nonparametric outlier detection method in a one dimensional feature space. Here outliers are calculated by means of the IQR (InterQuartile Range).

The first and the third quartile (Q1, Q3) are calculated. An outlier is then a data point xi that lies outside the interquartile range. That is:

Using the interquartile multiplier value k=1.5, the range limits are the typical upper and lower whiskers of a box plot.

This technique was implemented using the Numeric Outliers node in a workflow built in  KNIME Analytics Platform (Figure 1).

Z-score is a parametric outlier detection method in a one or low dimensional feature space.

This technique assumes a Gaussian distribution of the data. The outliers are the data points that are in the tails of the distribution and therefore far from the mean. How far depends on a set threshold zthr for the normalized data points zi calculated with the formula:

where xi is a data point, μ is the mean of all xi and is the standard deviation of all xi.

An outlier is then a normalized data point which has an absolute value greater than zthr. That is:

This technique was implemented using the Row Filter node in a KNIME workflow (Figure 1).

This technique is based on the DBSCAN clustering method. DBSCAN is a non-parametric, density based outlier detection method in a one or multi dimensional feature space.

In the DBSCAN clustering technique, all data points are defined either as Core Points, Border Points or Noise Points.

Outlier detection thus depends on the required number of neighbors MinPts, the distance ℇ and the selected distance measure, like Euclidean or Manhattan.

This technique was implemented using the DBSCAN node in the KNIME workflow in Figure 1.

This is a non-parametric method for large datasets in a one or multi dimensional feature space.

An important concept in this method is the isolation number.

The threshold is defined based on the estimated percentage of outliers in the data, which is the starting point of this outlier detection algorithm.

An explanation with images of the isolation forest technique is available at https://quantdare.com/isolation-forest-algorithm/.

This technique was implemented in the KNIME workflow in Figure 1 by using a few lines of Python code within a Python Script node.

The Python Script node is part of the KNIME Python Integration, that allows you to write/import Python code into your KNIME workflow.

Implementation in a KNIME Workflow

KNIME Analytics Platform is an open source software for data science, covering all your data needs from data ingestion and data blending to data visualization, from machine learning algorithms to data wrangling, from reporting to deployment, and more. It is based on a Graphical User Interface for visual programming, which makes it very intuitive and easy to use, considerably reducing the learning time.

It has been designed to be open to different data formats, data types, data sources, data platforms, as well as external tools, like R and Python for example. It also includes a number of extensions for the analysis of unstructured data, like texts, images, or graphs.

Computing units in KNIME Analytics Platform are small colorful blocks, named “nodes”. Assembling nodes in a pipeline, one after the other, implements a data processing application. A pipeline is called “workflow”.

Given all those characteristics - open source, visual programming, and integration with other data science tools - we have selected it to implement the four techniques for outlier detection described in this post.

The final KNIME workflow implementing these four techniques for outlier detection is reported in Figure 1.The workflow: 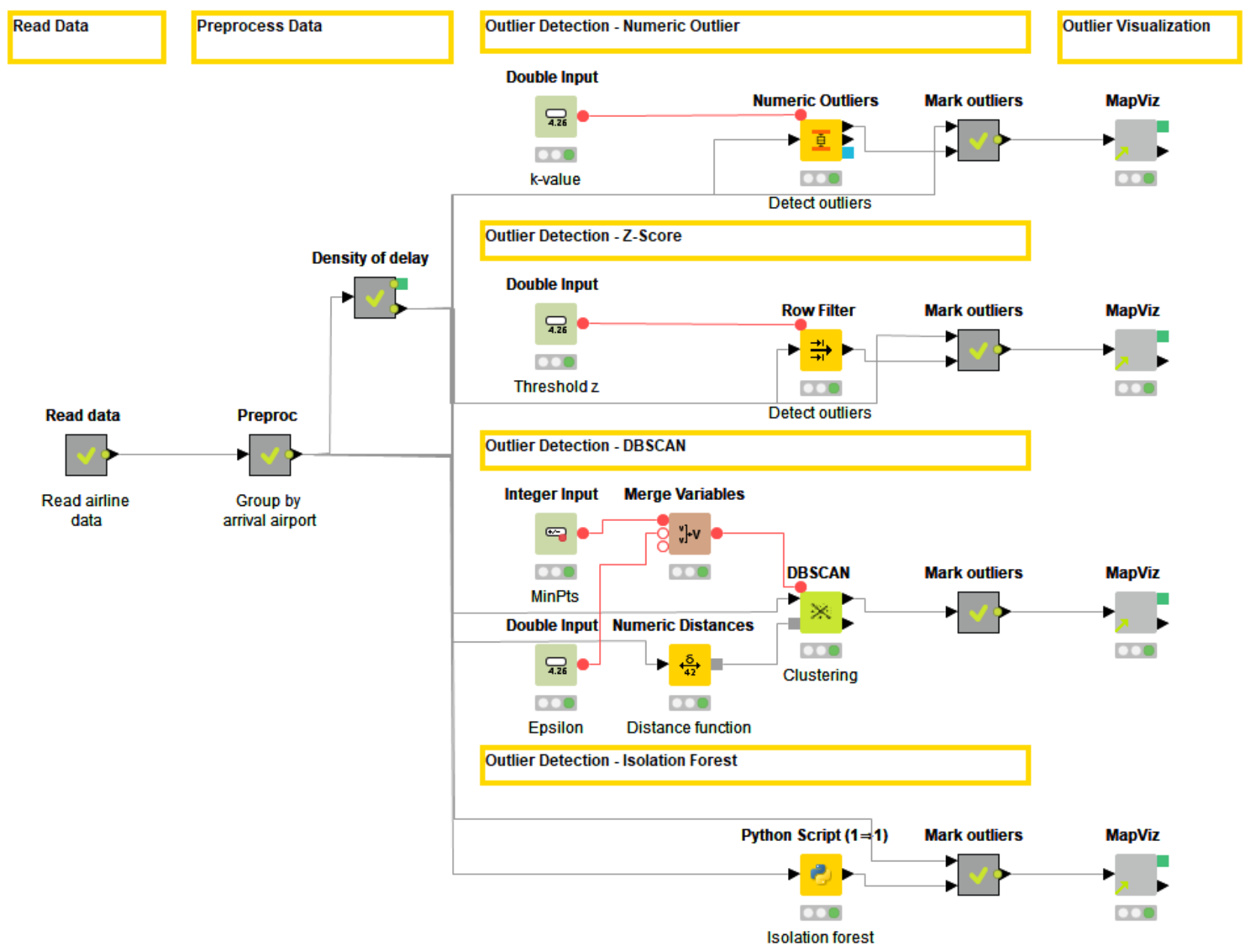 A few other airports however are identified by only some of the techniques. For example Louis Armstrong New Orleans International Airport (MSY) has been spotted by only the isolation forest and DBSCAN techniques. 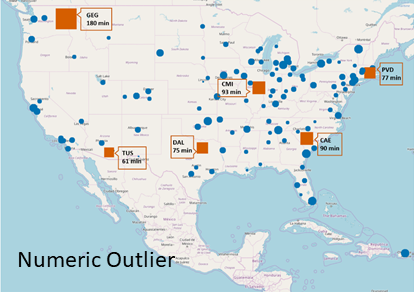 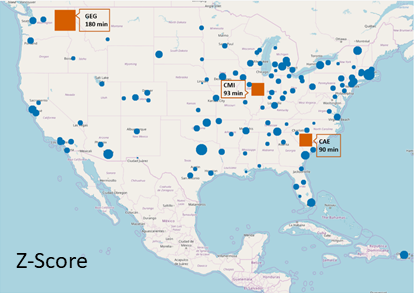 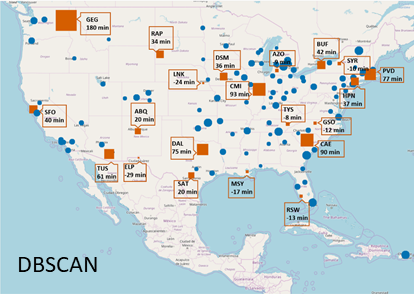 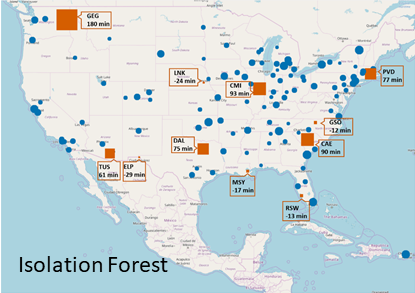 In this blog post, we have described and implemented four different outlier detection techniques in a one dimensional space: the average arrival delay for all US airports between 2007 and 2008 as described in the airline dataset.

There are three airports that all the outlier detection techniques identify as outliers. However, only some of the techniques (DBSCAN and Isolation Forest) could identify the outliers in the left tail of the distribution, i.e. those airports where, on average, flights arrived earlier than their scheduled arrival time.

The theoretical basis for this blog post was taken from: