Animations make even more sense when depicting time series data like stock prices over the years, climate change over the past decade, seasonalities and trends since we can then see how a particular parameter behaves with time.

Animations are an interesting way of demonstrating a phenomenon. We as humans are always enthralled by animated and interactive charts rather than the static ones. Animations make even more sense when depicting time series data like stock prices over the years, climate change over the past decade, seasonalities and trends since we can then see how a particular parameter behaves with time.

The above image is a simulation of Rain and has been achieved with Matplotlib library which is fondly known as the grandfather of python visualization packages. Matplotlib simulates raindrops on a surface by animating the scale and opacity of 50 scatter points. Today Python boasts of a large number of powerful visualisation tools like Plotly, Bokeh, Altair to name a few. These libraries are able to achieve state of the art animations and interactiveness. Nonetheless, the aim of this article is to highlight one aspect of this library which isn’t explored much and that is Animations and we are going to look at some of the ways of doing that.

Matplotlib is a Python 2D plotting library and also the most popular one. Most of the people start their Data Visualisation journey with Matplotlib. One can generate plots, histograms, power spectra, bar charts, error charts, scatterplots, etc easily with matplotlib. It also integrates seamlessly with libraries like Pandas and Seaborn to create even more sophisticated visualisations.
Some of the nice features of matplotlib are:

However, there are also areas where Matplotlib doesn’t shine out so much and lags behind its powerful counterparts.

As for a refresher here is a Matplotlib Cheat sheet from Datacamp which you can go through to brush up your basics. 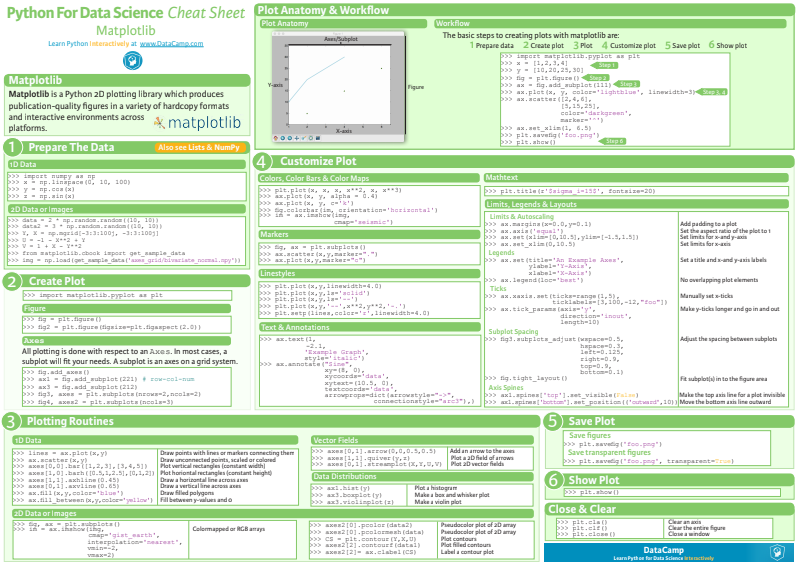 Matplotlib’s animation base class deals with the animation part. It provides a framework around which the animation functionality is built. There are two main interfaces to achieve that using:
FuncAnimation makes an animation by repeatedly calling a function func.

However, out of the two, FuncAnimation is the most convenient one to use. You can read more about them in the documentation since we will only concern ourselves with the FuncAnimation tool.

Once ready, we can begin with our first basic animation in the Jupyter Notebooks. The code for this article can be accessed from the associated Github Repository or you can view it on my binder by clicking the image below.

Let’s use FuncAnimation to create a basic animation of a sine wave moving across the screen. The source code for the animation has been taken from the Matplotlib Animation tutorial. Let’s first see the output and then we shall break down the code to understand what’s going under the hood.

This is the basic intuition behind creating animations in Matplotlib. With a little tweak in the code, interesting visualisations can be created. Let’s have a look at some of them

Similarly, there is a nice example of creating shapes at GeeksforGeeks. Let’s now create a moving coil which slowly unwinds, with the help of animation class of matplotlib. The code is quite similar to the sine wave plot with minor adjustments.

Live updating graphs come in handy when plotting dynamic quantities like stock data, sensor data or any other time-dependent data. We plot a base graph which automatically gets updated as more data is fed into the system. Let’s plot stock prices of a hypothetical company in a month.

Now, open the terminal and run the python file. You will get a graph like the one below which automatically updates as follows:

Here interval is 1000 milliseconds or one second.

Animation on a 3D plot

Creating 3D graphs is common but what if we can animate the angle of view of those graphs. The idea is to change the camera view and then use every resulting image to create an animation. There is a nice section dedicated to it at The Python Graph Gallery.

Create a folder called volcano in the same directory as the notebook. All the images will be stored in this folder which will be then used in the animation.

Celluloid is a Python module that simplifies the process of creating animations in matplotlib. This library creates a matplotlib figure and creates a Camera from it. It then reuses figure and after each frame is created, take a snapshot with the camera. Finally, an animation is created with all the captured frames.

Here are a few examples using the Celluloid module.

Animations help to highlight certain features of the visualisation which otherwise cannot be communicated easily with static charts. Having said that it is also important to keep in mind that unnecessary and overuse of visualisations can sometimes complicate things. Every feature in data visualisation should be used judiciously to have the best impact.