Machine learning encompasses a vast set of conceptual approaches. We classify the three main algorithmic methods based on mathematical foundations to guide your exploration for developing models.

In September 2018, I published a blog about my forthcoming book on The Mathematical Foundations of Data Science.  The central question we address is: How can we bridge the gap between mathematics needed for Artificial Intelligence (Deep Learning and Machine learning) with that taught in high schools (up to ages 17/18)?

In this post, we present a chapter from this book called “A Taxonomy of Machine Learning Models.” The book is now available for an early bird discount released as chapters. If you are interested in getting early discounted copies, please contact ajit.jaokar at feynlabs.ai.

1. A Taxonomy of Machine Learning Models

There is no simple way to classify machine learning algorithms. In this section, we present a taxonomy of machine learning models adapted from the book Machine Learning by Peter Flach. While the structure for classifying algorithms is based on the book, the explanation presented below is created by us.

For a given problem, the collection of all possible outcomes represents the sample space or instance space.

The basic idea for creating a taxonomy of algorithms is that we divide the instance space by using one of three ways:

The outcome of the transformation of the instance space by a machine learning algorithm using the above techniques should be exhaustive (cover all possible outcomes) and mutually exclusive (non-overlapping).

There are mainly two kinds of logical models: Tree models and Rule models.

Rule models consist of a collection of implications or IF-THEN rules. For tree-based models, the ‘if-part’ deﬁnes a segment and the ‘then-part’ deﬁnes the behaviour of the model for this segment. Rule models follow the same reasoning.

Tree models can be seen as a particular type of rule model where the if-parts of the rules are organised in a tree structure. Both Tree models and Rule models use the same approach to supervised learning.  The approach can be summarised in two strategies: we could first find the body of the rule (the concept) that covers a sufficiently homogeneous set of examples and then find a label to represent the body. Alternately, we could approach it from the other direction, i.e., first select a class we want to learn and then find rules that cover examples of the class.

A simple tree-based model is shown below. The tree shows survival numbers of passengers on the Titanic ("sibsp" is the number of spouses or siblings aboard). The values under the leaves show the probability of survival and the percentage of observations in the leaf. The model can be summarised as: Your chances of survival were good if you were (i) a female or (ii) a male younger than 9.5 years with less than 2.5 siblings. 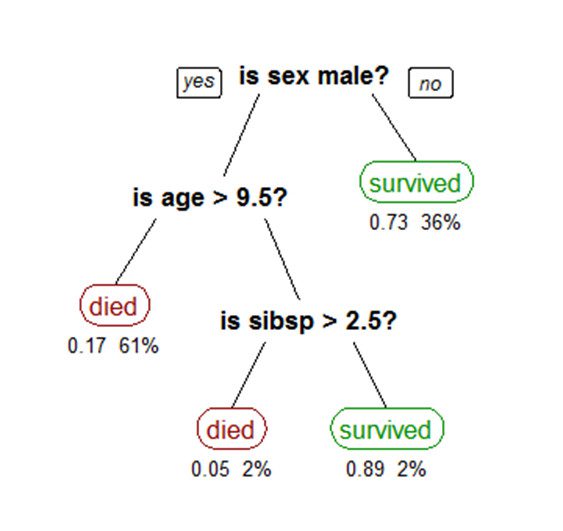 The following example explains this idea in more detail.

A Concept Learning Task called “Enjoy Sport” as shown above is defined by a set of data from some example days. Each data is described by six attributes. The task is to learn to predict the value of Enjoy Sport for an arbitrary day based on the values of its attribute values. The problem can be represented by a series of hypotheses. Each hypothesis is described by a conjunction of constraints on the attributes. The training data represents a set of positive and negative examples of the target function. In the example above, each hypothesis is a vector of six constraints, specifying the values of the six attributes –  Sky, AirTemp, Humidity, Wind, Water, and Forecast. The training phase involves learning the set of days (as a conjunction of attributes) for which Enjoy Sport = yes.

Thus, the problem can be formulated as:

Try to identify a function that can predict the target variable Enjoy Sport as yes/no, i.e., 1 or 0.

2.3 Concept learning as a search problem and as Inductive Learning

To summarise, in this section, we saw the first class of algorithms where we divided the instance space based on a logical expression. We also discussed how logical models are based on the theory of concept learning – which in turn – can be formulated as an inductive learning or a search problem.

In the previous section, we have seen that with logical models, such as decision trees, a logical expression is used to partition the instance space. Two instances are similar when they end up in the same logical segment. In this section, we consider models that define similarity by considering the geometry of the instance space.  In Geometric models, features could be described as points in two dimensions (x- and y-axis) or a three-dimensional space (x, y, and z). Even when features are not intrinsically geometric, they could be modelled in a geometric manner (for example, temperature as a function of time can be modelled in two axes). In geometric models, there are two ways we could impose similarity. 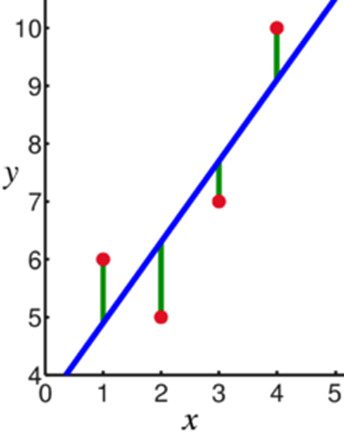 Linear models are parametric, which means that they have a ﬁxed form with a small number of numeric parameters that need to be learned from data. For example, in f (x) = mx + c, m and c are the parameters that we are trying to learn from the data. This technique is different from tree or rule models, where the structure of the model (e.g., which features to use in the tree, and where) is not ﬁxed in advance.

In this section, we could also use algorithms that include kernel methods, such as support vector machine (SVM). Kernel methods use the kernel function to transform data into another dimension where easier separation can be achieved for the data, such as using a hyperplane for SVM.

Distance is applied through the concept of neighbours and exemplars. Neighbours are points in proximity with respect to the distance measure expressed through exemplars. Exemplars are either centroids that ﬁnd a centre of mass according to a chosen distance metric or medoids that ﬁnd the most centrally located data point. The most commonly used centroid is the arithmetic mean, which minimises squared Euclidean distance to all other points.

Examples of distance-based models include the nearest-neighbour models, which use the training data as exemplars – for example, in classification. The K-means clustering algorithm also uses exemplars to create clusters of similar data points.

The third family of machine learning algorithms is the probabilistic models. We have seen before that the k-nearest neighbour algorithm uses the idea of distance (e.g., Euclidian distance) to classify entities, and logical models use a logical expression to partition the instance space. In this section, we see how the probabilistic models use the idea of probability to classify new entities.

Naïve Bayes is an example of a probabilistic classifier.

The goal of any probabilistic classifier is given a set of features (x_0 through x_n) and a set of classes (c_0 through c_k), we aim to determine the probability of the features occurring in each class, and to return the most likely class. Therefore, for each class, we need to calculate P(c_i | x_0, …, x_n).

We can do this using the Bayes rule defined as

The above discussion presents a way to classify algorithms based on their mathematical foundations. While the discussion is simplified, it provides a comprehensive way to explore algorithms from first principles. If you are interested in getting early discounted copies, please contact ajit.jaokar at feynlabs.ai.