Emoji is becoming a global language understandable by anyone who expresses... emotion. With the pervasiveness of these little Unicode blocks, we can perform analytics on their use throughout social media to gain insight into sentiments around the world.

Emoji are more than a millennial messaging fad. Emoji are ideograms and smileys used in electronic messages and web pages. Created in 1998 by Shigetaka Kurita, a Japanese artist working for phone company NTT Docomo, emoji became increasingly popular worldwide in the 2010s after being added to several mobile operating systems.

Since emoji characters began displaying on Twitter in April 2014, they’ve become a practical and fun way to convey extra meaning and emotion in the space of 140 characters (280 starting from September 2017).

the Face with Tears of Joy, named the Oxford Dictionaries 2015 Word of the Year.

The combination of emoji 🗑️ 🔥 (Dumpster Fire), defined as an exceedingly disastrous or chaotic situation, was the 2016 American Dialect Society word of the year.

Integrating emoji in their communications strategy brands have new opportunity to connect with consumers and tell stories in a fun, informal, and creative way. Also analyzing the most used emojis when mentioning your name on social media could open new perspectives on how markets are feeling about a new product, a new campaign, or about the brand itself.

From sentiment to emotions

While sentiment analysis focuses on discovering text patterns to classify an incoming message and tells whether the underlying sentiment is positive, negative or neutral; emoji are closely related to emotions. Using pre-built lists it is possible to group emojis by emotion (joy, disgust, sadness, anger, fear, and surprise) and scale understanding of your audience communications or on a particular theme. Here follow an emotions analysis based on a sample of 50,000 tweets collected worldwide from 25 to 31 July 2019 containing the hashtag #brexit. 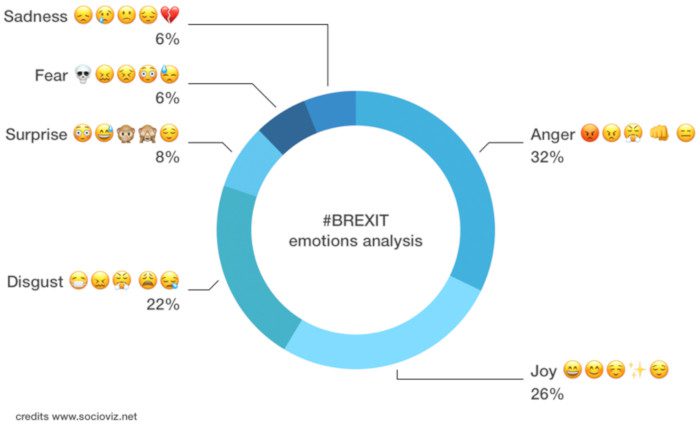 Social network analysis (SNA) is a form of analytics that is specifically focused on identifying and forecasting connections, relationships, and influence among individuals and groups. SNA is also useful in mapping and visualizing social media conversations with a graph of relations between actors or between contents. Emoji Network Analysis is a new perspective in emoji analytics that focuses on analysis of co-presence and cluster detection of emoji in online communication.

In the example below each emoji is represented with a circle (a node) and is connected to another emoji when there is a co-presence in the same tweet; different colors represent a different cluster of arguments that frequently goes together. 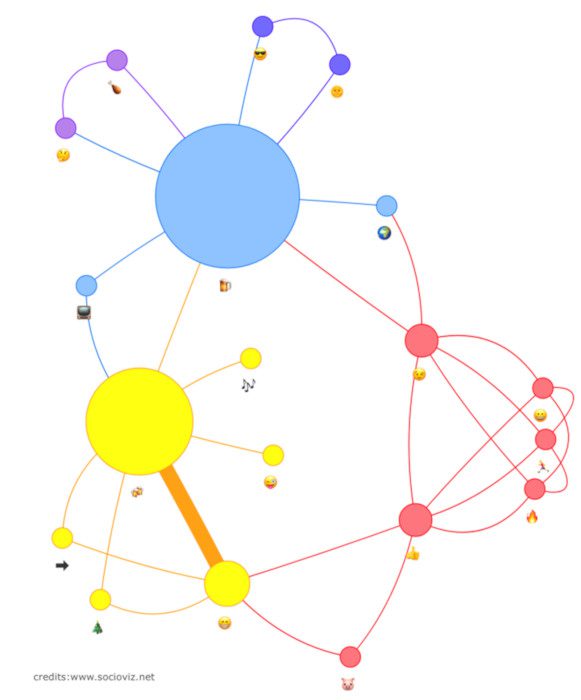 Emoji is an international language and are everywhere, they’re on t-shirts, mugs, and even having their own movie. The analysis of emoji on social media helps companies to understand their consumers' emotions and how their markets their brand, their products, and competitors.

Bio: Alessandro Zonin is a sociologist, working as a Social Media Strategy Leader, passionate about Social Network Analysis and interested in its practical applications as the identification of key roles within social media and organizational networks. Alessandro is also a Verified Gephi trainer and TEDx speaker.