A European Approach to Master’s Degrees in Data Science

Data science education in Europe has been reevaluated and new recommendations are leading the way to the next generation of data science Master's courses to better support and train students.

The Da.Re. project (Data Science Pathways to Re-image Education) was an Erasmus+ project, funded by European Commission, in which a team of 11 partners (made by universities, companies, and an association) from Italy, Portugal, the United Kingdom, Slovenia, and Serbia, collaborated to identify the requirements of education in data science to support Europe's growing social and economic needs in the public and private sectors. The project, carried out from 2016 to 2019, had as its main objective to define new types of Masters courses that can be presented throughout Europe, starting from concrete local needs of its member states.

The first year of the project was focused on researching the provision and requirement of data science education in Europe, especially in the partners’ countries (Intellectual Output 1). The research shows that, globally, Europe has been slow to respond to the opportunities offered by data science except for the UK, which shows behaviour closer to that of the United States. Italy, Slovenia, Serbia, and Portugal are behind both in the formation and in the demand by companies for data scientists. This could depend on the fact that in all the countries studied, except the UK, data science education was available only in a few universities, and they have a similar industrial substrate composed by small and medium companies.

We imagined how to address this gap and to train at best a person that could help those companies to do data science without committing them financially to create data scientist divisions within them. We introduced what we called a bridge person – someone not very experienced in data science but quite knowledgeable to provide a bridge between the company business, focused on the commercial aspects and technical experts who can help achieve the business goals, by applying sophisticated data science techniques. Our research shows that all educational data science pathways must eventually lead through hands-on problem solving by teams of students with complementary skills. The introduction and definition of the bridge person can be considered as one pathway to education.

The Da.Re. way to Become a Data Scientist

The second year of the project was dedicated to the implementation of another pathway for education: an experimental course made up of 80 hours of online education with 70 hours of residential activity. The online part was in all respects a MOOC while the residential part was designed with a period of teamwork on concrete problems in which the students were to apply the theoretical knowledge acquired during the MOOC.

The latter was divided into four modules, see Figure 1:

Moreover, during the residential school, domain experts introduced 4 case studies, with real data. The students, divided in team, were required to apply their knowledge in order to solve them in creative ways. The course was designed to be at a master’s level (European Level 7) and aimed to students with bachelor’s degrees in different (scientific) subjects that would enable them to pursue a career in data science. The student feedback collected by questionnaires at the end of the residential part was very positive and encouraging. The report (Intellectual Output 2) of the second year, freely available, contains all the material from the Da.Re course.

The Da.Re. recommendations on a European Master Degree in Data Science 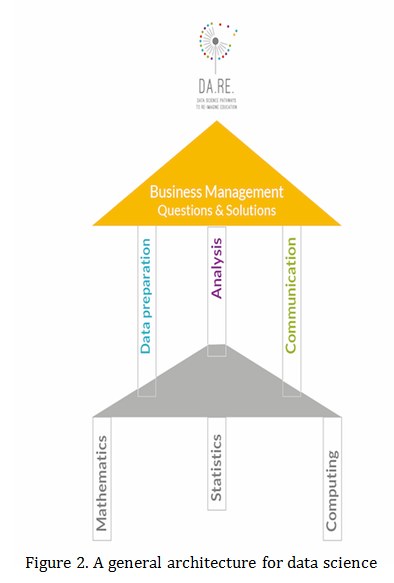 The course delivered during the second year and its feedback were the starting point for a serious  reflection about the establishment of a European Master’s degree Curriculum in Data Science.

The Bologna Process put the basis for the European Higher Education Area with a harmonization among the different countries, in terms of education, but some differences still remain and make the process of establishing the same curricula across Europe challenging.

For this reason, the recommendations of the Da.Re. Consortium are very general. Importantly, they are learning outcomes-based. Since data science is growing faster and faster and each topic could explode requiring new competencies. A learning outcome curriculum format can adapt to include new specific competencies in order to increase and complete the educational offer. The recommendations are collected in the last report of the project (Intellectual Output 3).

The main recommendation is that, at the European level, the specification for a Master’s course should be in terms the practical things that students can do where this often requires a synthesis of the knowledge gained on academic courses in the context of real-world problems.

As shown in Figure 2, Data Science has to be built on strong theoretical foundations in mathematics, statistics, and computation. These support the practical activities of data preparation, analysis, and communication of results. In turn, this supports business and management problems and questions and provides evidence-based answers and solutions. Thus, the Da.Re. approach to data science education focuses on what students can do in practical problem-driven contexts.

Those results will be used by the partners for launching new data science Master’s courses in Italy, Portugal, Slovenia, and the UK by developing and sharing resources including creating an international virtual problem-solving workshop to train teams of young people to apply their academic knowledge to real-world problems.

Bio: Marco Piangerelli is a Post-Doc and contract Professor at the University of Camerino where he deals with machine learning and topological data analysis. He is involved in several European and Regional Projects, and is a member of the Da.Re consortium. Jeff Johnson is Professor of Complexity Science and Design at the UK Open University, CEO of Vision Scientific Ltd, and Vice-President of the UNESCO UniTwin Complex Systems Digital Campus. He is a member of the Da.Re consortium.