An open source low-code machine learning library in Python. PyCaret is an alternate low-code library that can be used to replace hundreds of lines of code with few words only. This makes experiments exponentially fast and efficient. 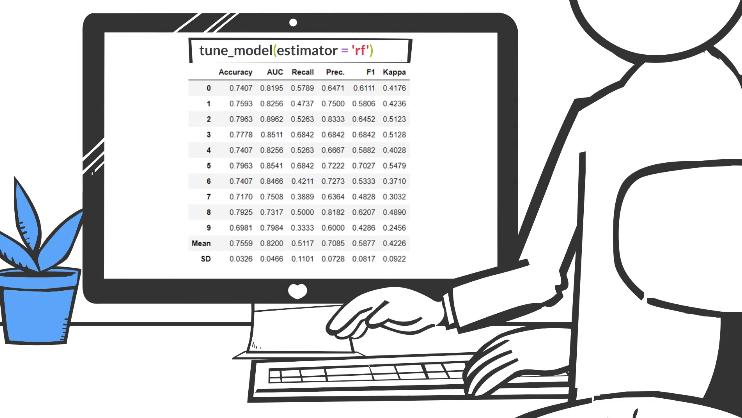 In comparison with the other open source machine learning libraries, PyCaret is an alternate low-code library that can be used to replace hundreds of lines of code with few words only. This makes experiments exponentially fast and efficient. PyCaret is essentially a Python wrapper around several machine learning libraries and frameworks such as scikit-learn, XGBoost, Microsoft LightGBM, spaCy, and many more.

PyCaret is simple and easy to use. All the operations performed in PyCaret are sequentially stored in a Pipeline that is fully orchestrated for deployment. Whether its imputing missing values, transforming categorical data, feature engineering or even hyperparameter tuning, PyCaret automates all of it. To learn more about PyCaret, watch this 1-minute video.

Getting Started with PyCaret

The first stable release of PyCaret version 1.0.0 can be installed using pip. Using the command line interface or notebook environment, run the below cell of code to install PyCaret.

If you are using Azure notebooks or Google Colab, run the below cell of code to install PyCaret.

When you install PyCaret, all dependencies are installed automatically. Click here to see the list of complete dependencies.

It cannot get easier than this 👇

In this step-by-step tutorial, we will use ‘diabetes’ dataset and the goal is to predict patient outcome (binary 1 or 0) based on several factors such as Blood Pressure, Insulin Level, Age etc. The dataset is available on PyCaret’s github repository. Easiest way to import dataset directly from repository is by using get_data function from pycaret.datasets modules.

The first step of any machine learning experiment in PyCaret is setting up the environment by importing the required module and initializing setup( ). The module used in this example is pycaret.classification.

Once the module is imported, setup() is initialized by defining the dataframe (‘diabetes’) and the target variable (‘Class variable’). 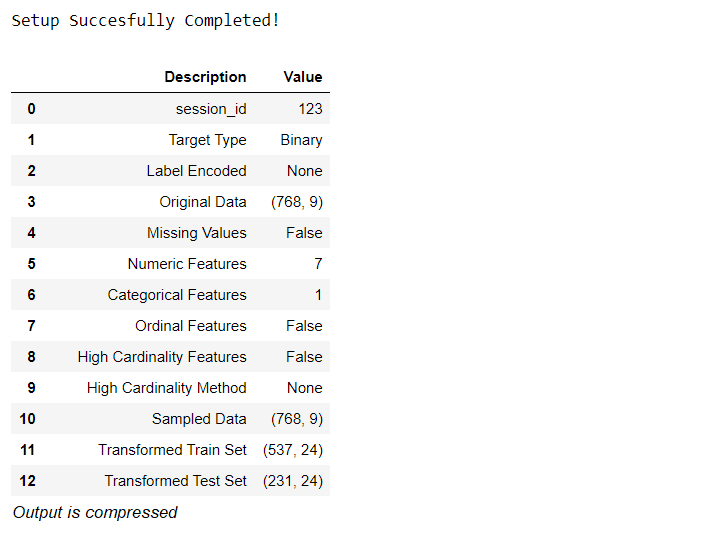 All the preprocessing steps are applied within setup(). With over 20 features to prepare data for machine learning, PyCaret creates a transformation pipeline based on the parameters defined in setup function. It automatically orchestrates all dependencies in a pipeline so that you don’t have to manually manage the sequential execution of transformations on test or unseen dataset. PyCaret’s pipeline can easily be transferred across environments to run at scale or be deployed in production with ease. Below are preprocessing features available in PyCaret as of its first release. 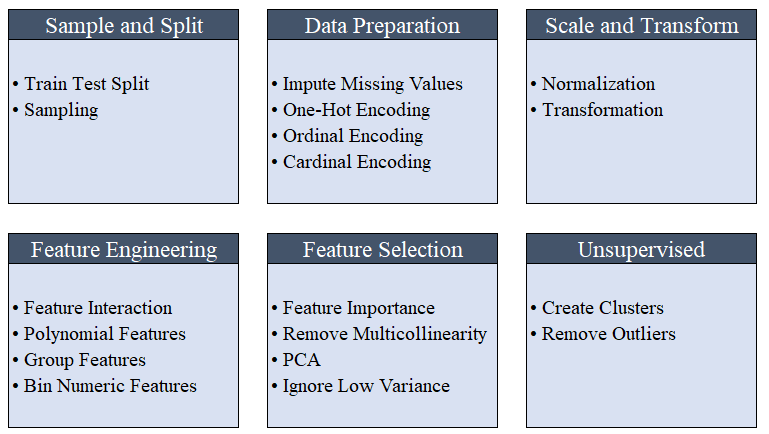 💡 Data Preprocessing steps that are compulsory for machine learning such as missing values imputation, categorical variable encoding, label encoding (converting yes or no into 1 or 0), and train-test-split are automatically performed when setup() is initialized. Click here to learn more about PyCaret’s preprocessing abilities.

This is the first step recommended in supervised machine learning experiments (classification or regression). This function trains all the models in the model library and compares the common evaluation metrics using k-fold cross validation (by default 10 folds). The evaluation metrics used are: 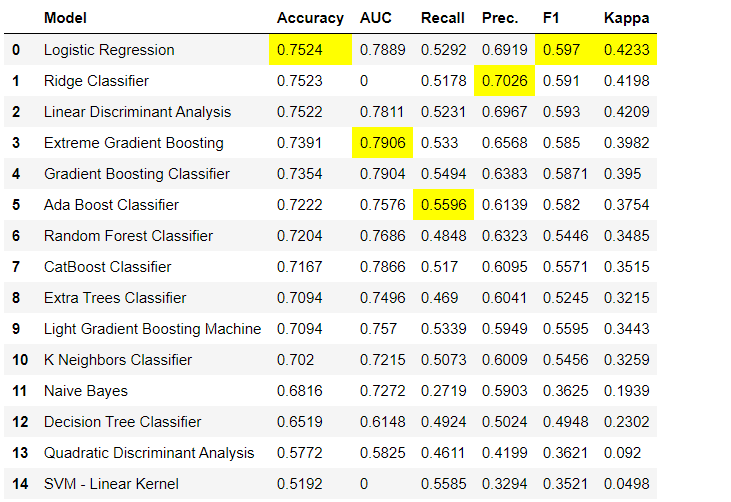 💡 Metrics are evaluated using 10-fold cross validation by default. It can be changed by changing the value of fold parameter.

💡 Table is sorted by ‘Accuracy’ (Highest to Lowest) value by default. It can be changed by changing the value of sort parameter.

Creating a model in any module of PyCaret is as simple as writing create_model. It takes only one parameter i.e. the model name passed as string input. This function returns a table with k-fold cross validated scores and a trained model object. 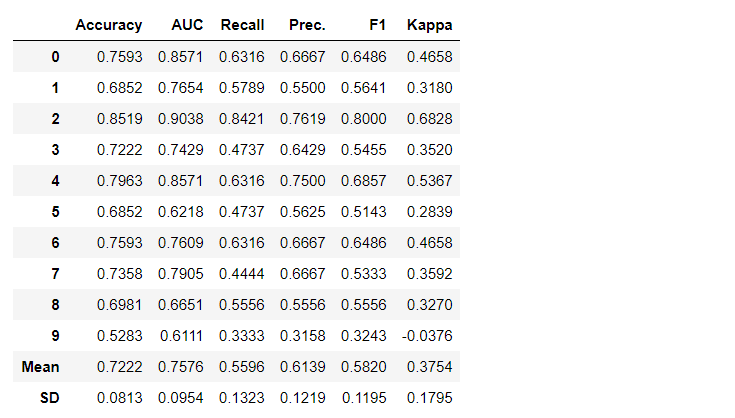 Variable ‘adaboost’ stores a trained model object returned by create_model function is a scikit-learn estimator. Original attributes of a trained object can be accessed by using period ( . ) after variable. See example below.

💡 PyCaret has over 60 open source ready-to-use algorithms. Click here to see a complete list of estimators / models available in PyCaret.

The tune_model function is used for automatically tuning hyperparameters of a machine learning model. PyCaret uses random grid search over a predefined search space. This function returns a table with k-fold cross validated scores and a trained model object.

💡 The tune_model function in unsupervised modules such as pycaret.nlp, pycaret.clustering and pycaret.anomaly can be used in conjunction with supervised modules. For example, PyCaret’s NLP module can be used to tune number of topics parameter by evaluating an objective / cost function from a supervised ML model such as ‘Accuracy’ or ‘R2’.

💡 ‘Bagging’ method is used for ensembling by default which can be changed to ‘Boosting’ by using the method parameter within the ensemble_model function. 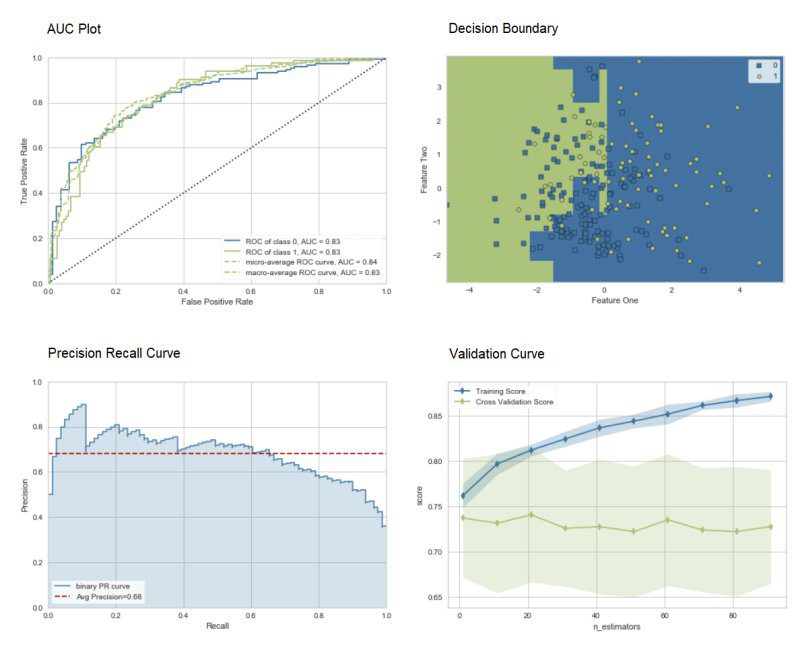 Click here to learn more about different visualization in PyCaret.

Alternatively, you can use evaluate_model function to see plots via user interface within notebook.

💡 plot_model function in pycaret.nlp module can be used to visualize text corpus and semantic topic models. Click here to learn more about it.

When the relationship in data is non-linear which is often the case in real life we invariably see tree-based models doing much better than simple gaussian models. However, this comes at the cost of losing interpretability as tree-based models do not provide simple coefficients like linear models. PyCaret implements SHAP (SHapley Additive exPlanations using interpret_model function. 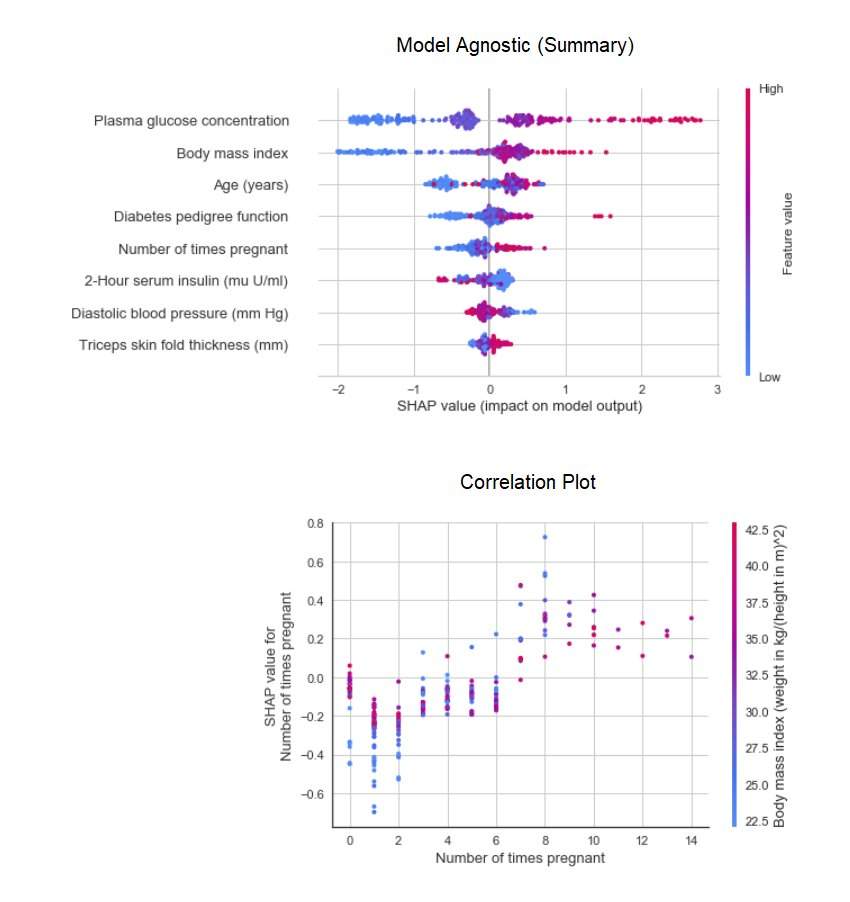 Interpretation of a particular datapoint (also known as reason argument) in the test dataset can be evaluated using ‘reason’ plot. In the below example we are checking the first instance in our test dataset.

So far the results we have seen are based on k-fold cross validation on training dataset only (70% by default). In order to see the predictions and performance of the model on the test / hold-out dataset, the predict_model function is used. 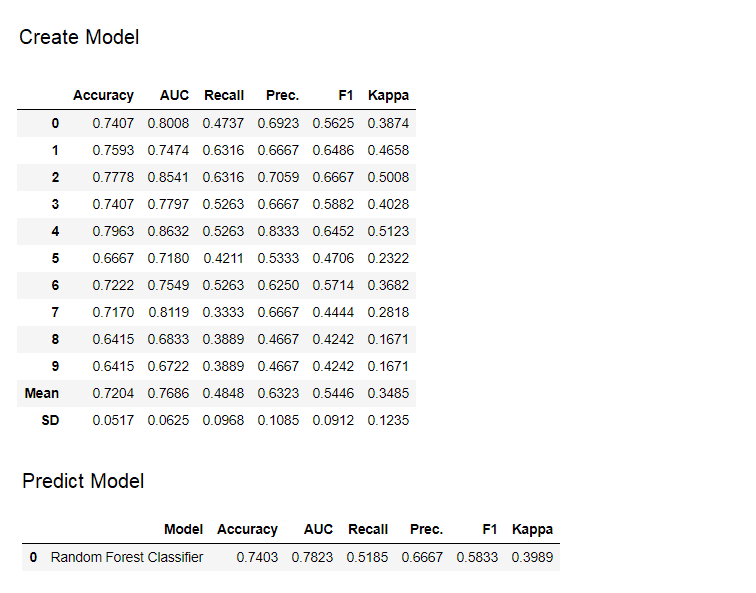 💡 predict_model function can also predict a sequential chain of models which are created using stack_models and create_stacknet function.

11. Save Model / Save Experiment

Once training is completed the entire pipeline containing all preprocessing transformations and trained model object can be saved as a binary pickle file.

You can also save the entire experiment consisting of all intermediary outputs as one binary file.

💡 You can load saved model and saved experiment using load_model and load_experiment function available in all modules of PyCaret.

In the next tutorial, we will show how to consume a trained machine learning model in Power BI to generate batch predictions in a real production environment.

Please also see our beginner level notebooks for these modules:

What’s in the development pipeline?

We are actively working on improving PyCaret. Our future development pipeline includes a new Time Series Forecasting module, Integration with TensorFlow and major improvements on scalability of PyCaret. If you would like to share your feedback and help us improve further, you may fill this form on website or leave a comment on our GitHub or LinkedIn page.

Want to learn about a specific module?

As of the first release 1.0.0, PyCaret has the following modules available for use. Click on the links below to see the documentation and working examples.

Give us ⭐️ on our github repo if you like PyCaret.

Bio: Moez Ali is a Data Scientist, and is Founder & Author of PyCaret.