It has been some time since we last performed a Python libraries roundup, and as such we have taken the opportunity to start the month of November with just such a fresh list.

How We Built This List of 38 Python Libraries for Data Science:

This time, however, we have split the collected on open source Python data science libraries in two. This first post (this) covers "data science, data visualization & machine learning," and can be thought of as "traditional" data science tools covering common tasks. The second post, to be published next week, will cover libraries for use in building neural networks, and those for performing natural language processing and computer vision tasks.

Again, this separation and classification is arbitrary, in some instances more than others, but we have done our best to group tools together by intended use case, hoping this is most useful for readers.

We Organized Python Libraries for Data Science Into 6 Categories:

The categories included in this post, which we see as taking into account common data science libraries — those likely to be used by practitioners in the data science space for generalized, non-neural network, non-research work — are:

Our list is made up of libraries that our team decided together by consensus was representative of common and well-used Python data science libraries. Also, to be included a library must have a Github repository. The categories are in no particular order, and neither are the libraries included within each. We contemplated constructing an ordering arbitrarily by stars or some other metric, but decided against it in order not explicitly stray from placing any perceived value or importance of the libraries within. Their listing here, then, is purely random. Library descriptions are directly from the Github repositories, in some form or another.

Thanks to Ahmed Anis for contributing to the collection of this data, and to the rest of the KDnuggets staff for their inputs, insights, and suggestions.

Note that visualization below, by Gregory Piatetsky, represents each library by type, plots it by stars and contributors, and its symbol size is reflective of the relative number of commits the library has on Github. 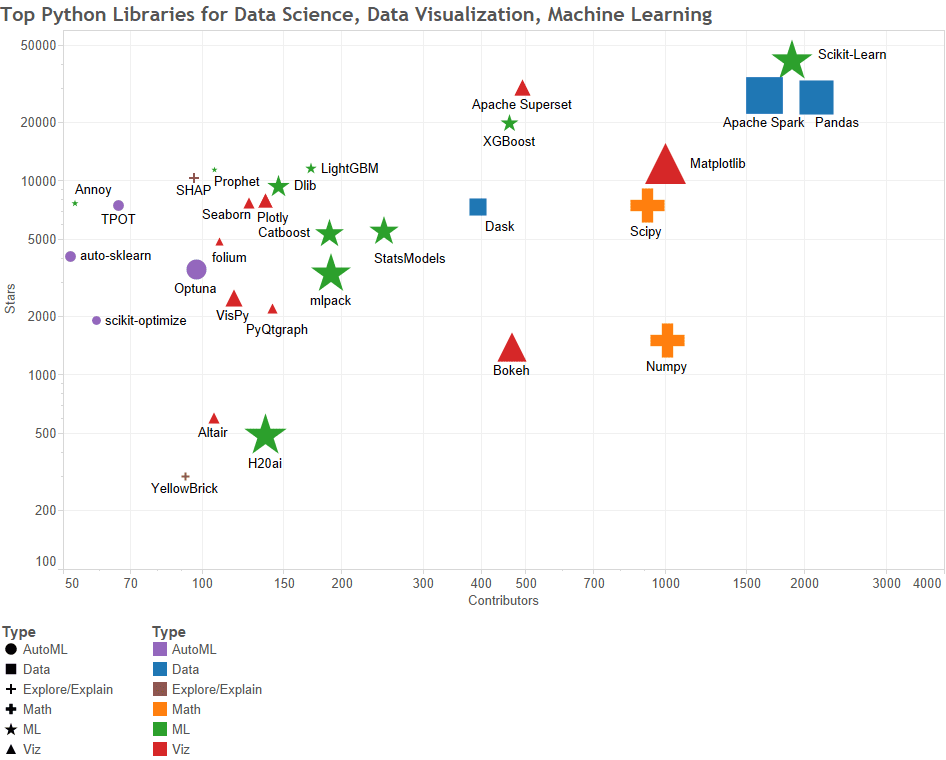 And, so without further ado, here are the 38 top Python libraries for data science, data visualization & machine learning, as best determined by KDnuggets staff.

Pandas is a Python package that provides fast, flexible, and expressive data structures designed to make working with "relational" or "labeled" data both easy and intuitive. It aims to be the fundamental high-level building block for doing practical, real world data analysis in Python.

The fundamental package for scientific computing with Python.

Scikit-learn is a Python module for machine learning built on top of SciPy and is distributed under the 3-Clause BSD license.

Dlib is a modern C++ toolkit containing machine learning algorithms and tools for creating complex software in C++ to solve real world problems. Can be used with Python via dlib API

mlpack is an intuitive, fast, and flexible C++ machine learning library with bindings to other languages

Tool for producing high quality forecasts for time series data that has multiple seasonality with linear or non-linear growth.

auto-sklearn is an automated machine learning toolkit and a drop-in replacement for a scikit-learn estimator.

Scikit-Optimize, or skopt, is a simple and efficient library to minimize (very) expensive and noisy black-box functions. It implements several methods for sequential model-based optimization.

Apache Superset is a Data Visualization and Data Exploration Platform

Matplotlib is a comprehensive library for creating static, animated, and interactive visualizations in Python.

Plotly.py is an interactive, open-source, and browser-based graphing library for Python

Seaborn is a Python visualization library based on matplotlib. It provides a high-level interface for drawing attractive statistical graphics.

Bqplot is a 2-D visualization system for Jupyter, based on the constructs of the Grammar of Graphics.

Altair is a declarative statistical visualization library for Python. With Altair, you can spend more time understanding your data and its meaning.

Lime: Explaining the predictions of any machine learning classifier

A game theoretic approach to explain the output of any machine learning model.