Essential Math for Data Science: Basis and Change of Basis

In this article, you will learn what the basis of a vector space is, see that any vectors of the space are linear combinations of the basis vectors, and see how to change the basis using change of basis matrices.

Basis and Change of Basis

One way to understand eigendecomposition is to consider it as a change of basis. You’ll learn in this article what is the basis of a vector space.

You’ll see that any vector of the space are linear combinations of the basis vectors and that the number you see in vectors depends on the basis you choose.

Finally, you’ll see how to change the basis using change of basis matrices.

It is a nice way to consider matrix factorization as eigendecomposition or Singular Value Decomposition. As you can see in Chapter 09 of Essential Math for Data Science, with eigendecomposition, you choose the basis such that the new matrix (the one that is similar to the original matrix) becomes diagonal.

The basis is a coordinate system used to describe vector spaces (sets of vectors). It is a reference that you use to associate numbers with geometric vectors.

To be considered as a basis, a set of vectors must:

Every vector in the space is a unique combination of the basis vectors. The dimension of a space is defined to be the size of a basis set. For instance, there are two basis vectors in ℝ2 (corresponding to the x and y-axis in the Cartesian plane), or three in ℝ3.

As shown in section 7.4 of Essential Math for Data Science, if the number of vectors in a set is larger than the dimensions of the space, they can’t be linearly independent. If a set contains fewer vectors than the number of dimensions, these vectors can’t span the whole space.

As you saw, vectors can be represented as arrows going from the origin to a point in space. The coordinates of this point can be stored in a list. The geometric representation of a vector in the Cartesian plane implies that we take a reference: the directions given by the two axes x and y.

Basis vectors are the vectors corresponding to this reference. In the Cartesian plane, the basis vectors are orthogonal unit vectors (length of one), generally denoted as i and j. 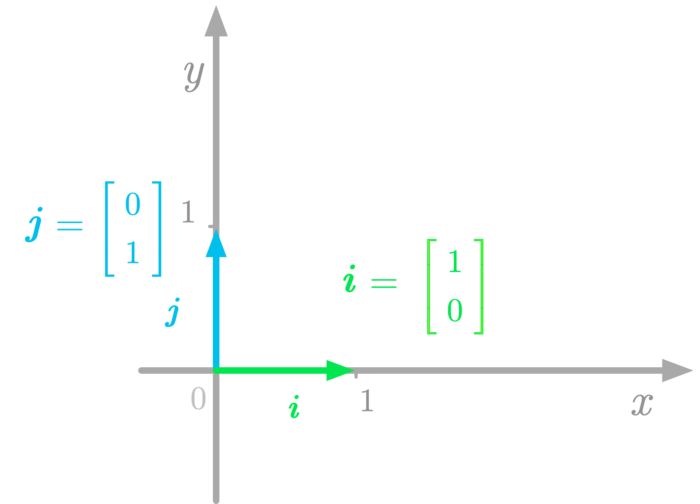 Figure 1: The basis vectors in the Cartesian plane.

For instance, in Figure 1, the basis vectors i and j point in the direction of the x-axis and y-axis respectively. These vectors give the standard basis. If you put these basis vectors into a matrix, you have the following identity matrix (for more details about identity matrices, see 6.4.3 in Essential Math for Data Science):

The basis of your vector space is very important because the values of the coordinates corresponding to the vectors depend on this basis. By the way, you can choose different basis vectors, like in the ones in Figure 2 for instance. 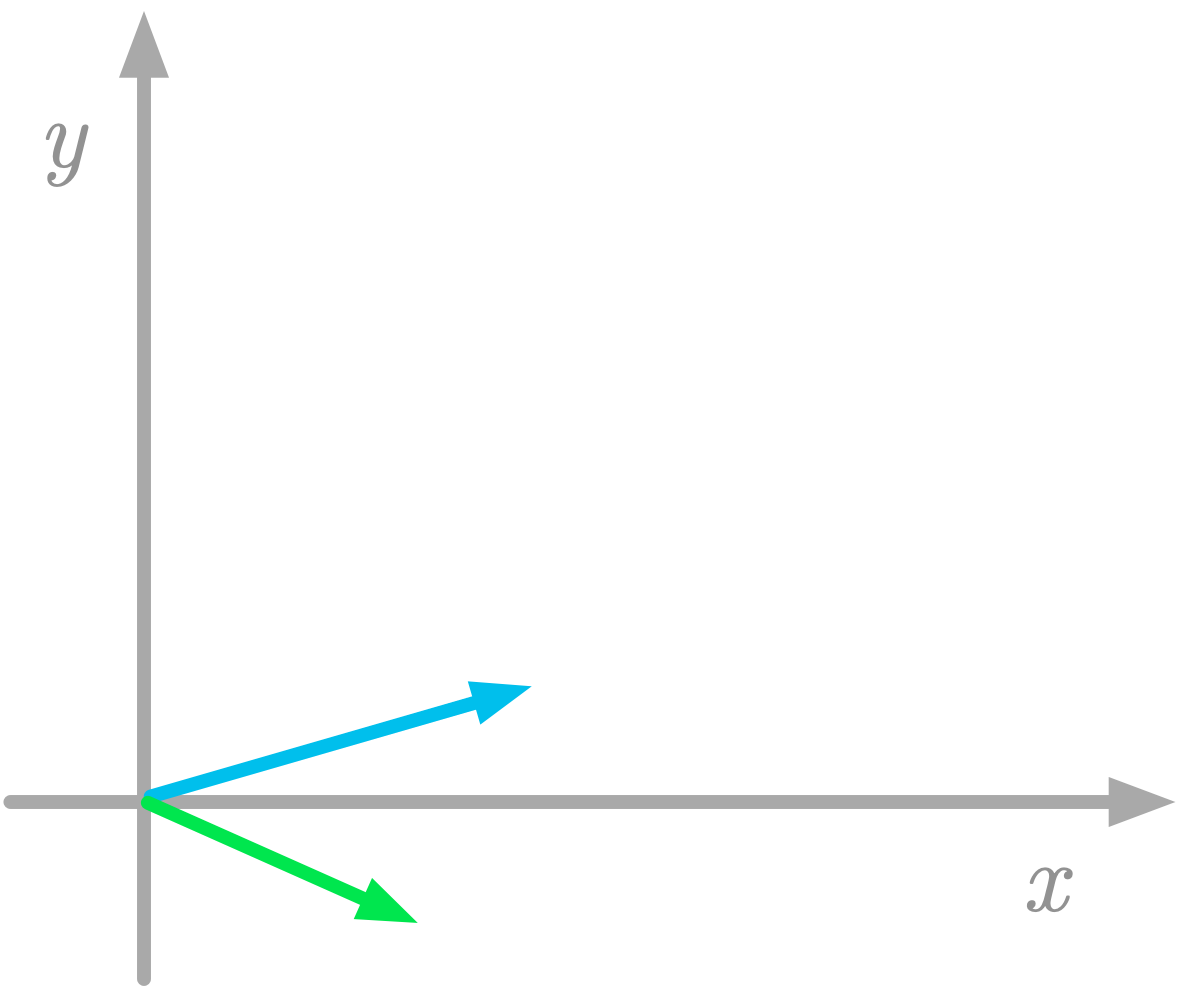 Figure 2: Another set of basis vectors.

Keep in mind that vector coordinates depend on an implicit choice of basis vectors.

You can consider any vector in a vector space as a linear combination of the basis vectors. 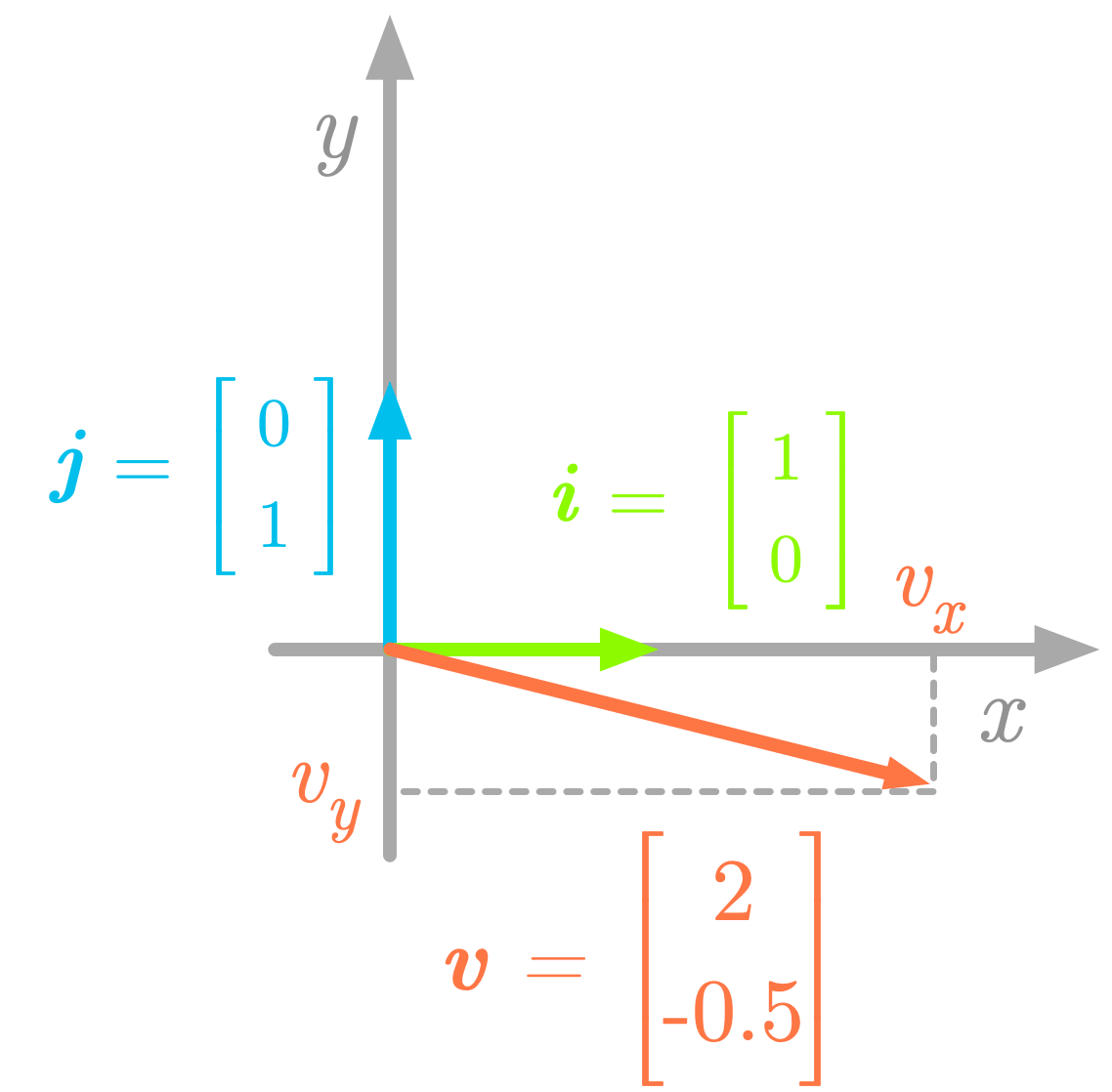 Figure 3: Components of the vector v. 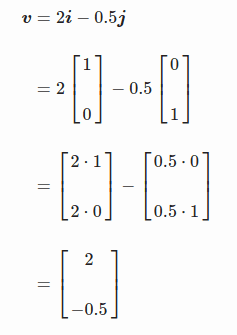 For instance, let’s consider the following vectors in ℝ2:

The vectors v and w are represented in Figure 4. 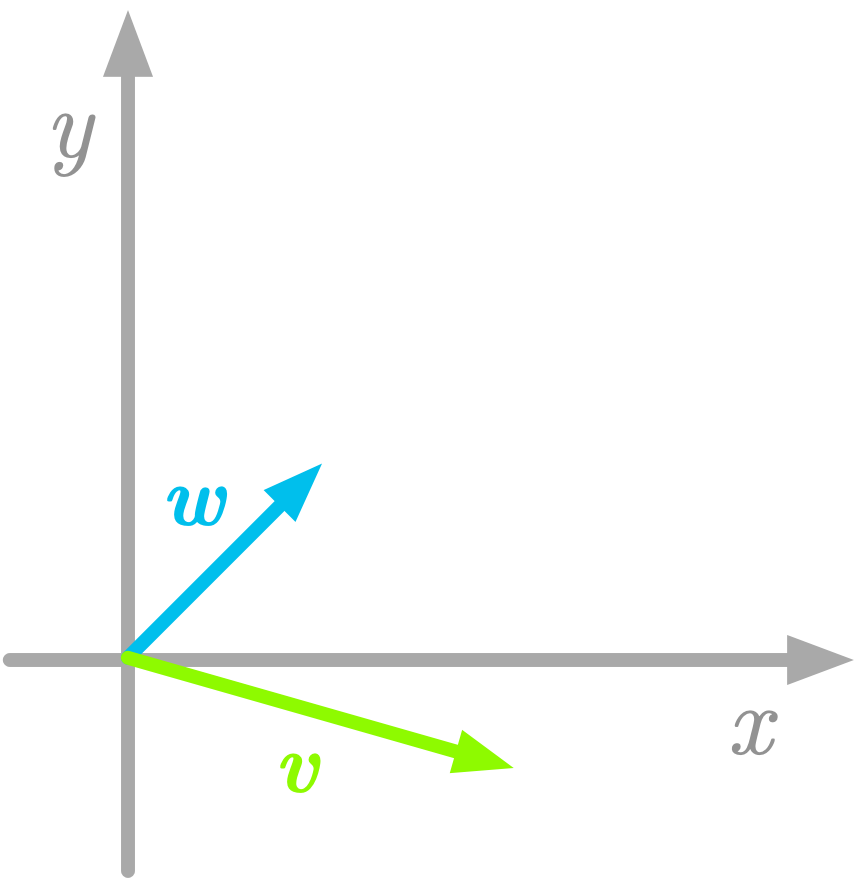 Figure 4: Another basis in a two-dimensional space.

It is critical to keep in mind that, when you use the components of vectors (for instance vx and vy, the x and y components of the vector v), the values are relative to the basis you chose. If you use another basis, these values will be different.

You can see in Chapter 09 and 10 of Essential Math for Data Science that the ability to change the bases is fundamental in linear algebra and is key to understand eigendecomposition or Singular Value Decomposition.

Vectors Are Defined With Respect to a Basis

You saw that to associate geometric vectors (arrows in the space) with coordinate vectors (arrays of numbers), you need a reference. This reference is the basis of your vector space. For this reason, a vector should always be defined with respect to a basis.

The values of the x and y components are respectively 2 and -0.5. The standard basis is used when not specified.

You could write Iv to specify that these numbers correspond to coordinates with respect to the standard basis. In this case i is called the change of basis matrix.

You can define vectors with respect to another basis by using another matrix than i.

Linear Combinations of the Basis Vectors

Vector spaces (the set of possible vectors) are characterized in reference to a basis. The expression of a geometrical vector as an array of numbers implies that you choose a basis. With a different basis, the same vector v is associated with different numbers.

In the ℝ2 Cartesian plane, you can consider v as a linear combination of the standard basis vectors i and j, as shown in Figure 5. 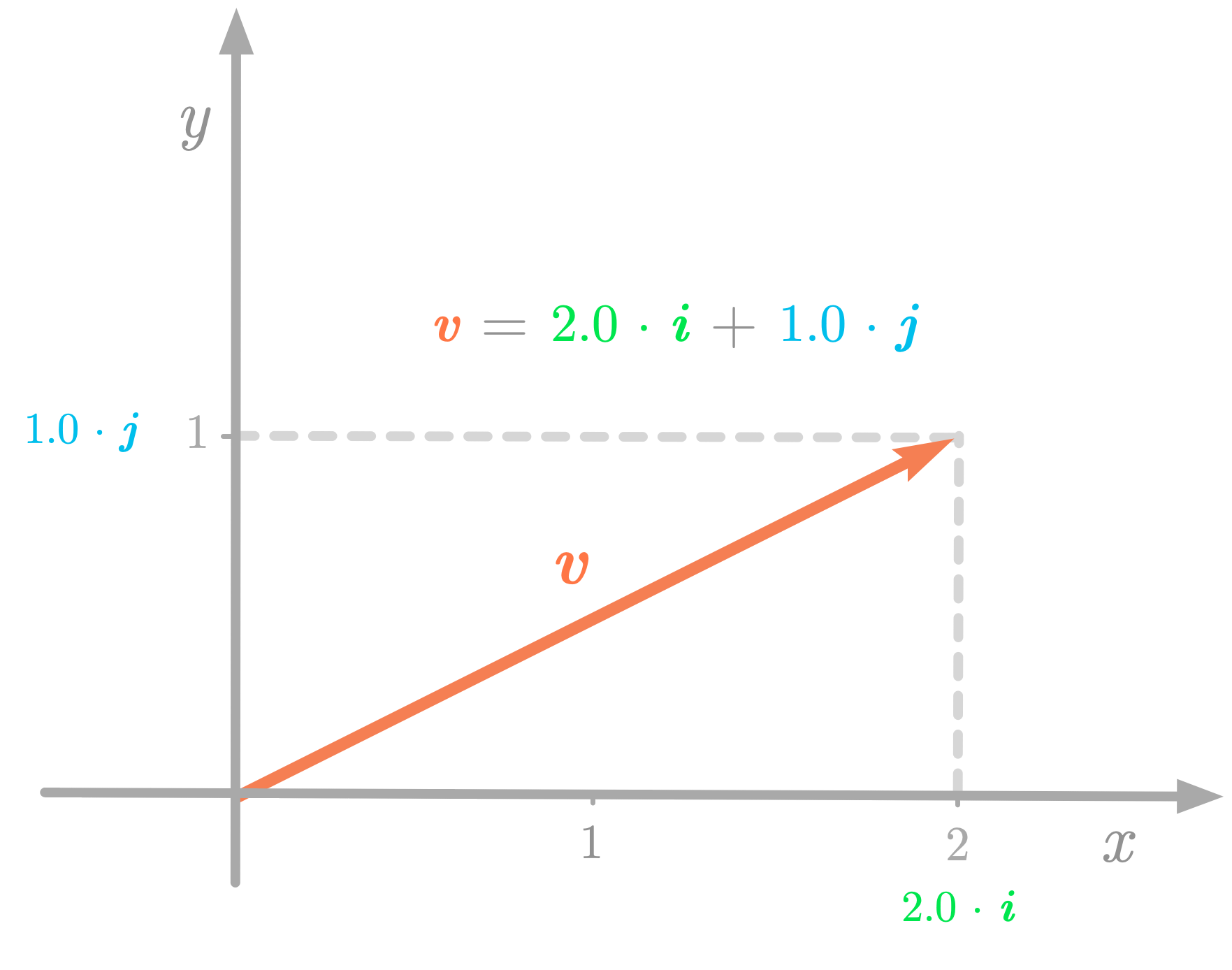 Figure 5: The vector v can be described as a linear combination of the basis vectors i and j. 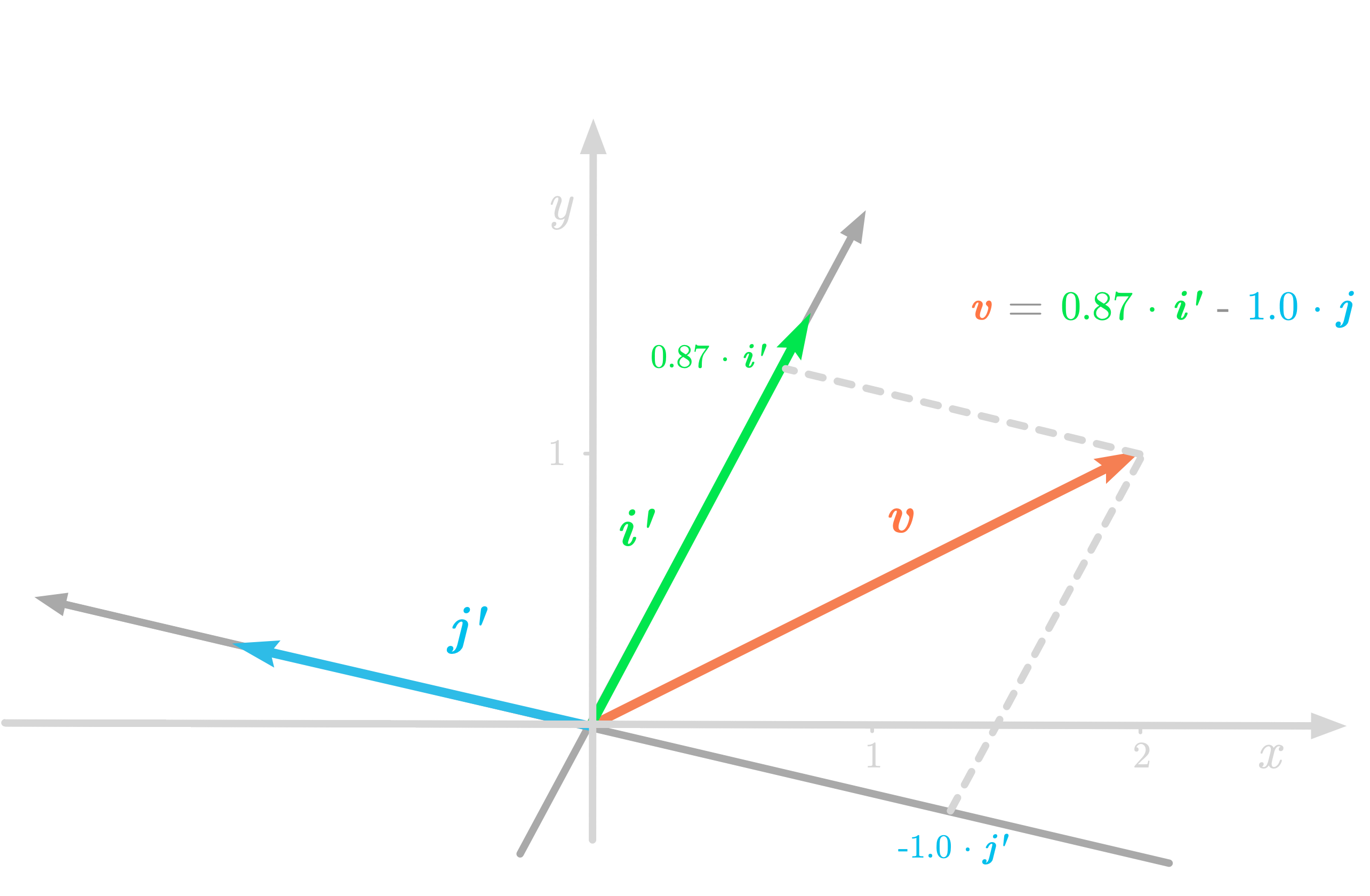 Figure 6: The vector v with respect to the coordinates of the new basis.

In the new basis, v is a new set of numbers:

The Change of Basis Matrix

You can use a change of basis matrix to go from a basis to another. To find the matrix corresponding to new basis vectors, you can express these new basis vectors (i′ and j′) as coordinates in the old basis (i and j).

Let’s take again the preceding example. You have:

This is illustrated in Figure 7. 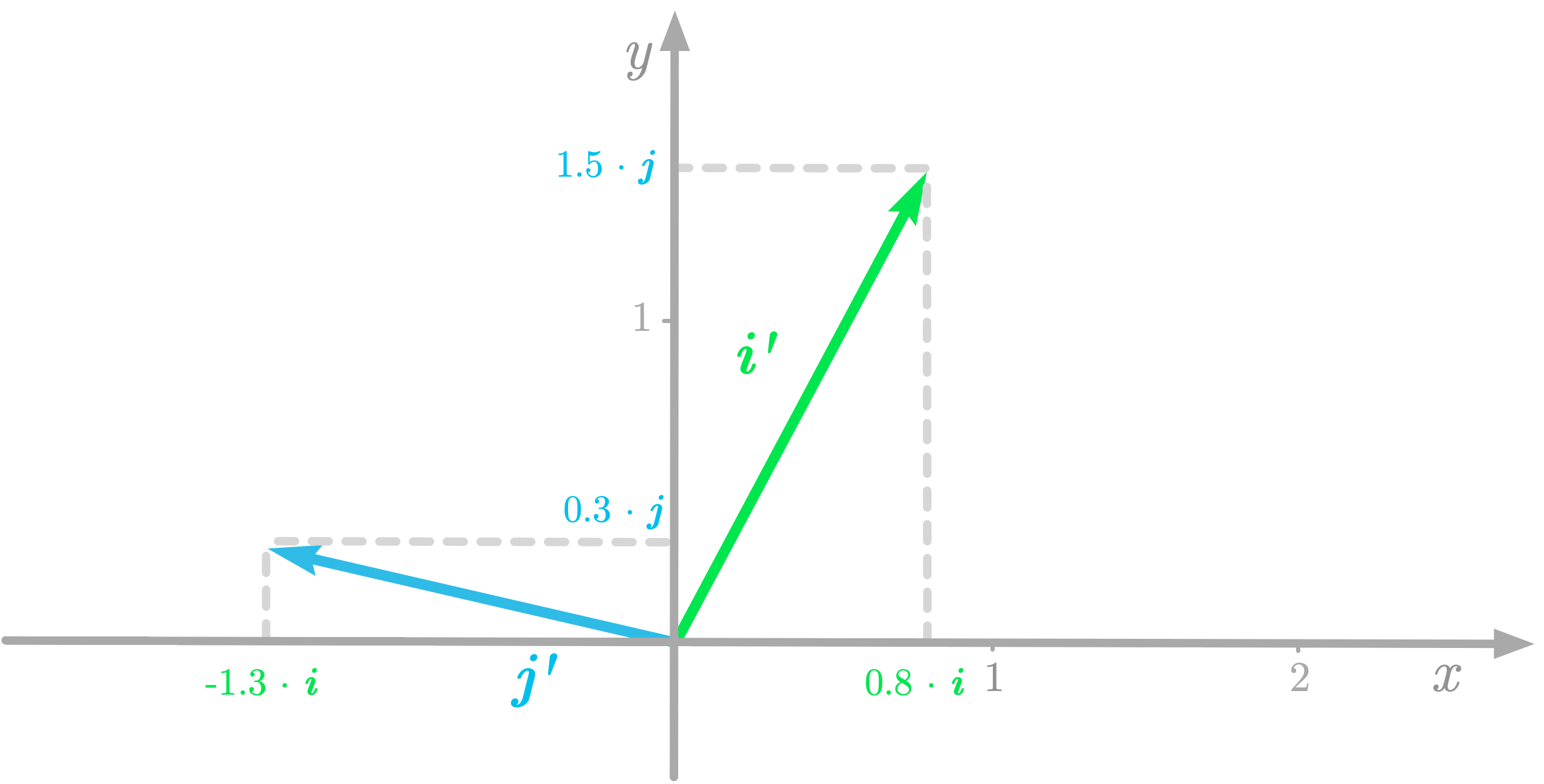 Figure 7: The coordinates of the new basis vectors with respect to the old basis.

Since they are basis vectors, i′ and j′ can be expressed as linear combinations of i and j.:

Let’s write these equations under the matrix form:

To have the basis vectors as columns, you need to transpose the matrices. You get:

This matrix is called the change of basis matrix. Let’s call it CC:

Change of basis vs linear transformation

Finding the Change of Basis Matrix

From the equation of the change of basis, you have:

If you want to find the change of basis matrix given B1 and B2, you need to calculate the inverse of B1 to isolate C:

In words, you can calculate the change of basis matrix by multiplying the inverse of the input basis matrix (

, which contains the input basis vectors as columns) by the output basis matrix (

, which contains the output basis vectors as columns).

Converting vectors from the output to the input basis

Be careful, this change of basis matrix allows you to convert vectors from

and not the opposite. Intuitively, this is because moving an object is the opposite to moving the reference. Thus, to go from

, you must use the inverse of the change of basis matrix

Note that if the input basis is the standard basis (

Example: Changing the Basis of a Vector

Let’s change the basis of a vector v, using again the geometric vectors represented in Figure 6.

and the new basis as

. Remember that the basis is a matrix containing the basis vectors as columns. You have:

Let’s denote the vector v relative to the basis

To distinguish the basis used to define a vector, you can put the basis name (like

) in subscript after the vector name enclosed in square brackets. For instance,  denotes the vector v relative to the basis

, also called the representation of v with respect to 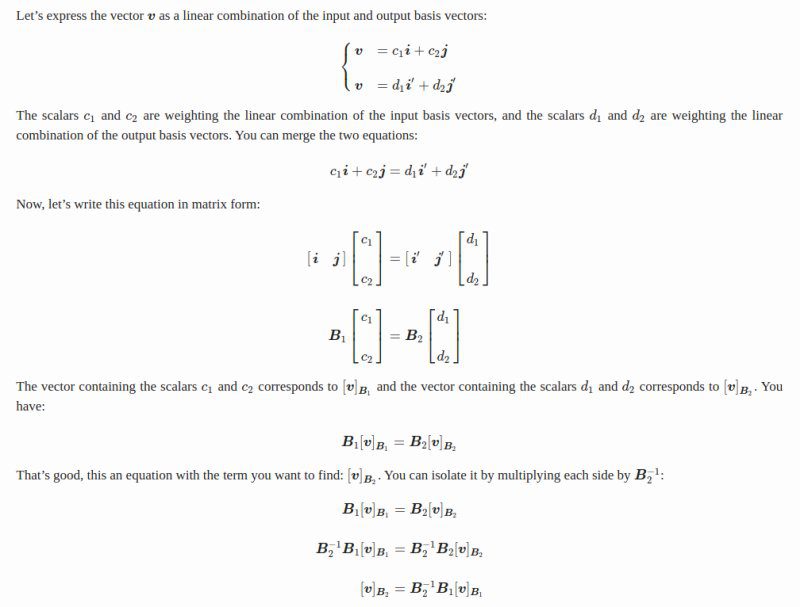