Machines only understand numbers. For instance, if you want to create a spam detector, you have first to convert your text data into numbers (for instance, through word embeddings). Data can then be stored in vectors, matrices, and tensors. For instance, images are represented as matrices of values between 0 and 255 representing the luminosity of each color for each pixel. It is possible to leverage the tools and concepts from the field of linear algebra to manipulate these vectors, matrices and tensors.

Linear algebra deals with vectors. Other mathematical entities in the field can be defined by their relationship to vectors: scalars, for example, are single numbers that scale vectors (stretching or contracting) when they are multiplied by them.

However, vectors refer to various concepts according to the field they are used in. In the context of data science, they are a way to store values from your data. For instance, take the height and weight of people: since they are distinct values with different meanings, you need to store them separately, for instance using two vectors. You can then do operations on vectors to manipulate these features without loosing the fact that the values correspond to different attributes.

You can also use vectors to store data samples, for instance, store the height of ten people as a vector containing ten values.

We’ll use lowercase, boldface letters to name vectors (such as vv). As usual, refer to the Appendix in Essential Math for Data Science to have the summary of the notations used in this book.

The word vector can refer to multiple concepts. Let’s learn more about geometric and coordinate vectors.

Coordinates are values describing a position. For instance, any position on earth can be specified by geographical coordinates (latitude, longitude, and elevation).

Geometric vectors, also called Euclidean vectors, are mathematical objects defined by their magnitude (the length) and their direction. These properties allow you to describe the displacement from a location to another. 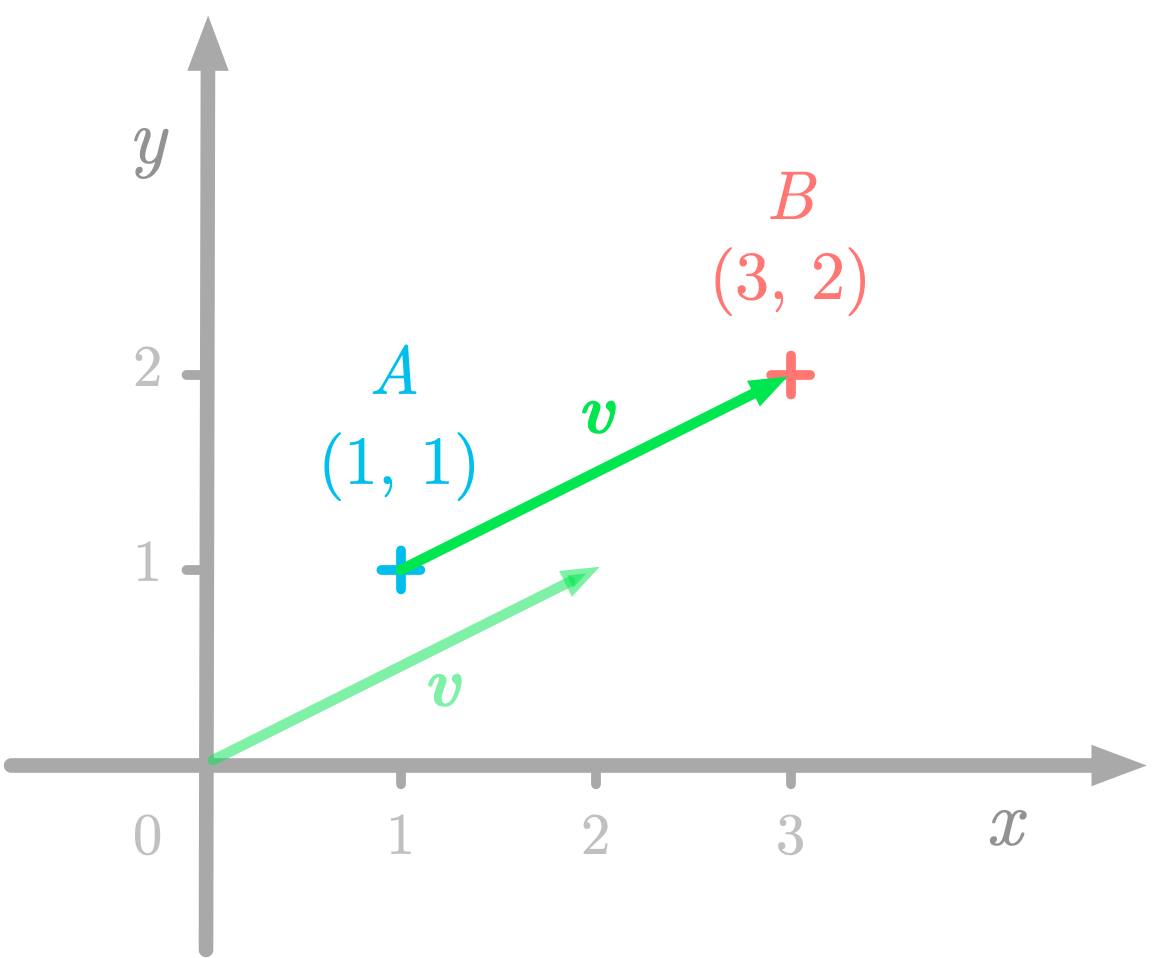 Figure 1: A geometric vector running from A to B.

For instance, Figure 1 shows that the point A has coordinates (1, 1) and the point B has coordinates (3, 2). The geometric vectors v describes the displacement from A to B, but since vectors are defined by their magnitude and direction, you can also represent v as starting from the origin.

In Figure 1, we used a coordinate system called the Cartesian plane. The horizontal and vertical lines are the coordinate axes, usually labeled respectively x and y. The intersection of the two coordinates is called the origin and corresponds to the coordinate 0 for each axis.

. For instance, the space

is the two-dimensional space containing pairs of real numbers (the coordinates). In three dimensions (

), a point in space is represented by three real numbers.

Coordinate vectors are ordered lists of numbers corresponding to the vector coordinates. Since vector initial points are at the origin, you need to encode only the coordinates of the terminal point. 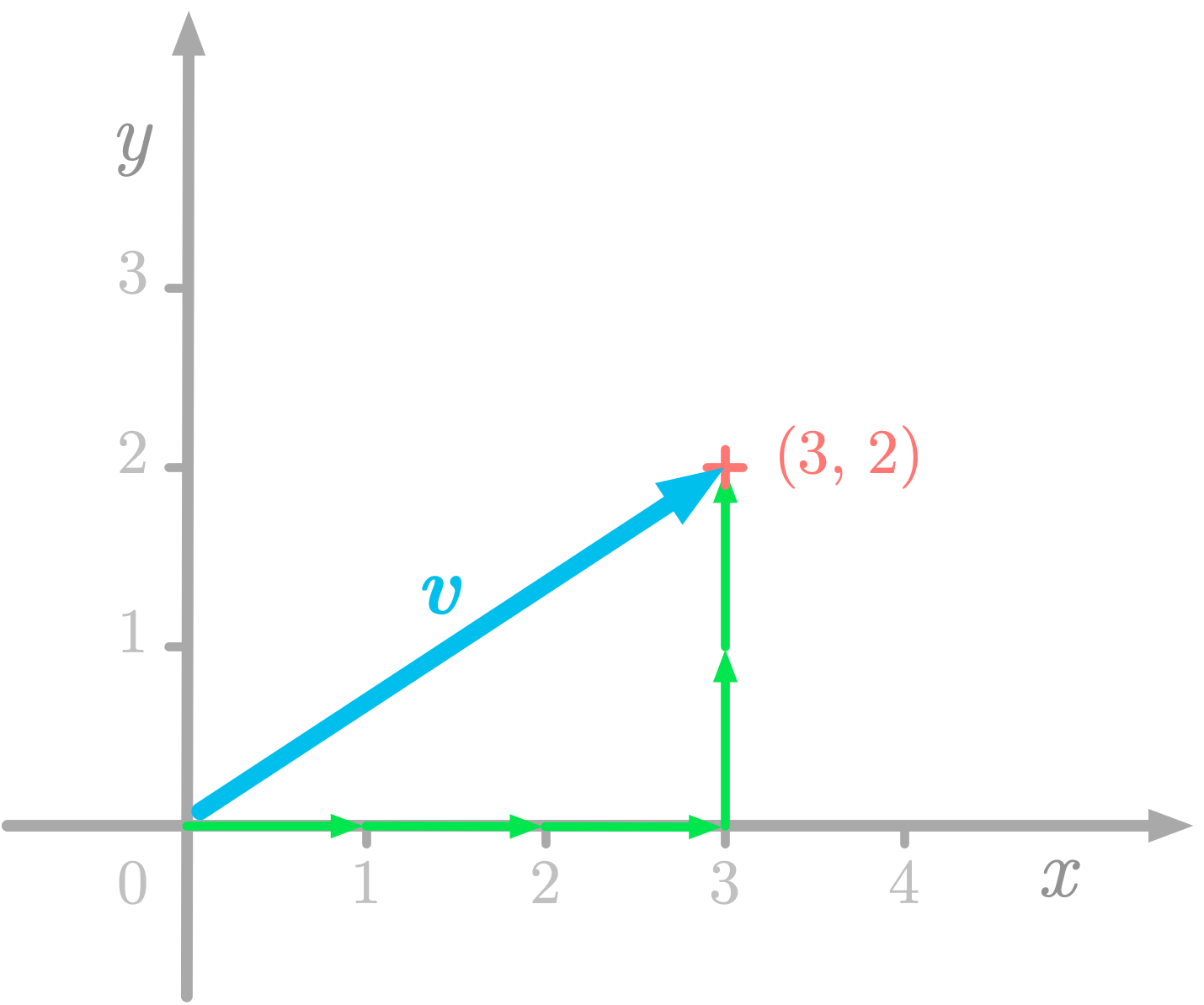 Figure 2: The vector vv has coordinates (3, 2) corresponding to three units from the origin on the x-axis and two on the y-axis.

For instance, let’s take the vector v represented in Figure 2. The corresponding coordinate vector is as follows:

Each value is associated with a direction: in this case, the first value corresponds to the the xx-axis direction and the second number to the y-axis. 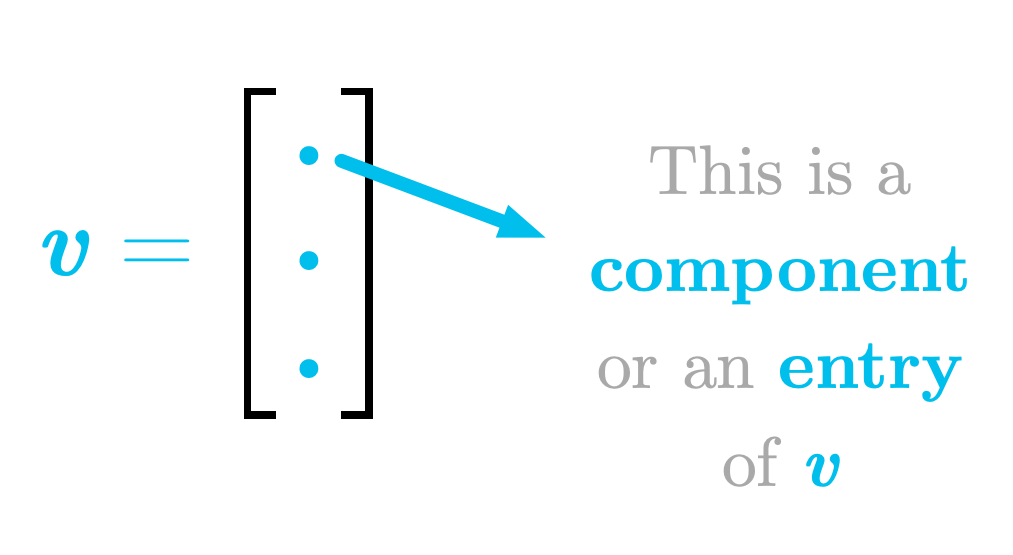 Figure 3: Components of a coordinate vector.

As illustrated in Figure 3, these values are called components or entries of the vector. 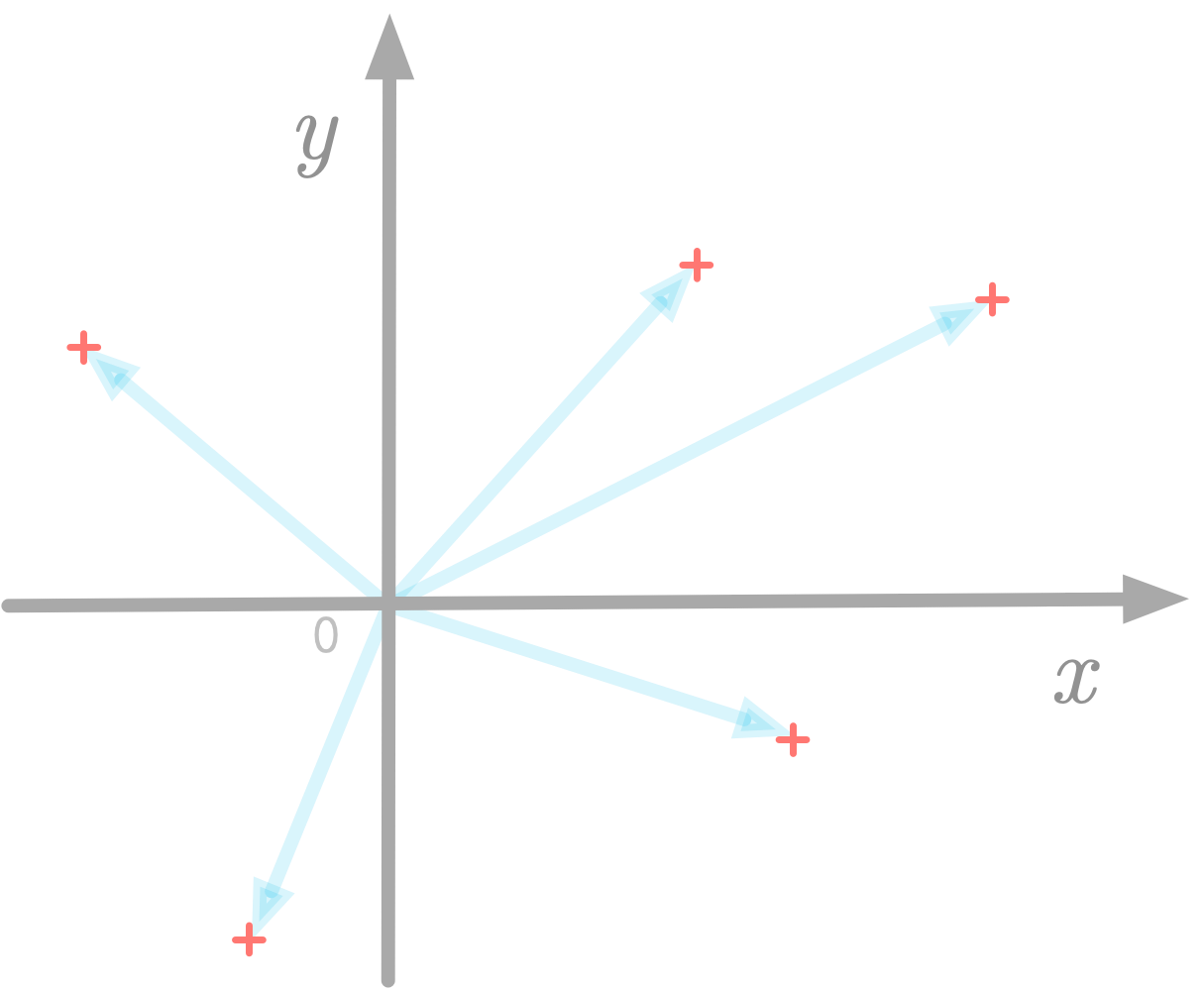 Figure 4: Vectors can be represented as points in the Cartesian plane.

In addition, as represented in Figure 4, you can simply represent the terminal point of the arrow: this is a scatter-plot.

Indexing refers to the process of getting a vector component (one of the values from the vector) using its position (its index).

In Numpy, vectors are called one-dimensional arrays. You can use the function np.array() to create one:

Let’s take the example of v, a three-dimensional vectors defined as follows:

As shown in in Figure 5, you can reach the endpoint of the vector by traveling 3 units in the xx-axis, 4 in the yy-axis, and 2 in the zz-axis. 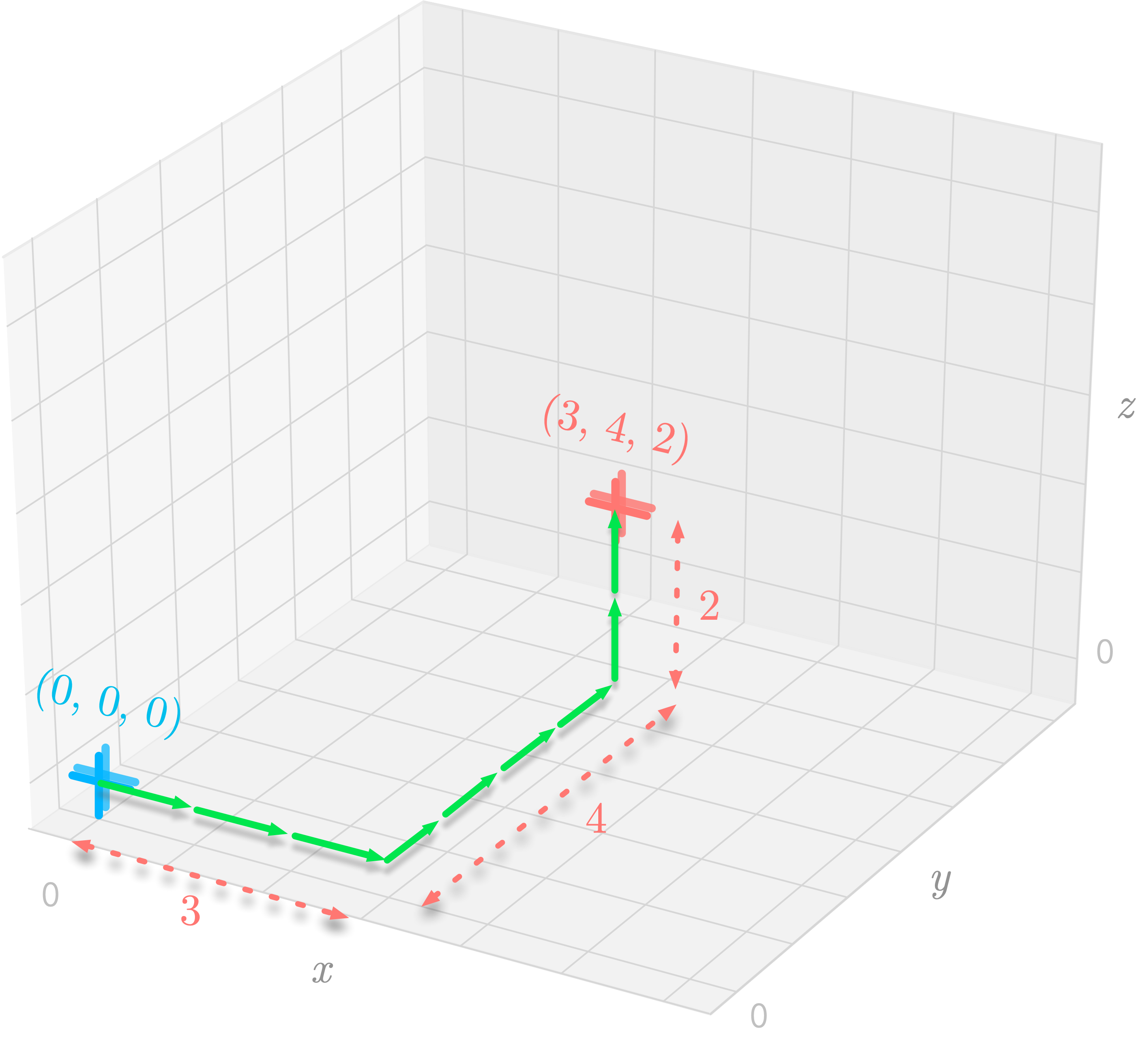 More generally, in a n-dimensional space, the position of a terminal point is described by n components.

. It expresses the real coordinate space: this is the nn-dimensional space with real numbers as coordinate values.

For instance, vectors in

have three components, as the following vector v for example:

In the context of data science, you can use coordinate vectors to represent your data.

You can represent data samples as vectors with each component corresponding to a feature. For instance, in a real estate dataset, you could have a vector corresponding to an apartment with its features as different components (like the number of rooms, the location etc.).

Another way to do it is to create one vector per feature, each containing all observations.

Storing data in vectors allows you to leverage linear algebra tools. Note that, even if you can’t visualize vectors with a large number of components, you can still apply the same operations on them. This means that you can get insights about linear algebra using two or three dimensions, and then, use what you learn with a larger number of dimensions.

The dot product (referring to the dot symbol used to characterize this operation), also called scalar product, is an operation done on vectors. It takes two vectors, but unlike addition and scalar multiplication, it returns a single number (a scalar, hence the name). It is an example of a more general operation called the inner product.

Figure 6: Illustration of the dot product.

Figure 6 shows an illustration of how the dot product works. You can see that it corresponds to the sum of the multiplication of the components with same index.

The dot product between two vectors u and v, denoted by the symbol ⋅, is defined as the sum of the product of each pair of components. More formally, it is expressed as:

Note that the symbol of the dot product is the same as the dot used to refer to multiplication between scalars. The context (if the elements are scalars or vectors) tells you which one it is.

Let’s take an example. You have the following vectors:

The dot product of these two vectors is defined as:

The dot product between u and v is 35. It converts the two vectors u and v into a scalar.

Let’s use Numpy to calculate the dot product of these vectors. You can use the method dot() of Numpy arrays:

It is also possible to use the following equivalent syntax:

Note that the dot product is different from the element-wise multiplication, also called the Hadamard product, which returns another vector. The symbol ⊙⊙ is generally used to characterize this operation. For instance:

The squared L2 norm can be calculated using the dot product of the vector with itself (u ⋅ u):

This is an important property in machine learning, as you saw in Essential Math for Data Science.

How can you interpret the dot product operation with geometric vectors. You have seen in Essential Math for Data Science the geometric interpretation of the addition and scalar multiplication of vectors, but what about the dot product?

First, let’s calculate the dot product of u and v:

What is the meaning of this scalar? Well, it is related to the idea of projecting u onto v. 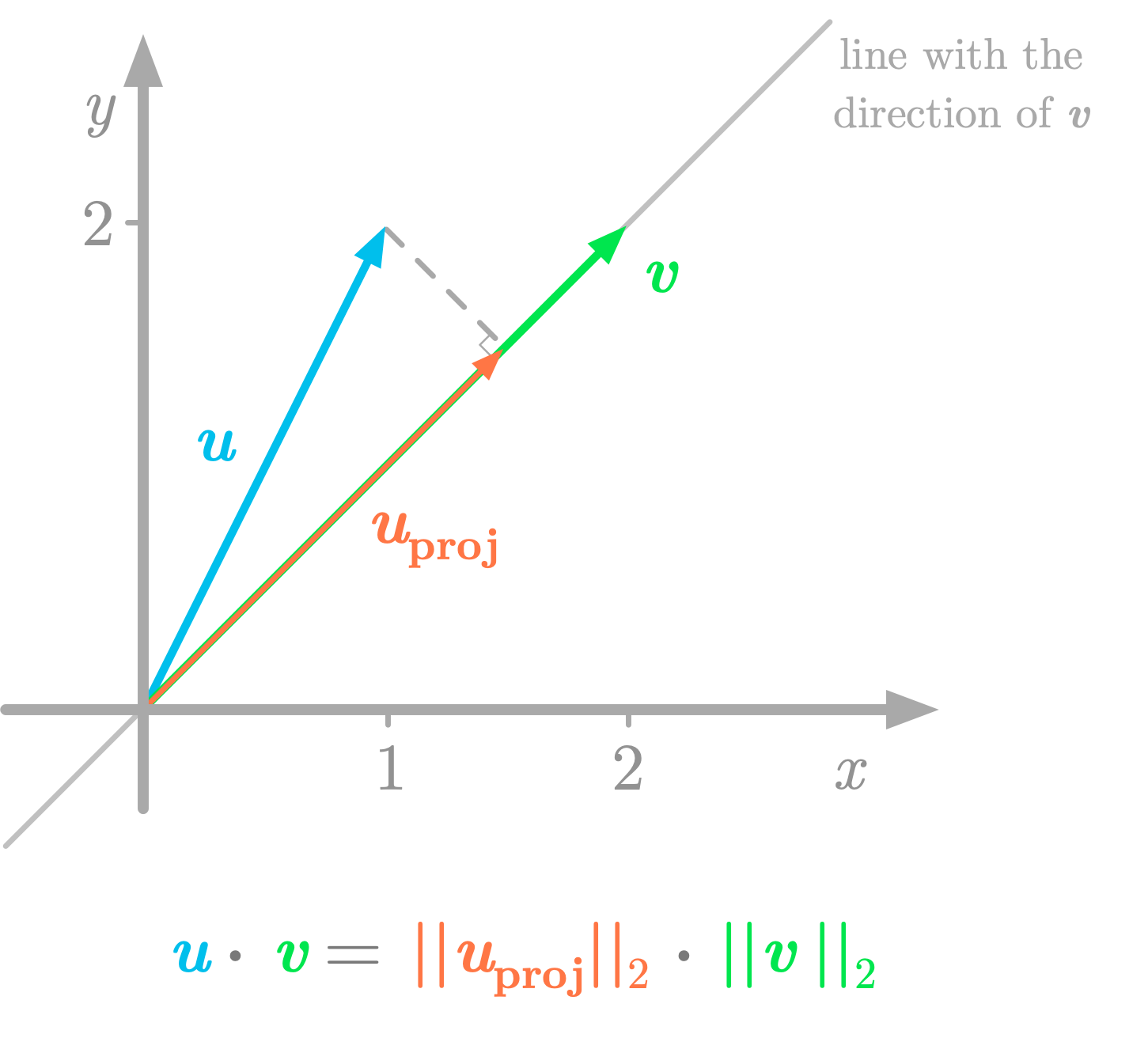 Note that the elements are scalars, so the dot symbol refers to a multiplication of these values. And you have:

The projection of u onto v is defined as follows (you can refer to Essential Math for Data Science to see the mathematical details about the projection of a vector onto a line):

Let’s review some properties of the dot product.

The dot product is distributive. This means that, for instance, with the three vectors u, v and w, you have:

The dot product is not associative, meaning that the order of the operations matters. For instance:

The dot product is not a binary operator: the result of the dot product between two vectors is not another vector (but a scalar).

The dot product between vectors is said to be commutative. This means that the order of the vectors around the dot product doesn’t matter. You have:

However, be careful, because this is not necessarily true for matrices.