Continuing the deep dive into the sea of NLP, this post is all about training tokenizers from scratch by leveraging Hugging Face’s tokenizers package.

Tokenization is often regarded as a subfield of NLP but it has its own story of evolution and how it has reached its current stage where it is underpinning the state-of-the-art NLP models.

Before we get to the fun part of training and comparing the different tokenizers, I want to give you a brief summary of the key differences between the algorithms.

The main difference lies in the choice of character pairs to merge and the merging policy that each of these algorithms uses to generate the final set of tokens. 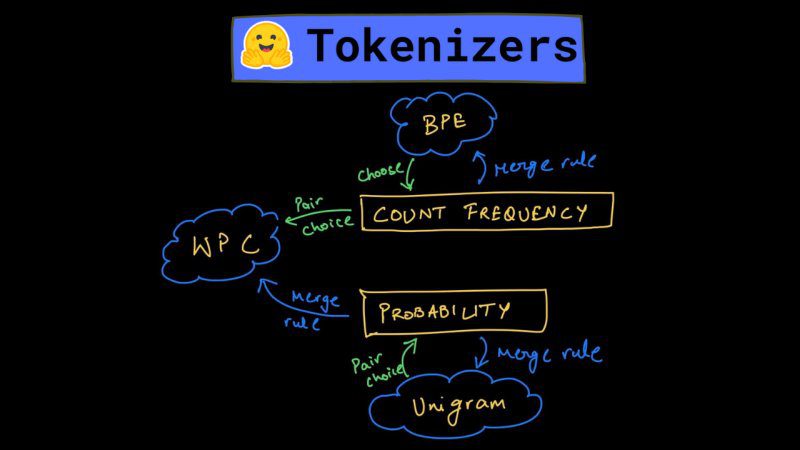 With the algorithmic differences covered, I tried to implement each of these algorithms(not from scratch) to compare the output generated by each of them.

Now, in order to have an unbiased comparison of outputs, I didn’t want to use pretrained algorithms as that would bring size, quality, and the content of the dataset into the picture.

One way could be to code these algorithms from scratch using the research papers and then test them out which is a good approach in order to truly understand the working of each algorithm but you might end up spending weeks doing that.

I instead used the Hugging Face’s tokenizers package that offers the implementation of all today’s most used tokenizers. It also allows me to train these models from scratch on my choice of dataset and then tokenize the input string of our own choice.

I chose two different datasets to train these models, one is a free book from Gutenberg which serves as a small dataset and the other one is the wikitext-103 which is 516M of text.

In the Colab, you can download the datasets first and unzip them(if required),

Import the required models and trainers

Going through the documentation, you’ll find that the main API of the package is the class Tokenizer.

You can then instantiate any tokenizer with your choice of model(BPE/ Unigram/ WordPiece).

Here, I imported the main class, all the models I wanted to test, and their trainers as I want to train these models from scratch.

Since I need to perform somewhat similar processes for three different models, I broke the processes into 3 functions. I’ll only need to call these functions for each model and my job here would be done.

To train the instantiated tokenizer on the small and large datasets, we will also need to instantiate a trainer, in our case, these would be BpeTrainer, WordLevelTrainer, WordPieceTrainer, and UnigramTrainer.

The instantiation and training will need us to specify some special tokens. These are tokens for unknown words and other special tokens that we’d need to use later on to add to our vocabulary.

You can also specify other training arguments vocabulary size or minimum frequency here.

We’ll also need to add a pre-tokenizer to split our input to words as without a pre-tokenizer, we might get tokens that overlap several words: for instance, we could get an "there is" token since those two words often appear next to each other.

This function will return the tokenizer and its trainer object which can be used to train the model on a dataset.

Here, we are using the same pre-tokenizer (Whitespace) for all the models. You can choose to test it with others.

After preparing the tokenizers and trainers, we can start the training process.

Here’s a function that will take the file(s) on which we intend to train our tokenizer along with the algorithm identifier.

After training, it saves the model in a JSON file, loads it from the file, and returns the trained tokenizer to start encoding the new input.

The last step is to start encoding the new input strings and compare the tokens generated by each algorithm.

Here, we’ll be writing a nested for loop to train each model on the smaller dataset first followed by training on the larger dataset and tokenizing the input string as well.

Analysis of the output:

Looking at the output, you’ll see the difference in how the tokens were generated which in turn led to a different number of tokens generated.

With a larger dataset, merging came closer to generating tokens that are better suited to encode real-world English language that we often use.

To compare the tokens, I stored the output of each algorithm in a dictionary and I’ll turn it into a dataframe to view the differences in tokens better.

Since the number of tokens generated by each model is different, I’ve added a <PAD> token to make the data rectangular and fit a dataframe.

<PAD> is basically nan in the dataframe.

You can also look at the difference in tokens using sets:

All the code can be found in this Colab notebook.

Closing thoughts and next steps!

Based on the kind of tokens generated, WPC does seem to generate subword tokens that are more commonly found in the English language but don’t hold me accountable for this observation.

These algorithms are slightly different from each other and do a somewhat similar job of developing a decent NLP model. But much of the performance depends on the use case of your language model, the vocabulary size, speed, and other factors.

A further advancement to these algorithms is the SentencePiece algorithm which is a wholesome approach to the whole tokenization problem but much of this problem is alleviated by HuggingFace and even better, they have all the algorithms implemented in a single GitHub repo.

If you disagree with my analysis or any of my work in this post, I find highly encourage you to check out these resources for a precise understanding of the working of each algorithm:

If you’re looking to start in the field of data science or ML, check out my course on Foundations of Data Science & ML.

If you would like to see more of such content and you are not a subscriber, consider subscribing to my newsletter using the button below.

Have something to add or suggest, reply to this email, or comment on the post on Substack.