What is Clustering and How Does it Work?

Let us examine how clusters with different properties are produced by different clustering algorithms. In particular, we give an overview of three clustering methods: k-Means clustering, hierarchical clustering, and DBSCAN.

Let's get straight into it and take a look at this scatter plot to explain. As you may notice, data points seem to concentrate into distinct groups (Figure 1). 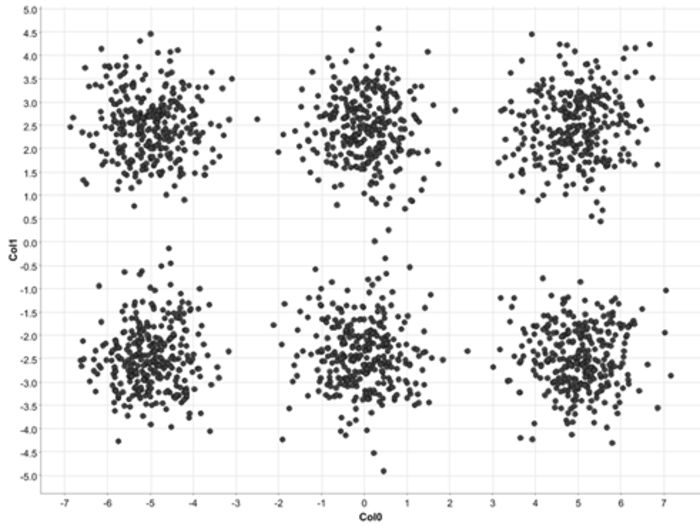 Fig. 1. A scatter plot of the example data

To make this obvious, we show the same data but now data points are colored (Figure 2). These points concentrate in different groups, or clusters, because their coordinates are close to each other. In this example, spatial coordinates represent two numerical features, and their spatial proximity can be interpreted as how similar they are in terms of their features. Realistically speaking, we may have many features in our dataset, but the idea of closeness (=similarity) still applies even in a higher dimensional space. Moreover, it is not unusual to observe clusters in real data, representing different groups of data points with similar characteristics. 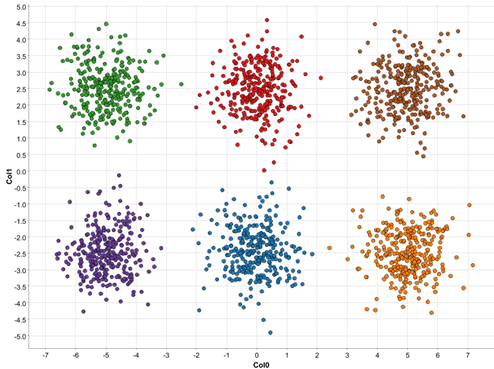 Fig. 2. A scatter plot of the example data, with different clusters denoted by different colors

Clustering refers to algorithms to uncover such clusters in unlabeled data. Data points belonging to the same cluster exhibit similar features, whereas data points from different clusters are dissimilar to each other. The identification of such clusters leads to segmentation of data points into a number of distinct groups. Since groups are identified from the data itself, as opposed to known target classes, clustering is considered as unsupervised learning.

As you have seen already, clustering can identify (previously unknown) groups in the data. Relatively homogenous data points belonging to the same cluster can be summarized by a single cluster representative, and this enables data reduction. Clustering can also be used to identify unusual observations distinct from other clusters, such as outliers and noises.

How Does Clustering Work?

Clusters formed by k-Means clustering tend to be similar in sizes. Moreover, clusters are convex-shaped. k-Means clustering is known for its sensitivity to outliers. Also clustering results may be highly influenced by the choice of the initial cluster centers.

Fig. 6. A dendrogram (left) resulting from hierarchical clustering. As the distance cut-off is raised, larger clusters are formed. Clusters are denoted in different colors in the scatter plot (right), as well as the dendrogram.

Hierarchical clustering forms a hierarchy of clusters, described in a diagram known as a dendrogram (Figure 6, left). A dendrogram describes which data points / clusters are connected at what distance, starting from individual data points at the bottom all the way to the one single large cluster at the top. To obtain a cluster partition with a particular number of clusters, one can simply apply a cut-off threshold at a particular distance on the dendrogram, producing the desired number of clusters (Figure 7). 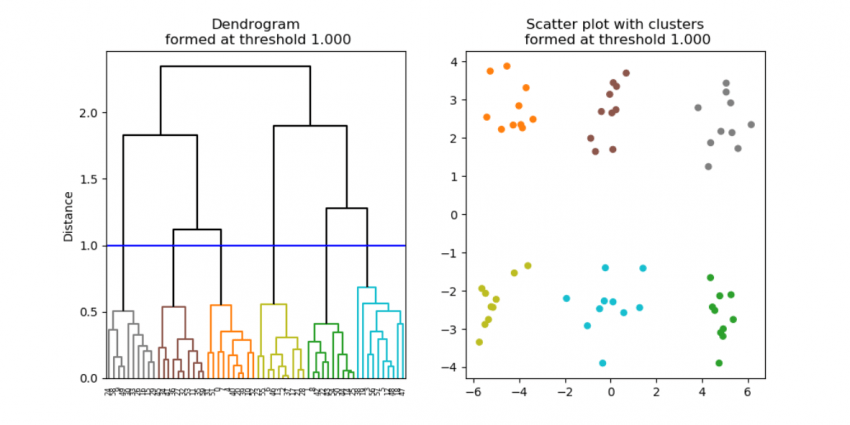 Fig. 7. Six clusters are formed at the cut-off threshold of 1.0.

Fig. 10. The cluster formation process with the DBSCAN algorithm. 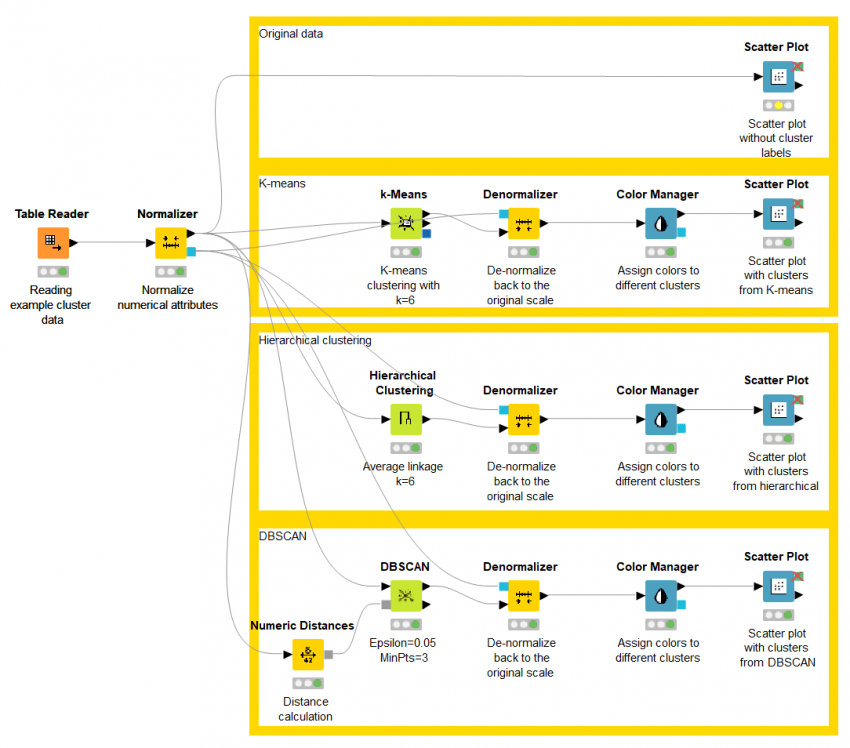 As an example, the simulated clustered dataset from the beginning (Fig. 1) is analyzed with the three clustering algorithms. The resulting clusters are shown in Figure 13. Since clustering algorithms deal with unlabeled data, cluster labels are arbitrarily assigned. It should be noted that we set the number of clusters K=6 in the k-Means and the hierarchical clustering, although in a realistic scenario such information is unavailable. As you can see in this example, the three methods produce very similar clusters. 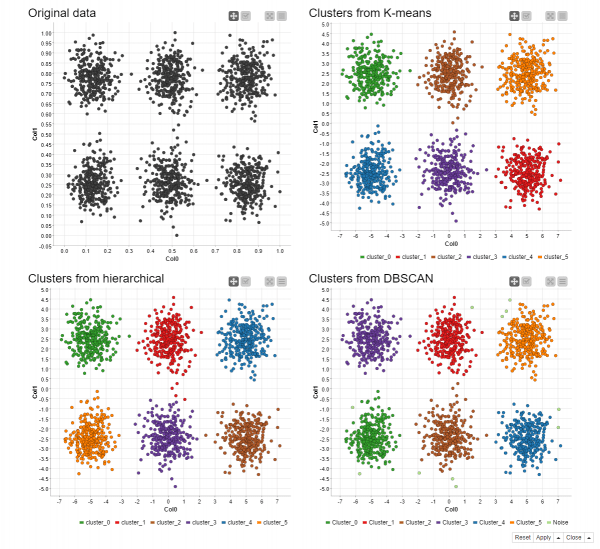 In a real dataset, however, not all clustering algorithms perform the same. In the next example, the iris data (consisting of 3 classes of irises along with 4 numerical features) are analyzed with the same algorithms. The workflow, Clustering on the Iris data, is available on KNIME Hub at https://kni.me/w/zZheoPIKtcJ8rTJb. There are two major concentrations of data points in this dataset, with a clear gap between them (Figure 14, top left). I refer to them as the upper and lower clouds. As the k-Means clustering tends to produce convex clusters of similar sizes, it separates the upper cloud roughly in the middle (Figure 14, top right). As for the hierarchical clustering, we use the average linkage method, favoring both compact and well-separated clusters. Since there is no apparent gap in the upper cloud, it is split into one compact cluster and one larger cluster (Figure 14, bottom left). The results from the k-Means and the hierarchical clustering are driven by the fact that we set K=3 in both methods. As for the DBSCAN method, the upper cloud is identified as a single cluster (Figure 14, bottom right). 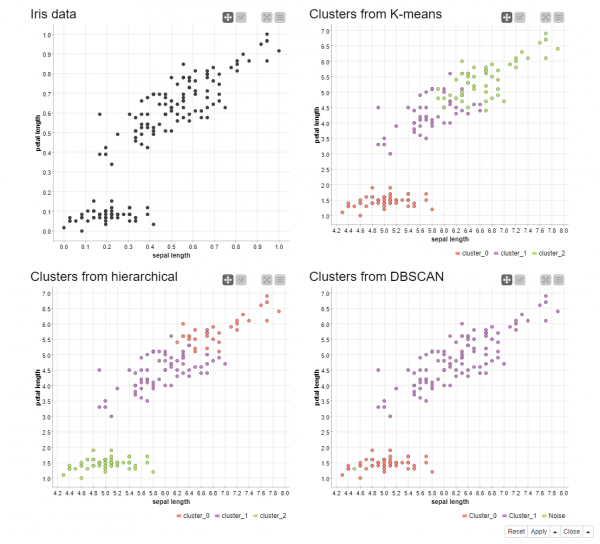 Bio: Satoru Hayasaka was trained in statistical analysis of various types of biomedical data. He has taught several courses on data analysis geared toward non-experts and beginners. Prior to joining KNIME, Satoru taught introductory machine learning courses to graduate students from different disciplines. Based in Austin, TX, he is part of the evangelism team, and he continues teaching machine learning and data mining using KNIME software. Satoru received his PhD in biostatistics from the University of Michigan, and completed his post-doctoral training at University of California, San Francisco.

As first published on the KNIME Blog.

KDnuggets Home » News » 2021 » Oct » Tutorials, Overviews » What is Clustering and How Does it Work?