This article is the first in a series of articles looking at the different aspects of k-means clustering, beginning with a discussion on centroid initialization.

By Matthew Mayo, KDnuggets on May 13, 2022 in Machine Learning

Simple clustering methods such as k-means may not be as sexy as contemporary neural networks or other recent advanced non-linear classifiers, but they certainly have their utility, and knowing how to correctly approach an unsupervised learning problem is a great skill to have at your disposal.

This is intended to be the first in a series of articles looking at the different aspects of a k-means clustering pipeline. In this first article we will discuss centroid initialization: what it is, what it accomplishes, and some of the different approaches that exist. We will assume familiarity with machine learning, Python programming, and the general idea of clustering.

k-means is a simple, yet often effective, approach to clustering. Traditionally, k data points from a given dataset are randomly chosen as cluster centers, or centroids, and all training instances are plotted and added to the closest cluster. After all instances have been added to clusters, the centroids, representing the mean of the instances of each cluster are re-calculated, with these re-calculated centroids becoming the new centers of their respective clusters.

At this point, all cluster membership is reset, and all instances of the training set are re-plotted and re-added to their closest, possibly re-centered, cluster. This iterative process continues until there is no change to the centroids or their membership, and the clusters are considered settled.

Convergence is achieved once the re-calculated centroids match the previous iteration’s centroids, or are within some preset margin. The measure of distance is generally Euclidean in k-means, which, given 2 points in the form of (x, y), can be represented as:

As k-means clustering aims to converge on an optimal set of cluster centers (centroids) and cluster membership based on distance from these centroids via successive iterations, it is intuitive that the more optimal the positioning of these initial centroids, the fewer iterations of the k-means clustering algorithms will be required for convergence. This suggests that some strategic consideration to the initialization of these initial centroids could prove useful.

Variants of any of these are possible: you could randomly select from anywhere in the data space, as opposed to just the space which contains existing data points; you could attempt to find the most centrally located data point first, as opposed to a random selection, and proceed with k-means++ from there; you could swap the post-summation mean operation for an alternate in naive sharding.

As we will use Scikit-learn to perform our clustering, let's have a look at its KMeans module, where we can see the following written about available centroid initialization methods:

'random': choose n_clusters observations (rows) at random from data for the initial centroids.

If an ndarray is passed, it should be of shape (n_clusters, n_features) and gives the initial centers.

If a callable is passed, it should take arguments X, n_clusters and a random state and return an initialization.

With this in mind, and since we want to be able to compare and inspect initialized centroids — which we are not able to do with Scikit-learn's implementations — we will use our own implementations of the 3 methods discussed above, namely random centroid initialization, k-means++, and naive sharding. We can then use our implementations independent of Scikit-learn to create our centroids, and pass them in as an ndarray at the time of clustering. We could also use the callable option, as opposed to the ndarray option, and integrate the centroid initialization into the Scikit-learn k-means execution, but that puts us right back to square one with not being able to examine and compare these centroids prior to clustering.

With this file placed in the same directory as where I have started Jupyter notebook, I can proceed as follows, starting with imports.

Clearly we will need some data. We will create a small synthetic set in order to have control over clearly delineating our clusters (see Figure 1). 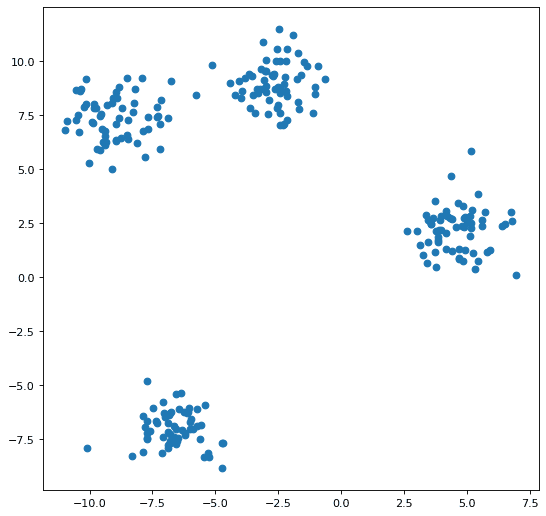 Let's initialize some centroids, using the implementation from above.

As you can see, the sets of initialized centroids differ from each other.

Let's see how our centroids compare to each other, and to the data points, visually. We will call the plotting function below a number of subsequent times for comparison. Figure 2 plots the the 3 sets of centroids created above against the data points. 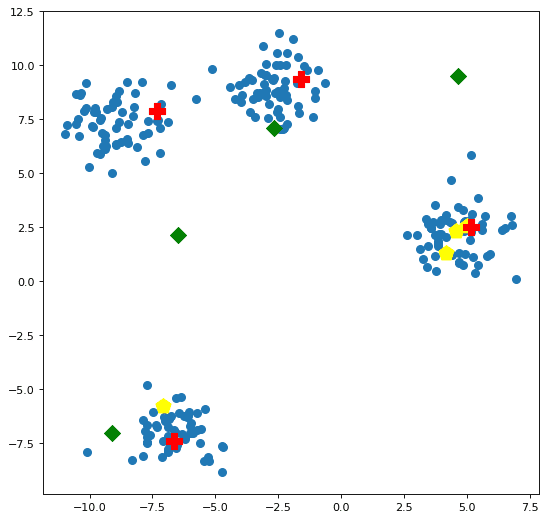 Keep in mind that we created a 2 dimensional data space, so the visualization of these centroids is accurate; we aren't stripping away a number of dimensions and artificially plotting the data in a stripped-down space which may be problematic. This means the comparison of the centroids in this case is as accurate as is possible. 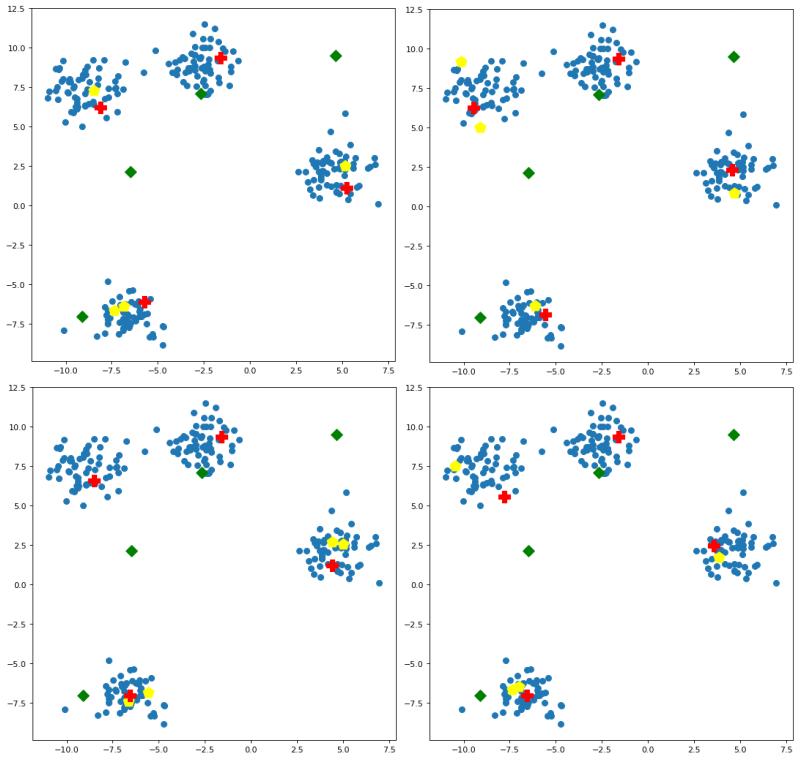 This leads us to some questions, which relate directly to the next steps in clustering:

We will start searching out the answers to these next time.