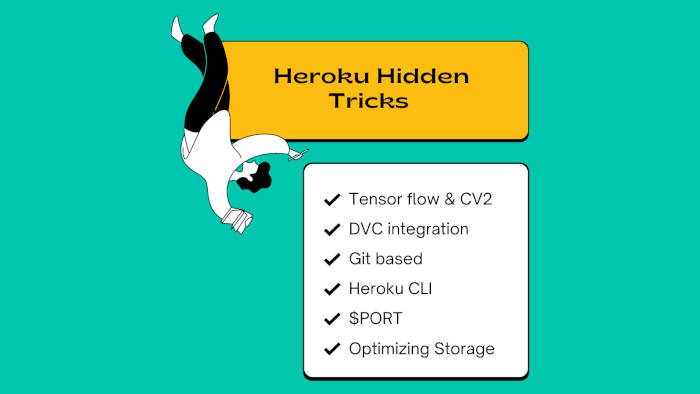 Heroku Cloud is famous among web developers and machine learning enthusiasts. The platform provides easy ways to deploy and maintain the web application, but if you are not familiar with deploying deep learning applications, you might struggle with storage and dependence issues. This guide will make your deployment process smoother so that you can focus on creating amazing web applications. We will be learning about DVC integration, Git & CLI-based deployment, error code H10, playing around with Python packages, and optimizing storage.

The Streamlit app can be deployed with git, GitHub integration, or using Docker. The git-based approach is by far a faster and easier way to deploy any data app on Heroku server.

The Streamlit app can be deployed using:

For this to work, you need:

CLI-based deployment is basic and easy to learn.

If you are running the app with streamlit run app.py it will produce an error code H10 which means $PORT assigned by the server was not used by the Streamlit app.

This part took me 2 days to debug as Heroku cloud comes with a 500MB limitation, and the new TensorFlow package is 489.6MB. To avoid dependencies and storage issues, we need to make changes in the requirements.txt file:

There are a few steps required for successfully pulling data from the DVC server.

After that, commit and push your code to Heroku server. Upon successful deployment, the app will automatically pull the data from DVC server.

There are multiple ways to optimize storage, and the most common is to use Docker. By using the docker method, you can bypass the 500MB limit, and you also have the freedom to install any third-party integration or packages. To learn more about how to use docker, check out this guide.

The initial slug size was 850MB, but with storage and package optimizations, the final slug size was reduced to 400MB. We have solved error code H10 with a simple command and added opencv-python-headless package to solve dependency issues. This guide was created to overcome some of the common problems faced by beginners on Heroku servers.

The Docker-based deployment can solve a lot of storage problems, but it comes with complexity and a slow deployment process. You can use heroku container:push web, but before that, you need to build the docker, test it, and resolve all the issues locally before you can push it. This method is preferred by advanced Heroku users.

The next challenge is to deploy your web application with webhook. This will allow us to automate the entire machine learning ecosystem from any platform. The automation process will involve creating a simple Flask web server that will run shell commands.