A simple overview of using an often-misunderstood yet useful function in Python: Numpy's argmax(). Read the what, the how, and the why of argmax() here. 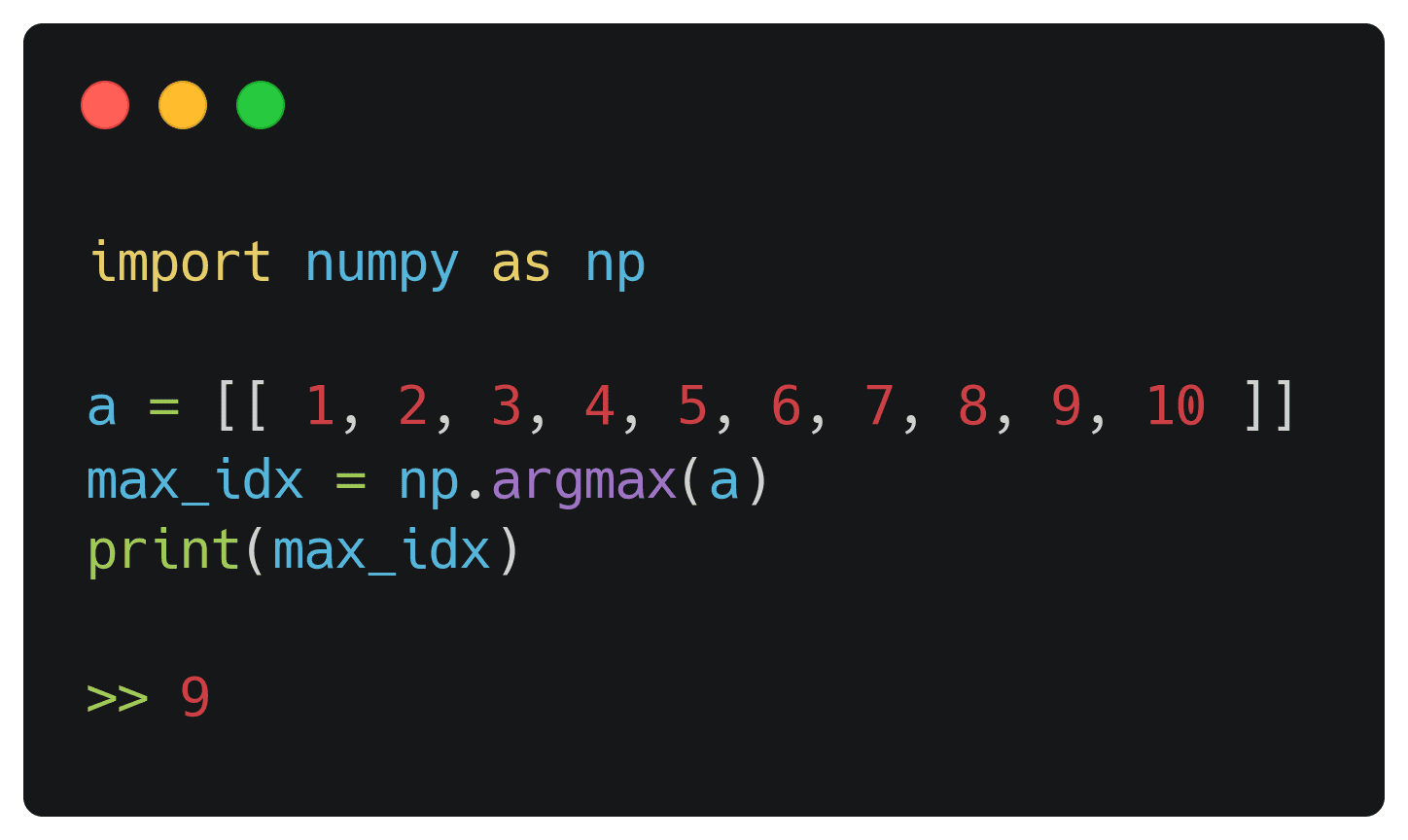 When approaching a question, framing it with the proper 'W' can mean the difference between getting the answer you are looking for and absolute confusion.

These questions make very little sense as they are posed, and so the answer one is looking for might not come as quickly as hoped.

Similar confusion can arise when one is writing Python code and uses Numpy's argmax() function. argmax is useful when working with matrices, or multidimensional arrays, of any number of dimensions, and searching for the maximum value. However, and rather importantly, argmax returns the indices of the maximum values along an axis, as opposed to the maximum values themselves.

argmax will tell you the where, not the what. This is a critical point that is often misunderstood by those using the Numpy library, and one which can lead to frustration.

Let's have a look at how Numpy's argmax is designed to work.

According to the Numpy documentation, argmax "[r]eturns the indices of the maximum values along an axis."

Its important parameters include the input array from which to locate the maximum values of a particular axis and return its position, along with a particular axis (which is optional). One can additionally optionally pass an output array, and a boolean value to retain any reduced axes in the results. Regarding the optional axis argument, if none is specified, the returned index is into the flattened input array.

argmax returns an array of indices into the original array, the dimensions of which depend on the function's input.

According to Jason Brownlee in an article on Machine Learning Mastery:

Argmax is most commonly used in machine learning for finding the class with the largest predicted probability.

The most common situation for using argmax that you will encounter in applied machine learning is in finding the index of an array that results in the largest value.

If we consider the probabilities of predictions of class membership, the argmax function can determine the index position into an array which contains the max value and, hence, the highest probability prediction. This is clearly useful for machine learning.

Let's have a look at how argmax works in practice.

Let's have a look at argmax in action.

After importing Numpy in the usual manner, we create a single dimension array and pass it to argmax. Look at the array and code to figure out what you think the output should be.

Does this output match what you expected?

If you recall that argmax is returning an index as oppposed to a value, and that indexing begins at 0, we see that we have been returned index 9 — which is actually the tenth position — which holds the value '10', the max value in the array.

Let's have a look at how argmax works with an array of multiple dimensions.

Now we have a 2-dimensional array. We did not pass an axis parameter, and so the default behavior of argmax is to flatten the multidimensional array into a single dimension, and return the index of the maximum value into this flattened array.

As such, the result is is the same as the single dimension array in the previous example, and it should now be apparent as to why.

But what if we specify an axis?

First, recall that axis 0 refers to rows while axis 1 refers to columns. Let's see what happens when we pass axis=0 to argmax.

What's this all about?

We specified axis=0, and so argmax will be returning the maximum value along the rows of the multidimensional array.

What is the maximum value? As established previously, for this array it is '10'.

Where is the maximum value? It is in the last column of the second row.

Since we have already specified that we are interested in knowing what row it is in (axis=0), for each column in the array Numpy is reporting the row in which this maximum value appears. Recalling that indexing begins with 0, we can see that, for each of the columns in this array, the maximum value occurs in the row with the index of 1, or the second row. Looking to our code to see where the value '10' is located, it appears as though argmax is correct.

What would you expect the output to be if we instead specified axis=1? I will eave this as an exercise for the reader.

In this post we learned what argmax is, why we would use it, and have covered several examples using Numpy's argmax function.

You should now know how argmax works.