The Difference Between L1 and L2 Regularization

Suppose we have a dataset with

observations as shown below:

A basic regression model can be represented as follows:

is the feature matrix, and

In L2 regularization, the regression coefficients are obtained by minimizing the L2 loss function, given as:

In L1 regularization, the regression coefficients are obtained by minimizing the L1 loss function, given as:

L1 regularization is implemented in Python as:

The plot below is a plot of the R2 score and the L1 norm as a function of the regularization parameter. 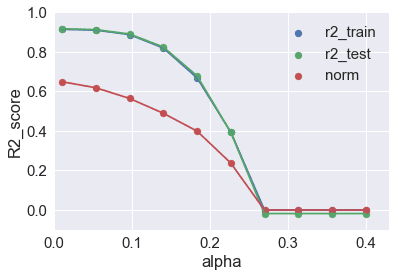