Python is the most popular general-purpose language and you can learn it for free.

By Nahla Davies, KDnuggets on November 17, 2022 in Python 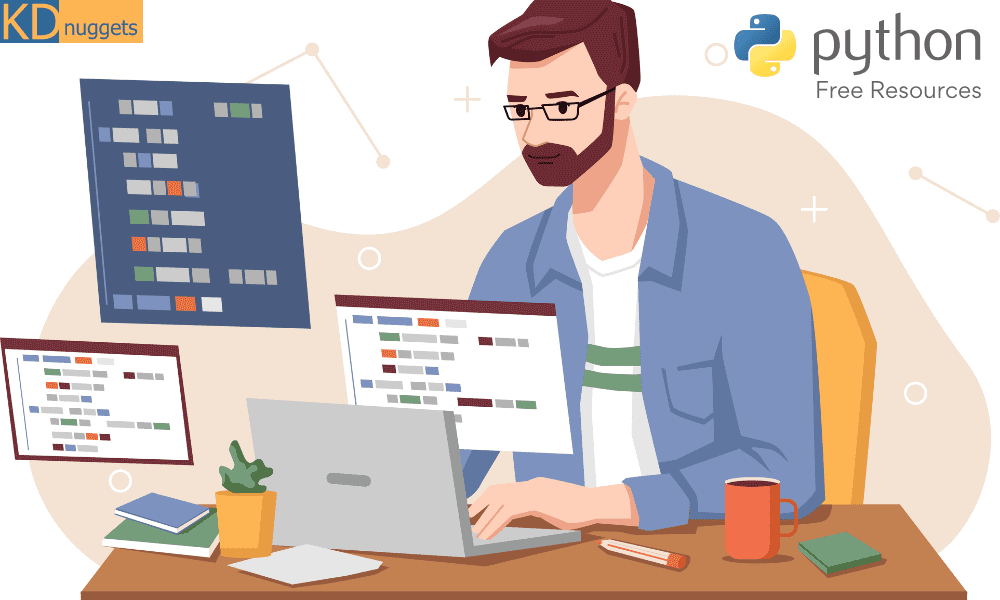 Python is considered the easiest high-level, general-purpose programming language to learn, allowing you to build portable, cross-platform applications. This, along with its dynamic garbage collection and simple, concise code, makes it ideal for applications related to artificial intelligence.

But how do you go from writing a simple “Hello World” app to using Python for more sophisticated projects? The following guide will introduce nine resources that can help you master Python.

InventWithPython.com is a website created and maintained by Al Sweigart, a professional software developer who has dedicated much of his time to teaching people how to code. Invent With Python provides you with a host of resources (mostly in an eBook form) to help you start coding with Python. However, it’s the website’s set of Gently Explained Python Programming Exercises you should be most interested in.

The best way to master a programming language is not through sedulous study but through action; you must work with the programming language to truly learn it. Invent With Python’s Gently Explained Python Programming Exercises are intended for beginner and intermediate-level programmers. It features concise and simple explanations of each problem in the exercise to help nurture you into the next level of Python proficiency.

As any craftsman would vouch, you’re only as good as the tools you use. While you can use Python’s default IDE (IDLE) or a text editor like VS code, a fully-featured IDE like Visual Studio 2022 is more conducive to building advanced Python applications. Microsoft Visual Studio is regarded as one of the best (if not the greatest) IDEs. You can easily manage your dependencies and libraries using its pip and Pypl built-in support.

According to statistics, it takes about 30 days to deploy a simple machine learning protocol. With Visual Studio’s arsenal of code-editing tools, this time could be cut down considerably. Visual Studio features tooltips, templates, autocompletes, and code snippets, making it easier to work with and manage your data sources.

Visual Studio is ideal for polyglot programmers who work with different programming languages. All you have to do is download the necessary workloads for each language. Visual Studio’s Community Edition is free and should be enough for most programmers. However, if you want access to even more features, you can always download the Professional or Enterprise edition.

Not to shamelessly plug our site, but KDNuggets is one of the best resources to help you further your skills as a Python developer. Whether it’s putting you in touch with helpful courses to get you certified or cheat sheets to make learning easier, KDNuggets could be one of the most useful weapons in your toolbox.

We haven’t even discussed the blog yet. It features machine learning, coding, data science, and of course, Python content written and edited by experienced industry professionals.

KDNuggets is suitable for programmers and data scientists at all levels. Whether you want to make your Python code run faster, master machine learning with Python, or prepare for your interview, KDNuggets features content for all these scenarios.

YouTube is arguably one of the best places to learn how to code. Channels like Pretty Printed, The Underdog, and sentDex (bonus free resources) teach you not just about coding but how to cope as a developer.

YouTube isn’t the only video-sharing website that hosts free Python-related media, though. Programming-related video content can also be found on Dailymotion, Vimeo, Facebook, etc. Some websites and services prefer to self-host their media, so keeping track of the best content can be difficult.

This is where tools such as PyVideo come in. It finds and indexes all the latest videos related to Python events across the internet. You can view content according to specific events, languages, tags, speakers, etc.

PyVideo allows you to learn about the latest advancements in Python from some of the industry’s most revered contributors and programmers. It may eventually encourage you to attend a few Python conventions and events to experience it all live.

Awesome Python is a carefully curated list of some of the best Python frameworks, libraries, and other resources hosted on GitHub. From libraries built for audio manipulation to cryptography, it has nearly every package to help you with your next Python project.

Algorithms and data structures drive data science. Even as a self-taught developer, you must know basic algorithms (and a bit of math). Like Awesome Python, TheAlgorithms is a GitHub open-source repository containing algorithms you can plug into your project.

You should note that TheAlgorithms doesn’t just contain a library of Python algorithms but also algorithms for Java, JavaScript, Julia, R, etc.

If you’re a beginner looking for an immersive Python learning experience that can accommodate your learning style, look no further than Google’s Python Class. Over the past decade, Google has invested considerable time and effort into educating people about computer science. Google’s Python Class features lecture and tutorial videos, written materials, and many exercises and tests. It’s catered to people with very little-to-no coding experience, which makes it extremely accessible.

Programiz is perfect for those looking for an alternative to Google’s Python class. It offers a host of Python (and other programming languages) learning tools. Much like Google, the website takes a multi-pronged approach to teach you how to code.

Each course is organized like an interactive textbook. Each chapter is accompanied by a video, various written instructions, examples, and some code you can run yourself using the Programiz online compiler. However, if you are unsatisfied with the course’s structure, Programiz provides a set of tabs that allow you to view the examples, references, and compilers on your own. Many find the compiler the most useful as you can quickly run and test code from it.

While Programiz is free, it does offer a pro version with even more features, including a professional certificate at the end of the course.

The best thing about audio-based media is that you can consume it while doing something else (i.e., exercising, driving, doing household chores, etc.). There are a lot of great programming and data science-related podcasts that Python beginners can benefit from. Some of the noteworthy ones include:

A decade ago, we looked to Java to take us to the next level. Now, Python has surpassed many programming languages and become the most popular one in the world.

Python isn’t a new language; it’s been around since the early 90s, conscientiously making improvements while garnering developer support. But Python wouldn’t be where it is if it wasn’t for the online community of Python developers and enthusiasts. Thanks to them, we have the resources to learn and master Python. Once you’ve mastered Python, too, don’t forget to give back to the community.