When is the Birthdate of the *Predictive Analytics* term? I investigate when this term first appeared.

My attention was caught by a recent post by Jaap Vink on LinkedIn:

The Birthdate of "Predictive Analytics" is January 15, 2003 , when Matt Cutler introduced the phrase to SPSS staff as part of a repositioning in the market. In 2003 the SPSS Senior Management & Marketing under the leadership of Jack Noonan, Dyke Hensen & Matt Cutler coined the phrase "Predictive Analytics" to explain to the market and to the analysts how SPSS differed from BI companies like BO and Cognos.

Of course, similar terms to "Predictive Analytics" have been used earlier. See my presentation Analytics and Data Mining Industry Overview, where I trace the rise and fall in popularity of related terms of Statistics, Analytics, Data Mining, Knowledge Discovery, Business Analytics, Data Science, and Big Data.

I decided to investigate this further. Google Trends is a great tool, but unfortunately it only has data starting from 2004.

Google Trends shows that searches for "Predictive Analytics" started only in October 2005.

For earlier data we can use Google Ngrams. Here are Ngrams search results for Predictive Analytics, from 1970 to 2008 (Google Ngrams data currently ends in 2008).

Here are some early mentions of "Predictive Analytics".

CRM giant Siebel, based in San Mateo, Calif., plans to announce within the next few months adapters that link its CRM applications to business-intelligence products from companies such as SAS and SPSS ro provide predictive analytics. 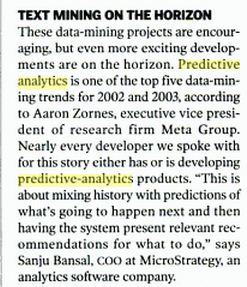 What is the earliest mention of Predictive Analytics you know of?