How IBM Watson is Taking on The World

We have made tremendous progress in the field of data analysis and on the other, our technology is getting smart. IBM has taken a solid stride in the direction of Artificial Intelligence by unveiling its supercomputer IBM Watson, learn what it can do, its adopters and what it holds for the future.

Artificial Intelligence (AI) has intrigued us for decades and with each passing year, we are getting closer than ever to getting that one machine that can interact like humans. On one hand, we have made tremendous progress in the field of data analysis and on the other, our technology is getting smart enough to recognize our questions and respond in the language in which we ask questions.

Artificial Intelligence is a complex field which requires unprecedented coordination between analytics, machine learning, neural networks, speech recognition and Big Data – to name a few. Modern smartphone operating systems come loaded with speech based virtual assistants that demonstrate AI at an elementary stage by supporting voice search and talking back the results to us in mechanized English. While that seems good enough for the time being, there is still a lot of work to be done.

IBM has always been at the forefront of innovation. It has taken a solid stride in the direction of Artificial Intelligence by unveiling its supercomputer IBM Watson (named after IBM founder Thomas J. Watson).

What is IBM Watson?

It is a “Question Answering (QA)” machine (occupying space that is sufficient to house 10 refrigerators). IBM Watson has the ability to scan through huge data volumes to “learn” about the subject and then interpret and answer questions just as humans would. It aims to replicate (or even surpass) an intelligent human being’s ability to understand questions and provide answers.

For those who are into numbers, IBM Watson has the processing power of 80 teraflops, i.e. trillion floating point operations per second. To be able to understand, analyze and answer questions like a high functioning human brain, Watson digs through over 200 million pages of information spread across 90 servers. This data is then run through six million logic rules to come up with relevant answers. 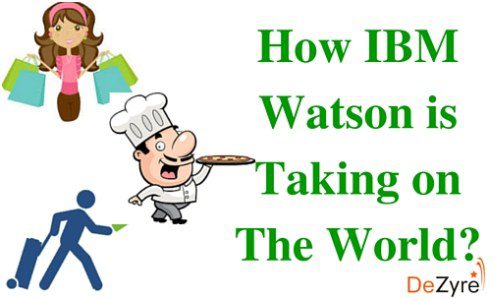 What separates IBM Watson from a search engine?

Search engines often spit out mechanical responses to questions. They don’t have the ability to interpret the order in which words appear in a sentence. They look out for the searched phrase and provide answers without considering the “context” in which that phrase appears. What this means is once Watson is properly trained, putting queries to it would be like talking to an actual human being that has the cognizance to respond in the context rather than mechanically showing results.

It was in 2011 when Watson proved its claims of cognitive computing by competing on Jeopardy! against former winners Brad Rutter and Ken Jennings. It ended up winning the $1 million first prize. Through this competition, the research team led by principal investigator David Ferrucci was able to establish the changing face of Artificial Intelligence. About four years later, Watson’s computing power has been effectively channeled by various sectors of industry to solve real life problems. In this section we list out the sectors that have successfully employed IBM Watson’s cognitive processing capabilities.

U.S. Bureau of Labor Statistics states that about 155,000 military members transition to civilian life each year. During the process, they have a number of questions related to veteran’s compensation benefits, Post-9/11 GI Bill, etc. Relevant information is scattered across hundreds of thousands of document pages. IBM Watson has consumed the knowledge that is documented in over 3,000 documents on topics specifically related to military transitions, which empowers it to satisfactorily answer the queries of military members. As a knowledge base of 3000+ documents would require hundreds of human beings to read through and then organize their observations, before framing the answers, the cost saving achieved by IBM Watson can very well be imagined.

Financial sector has huge collection of specific numbers and processing them correctly to generate the best financial planning advice is critical to business success. More than 400 financial planners of ANZ Global Wealth (the private banking arm of Australia and New Zealand Global Banking Group) use IBM Watson Engagement Advisor to help them improve the financial advice process. It aims to reduce the times it takes customers to receive an advice statement from several days to just one session.

The University of Texas, MD Anderson Cancer Center has on-boarded IBM Watson in its mission to fight cancer. On the prescription side, Oncology Expert Advisor is able to channel Watson’s cognitive computing power to integrate the vast knowledge base of MD Anderson’s researchers. On the other hand, it plays a key role in collecting and analyzing huge amount of unstructured data pertaining to patients’ medical history. Once these two are linked, clinicians get valuable information which would have either taken them long time to gather or might have gotten skipped.

What does the future hold for IBM Watson?

As mentioned, Watson’s application spans many industries. If your business requires consuming large amount of data, learning from it and producing advice beyond number crunching, here is how you can drastically reduce the cycle time for the entire process:

There is no dearth of websites that help you discover the “best price” for your travel tickets. In a competition to be the “fastest” online portal/app to get you this information, businesses often forget the human aspect of travel, which is to create experience for a lifetime. Watson is capable of consuming travel related documentation from around the world, analyze it and get ready with specific answers to questions like, “Where do I go for a romantic beach vacation with my wife in April?” While answering this question, Watson takes into account the fact that all beach destinations are not romantic and the have different “best months to travel”.  A customer would not have the time to scan thousands of reviews and then make up his mind. Imagine the efficiency a travel website could attain with Watson in this situation, when the query gets answered in plain English in a matter of seconds!

Imagine walking into a shop for buying stuff related to camping. What we usually do is to look up the internet, ask friends and prepare a list of goods we would need and then buy them. What if there was a supercomputer you could simply ask all this and it would return you a comprehensive list with additional information about weather, best time and places to camp at and information about other things to do in the neighborhood? IBM Watson’s development platform is being used by Fluid Inc. to disrupt the buying experience of shoppers by doing something very similar.

IBM Watson to make Cooking, a Master Chef experience for you.

Watson is capable of learning anything and it is not restricted to hypothesis, events and technology. Its creativity can be harnessed in creating novel recipes. As would be the case in any other application, it needs to be trained in cooking. Once a large enough knowledge base has been built, it can be called upon at any time to deliver recipes suited to the user’s needs. Once sufficient amount of training has been imparted, a user can ask Watson

to suggest an Italian, vegetarian dish which is cooked in a particular manner (roasted, boiled, air fried, to name a few) and it would walk him through the possible ingredients, duration of cooking and proportions in no time.These are just a few applications from our daily lives which would make our life simpler and better. There is no end to what Watson’s computing power can achieve in fields of agriculture, fraud detection, risk determination, entertainment and even space exploration. So the next time you hear someone talking to a machine and getting an accurate, creative response in a remarkably similar human tone, you might be around one of the applications using IBM Watson.