This tutorial will explain the steps required to package your Python projects, distribute them in distribution formats using steptools, upload them into the Python Package Index (PyPI) repository using twine, and finally installation using Python installers such as pip and conda.

5. Preparing the Package and its Files (__init__.py and setup.py)

There is a root directory holding all files and directories of the package. Inside that root directory, there is another directory named “printmsg” that holds the actual module. Such module is what holds the Python code of our project to be imported later after being installed.

For our simple example, the minimal files required will be used which are __init__.py and setup.py in addition to the actual project file print_msg_file.py. Next is to prepare these files.

The first file to prepare is the __init__.py file. The main use of this file is to allow Python treat the directory as a package. When the package has the __init__.py file, the package can be imported as a regular library after being installed by either installer. Just its existence is enough even if empty. You might wonder why it is now required despite being not required when the library installed manually in step 3. The answer is that the installer will not know that the directory is a package without the __init__.py file. That is why it will not fetch the library Python files (print_msg_file.py).

After installing the library in Windows while using the __init__.py file, there are two folders generated in the site-packages directory (“printmsg-1.4.dist-info” and “printmsg”) as in figure 8. The “printmsg” folder is what holds the Python files to be imported later. If the __init__.py file is not used, then the “printmsg” folder will not be found. As a result, it will become impossible to use the Python code because it will missing. 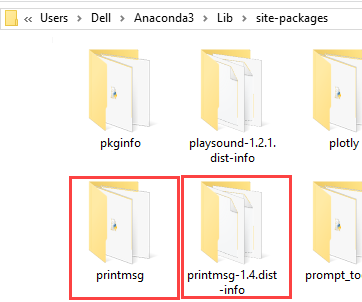 Besides telling Python that the directory is a Python package, the __init__.py file is the first file to be loaded when the module is imported and thus can do initializations.

After marking the directory as a package using the __init__.py file, next is to add more details about the package. This is why the setup.py file is used. The setup.py script is what gives details about your project such as what dependencies required to make your project running. This script uses the setuptools distribution tool for building the distribution files to be uploaded later to PyPI. Here is the content of the setup.py file in order to distribute the project.

That file contains a number of fields that holds details such as name of the package, version, author, author_email, short description to appear on PyPI, and others. There are many other fields that could be used based on your needs.

Note that the package name is used currently in two positions. One time for the module directory and another here in the setup.py file. Is they must be equivalent? Answer is NO. Each one has its own job but there is no dependency between them. The name used in the setup.py file is the name to be used when installing the package. The name of the directory is the name used to import the module. If they are different, then the package will be installed by a name and imported by a different name. There should be consistency between these two names to avoid confusing package users.

After preparing the package, we are ready to distribute it. Before actual distribution, we should make sure that the dependencies required are already existing. To distribute the project, setuptools and wheel projects are required to be installed. wheel project is used to generate wheel distribution format. Make sure they are installed and updated as in figure 9 according to this command: 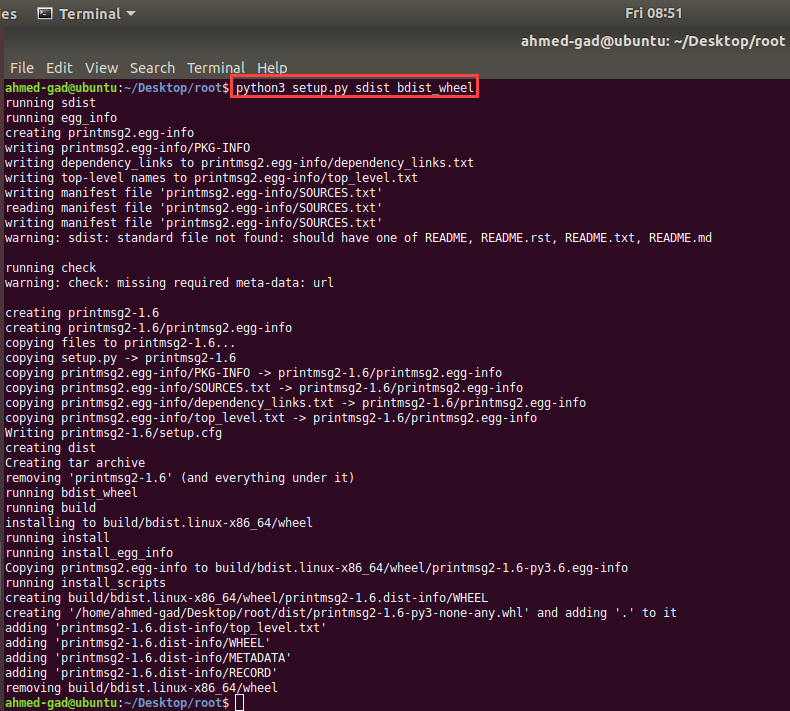 After preparing the distribution files, next is to upload them to PyPI.

There are two Python package repositories to use. One of them for testing and experimentation which is Test PyPI (test.pypi.org) and another for real index which is PyPI (pypi.org). Their use is similar but we can start using Test PyPI.

Before uploading to Test PyPI, you should register yourself to get a username and password for uploading your packages. Just register by your active e-mail address where a confirmation will be received to activate your account. Registration link is https://test.pypi.org/account/register/.

After registration is complete, we can use twine utility for uploading package distributions to Test PyPI. You should make sure it is installed and upgraded according to the following command:

Once it is installed, you can upload packages to Test PyPI. Open the terminal and make sure you are currently on the root of the package and issue the following command:

You will be asked to enter your Test PyPI username and password. Once you are verified, upload will start. The result is shown in figure 13.

After uploading the files successfully, you can open your profile at Test PyPI to see your uploaded projects. Figure 14 shows that the printmsg project is successfully become live. Note that the value used for the description field inside setup.py file is now appearing on the repository.

Reaching this point, you have successfully packaged and distributed your Python project. It is available now for download by any user connected to the Internet. To install the project using pip, just issue the following command. The result is shown in figure 15.

9. Importing and Using the Installed Package

After installing the project, it can be imported. The following two lines entered previously can be now executed. The difference is using the package installed from Test PyPI not manually installed. The result is identical to what shown in figure 4.

10. Using PyPI rather than Test PyPI

The first change is not using the --repository-url option with twine because PyPI is the default repository for uploading packages. So, the command required will be as follows:

Similarly, the second change is omitting the --index-url option with pip for the same reason (PyPI is the default repository when installing a package).