This tutorial will explain the steps required to package your Python projects, distribute them in distribution formats using steptools, upload them into the Python Package Index (PyPI) repository using twine, and finally installation using Python installers such as pip and conda. 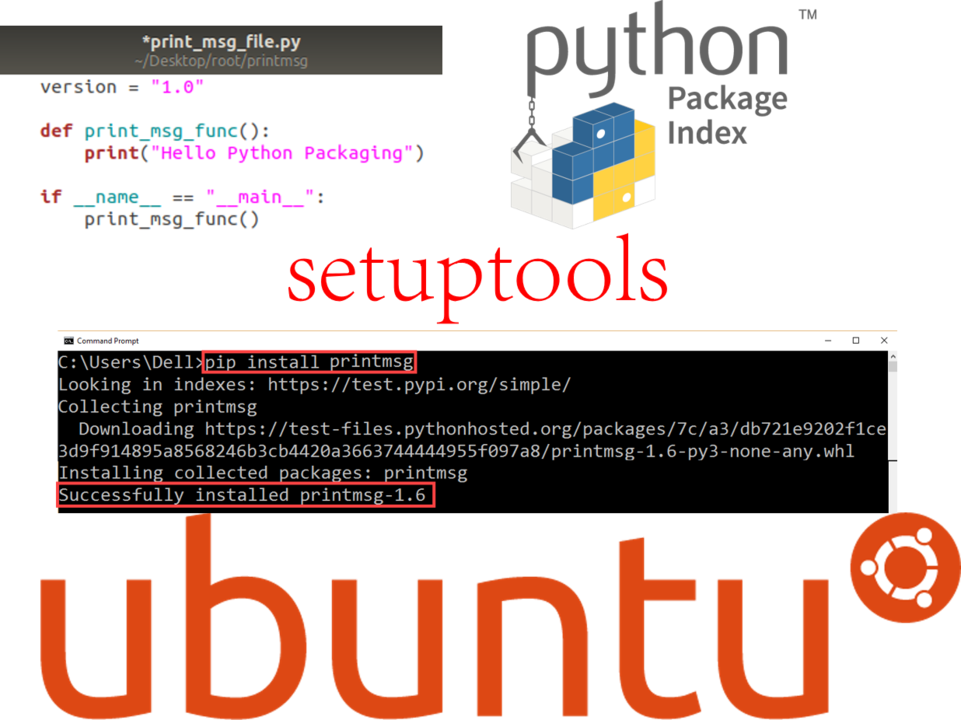 You might worked with several languages such as Java, C++, and Python and created a number of projects but unfortunately these projects are buried and no one knows about. Why not making these projects alive by making them available online? This tutorial will explain the steps required to package your Python projects, distribute them in distribution formats using steptools, upload them into the Python Package Index (PyPI) repository using twine, and finally installation using Python installers such as pip and conda.

The platform used in this tutorial is Linux Ubuntu 18.04 with Python 3.6.5. But you can still use other platforms such as Windows with little or no difference in the commands used.

This tutorial has the following steps:

9. Importing and Using the Installed Package.

10. Using PyPI rather than Test PyPI.

This project will have just a single level containing a single Python file. The project structure is as follows:

Here is the implementation inside the “print_msg_file.py” file. The “print_msg_func”function prints a hello message when called. Due to the if statement, the file will automatically call the function once executed directly as the main program. But it will not if that file is imported into another file.

Next is to execute that file to know that everything is running well such as Python being installed properly. A Python file is to be executed from either the Linux terminal or Windows Command Prompt by issuing the python command followed by the location of the file. Figure 1 shows how to run the Python file using both Windows and Ubuntu.

The CMD/terminal are opened in the “printmsg” directory and its contents are displayed to ensure the target file “print_msg_file.py” is already existing. Then the python command is issued to run the file.

After making sure everything is working, it is possible to import that project into another Python file in order to be able to call its content. If a file to be imported into another, the legacy way for doing this is to create another file in the same directory of that file. For example, another Python file named “second_file.py” is to import the project and call its function as follows:

At first, the project is imported as in line 1. Then it is used to call its function in line 2. After opening the terminal and setting its current directory to the printmsg folder, the new file “inside_project.py” can be executed as in figure 2. The function got called successfully.

Because the imported module is in the same directory of the script it is called from, the process is straightforward. Just type the name of the module in an import statement. There is an important question. What if the script calling the file is in a different directory than the module it would like to import? Let us try to create another Python file not located in the same directory of the imported module and try to import the module again. The file is named “outside_project.py” which is located into the desktop. In other words, that file is located one level up to the module. It has the same code used in the previous file “inside_project.py” After running this file from the terminal, the result is shown in figure 3.

The result of executing the “outside_project.py” file is shown in figure 4.

But appending the folder name in the path from the file to the module it imports is tiresome specially if the file is away from the module in more than one levels. To solve this issue, let us have a brief overview about how Python interpreter locates imported libraries.

When Python interpreter encounters an import statement, it searches in some of its directories for that imported library. If it is not found in any of those directories, then it will raise an error as in figure 3.

There are multiple sources of such paths that is searched for a given library. For example, paths can be inside the PYTHONHOME or PYTHONPATH environment variables, current script directory, and the site-packages directory. The list of all directories that Python searches in are listed in the path property of the sys built-in module. It can be printed as follows:

The sys.path list is printed using the terminal and result is shown in figure 5.

In our example, the module is not located in any of the directories listed in sys.path and this is why an exception is thrown. We can fix that by moving the library into one of these paths. The directory that will be used is the site-packages directory. The reason is that the installed libraries using pip or conda are added to that directory. Let us see how to add our project into that directory. 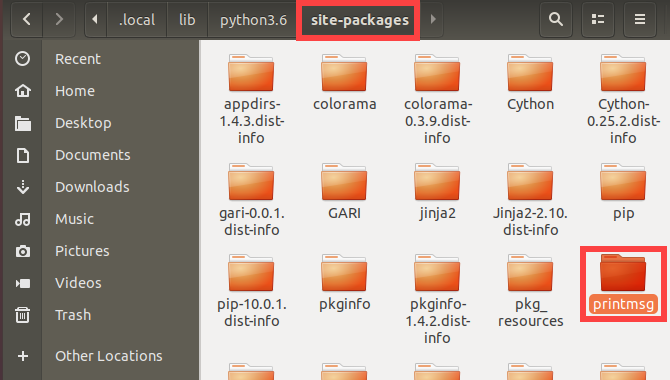 Up to this point, in order to import the project successfully it should be copied manually inside the site-packages directory. Before doing that, the project should be transferred to the machine by anyway such as being downloaded from any file hosting server. But all of work is manual. Some users will find such work is tiresome to do for every library they are to install. As a result, there is alternative way for installing libraries.

Some installers are available to receive the library name and they take care of downloading and installing it automatically. But how to make our own libraries accessible by these installers? These installers searches for the libraries inside software repositories such as Python Package Index (PyPI). Once found, they download and install it automatically. So, rather than asking how to make our own libraries accessible by Python installers, the question should now be how to upload our own libraries to such repositories? This is because by uploading these libraries to such repositories, they will implicitly be accessible by the Python installers. Such software repositories accept the libraries in distribution formats such as Wheel built distribution. So, our question now should be how to prepare our project into Wheel distribution format? In order to generate the Wheel distribution format, there are a number of files to be packaged together. These files include the actual project Python files, any supplemental files required by those files, and also some helper files to give some sort of details about your project. So, the sequence to be followed is to prepare the package files, generate the distribution files, and upload such files to the Python package repository (PyPI). These points will be covered in the next sections.