AI represents a step change in humanity’s ability to rise to its greatest challenges. We explore three areas in which AI can contribute to the UN’s Global Goals - and why we could fall short.

By Marshall Lincoln and Keyur Patel, cofounders of the Lucid Analytics Project

In 2015, all 193 member countries of the United Nations ratified the 2030 “Sustainable Development Goals” (SDG): a call to action to “end poverty, protect the planet and ensure that all people enjoy peace and prosperity.” The 17 goals – shown in the chart below – are measured against 169 targets, set on a purposefully aggressive timeline. The first of these targets, for example, is: “by 2030, [to] eradicate extreme poverty for all people everywhere, currently measured as people living on less than $1.25 a day”.

The UN emphasizes that Science, Technology and Innovation (STI) will be critical in the pursuit of these ambitious targets. Rapid advances in technologies which have only really emerged in the past decade – such as the internet of things (IoT), blockchain, and advanced network connectivity – have exciting SDG applications. 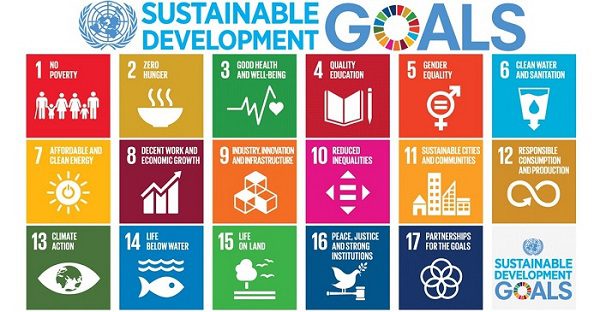 No innovation is expected to be more pervasive and transformative, however, than artificial intelligence (AI) and machine learning (ML). A recent study by the McKinsey Global Institute found that AI could add around 16 per cent to global output by 2030 – or about $13 trillion. McKinsey calculates that the annual increase in productivity growth it engenders could substantially surpass the impact of earlier technologies that have fundamentally transformed our world – including the steam engine, computers, and broadband internet. 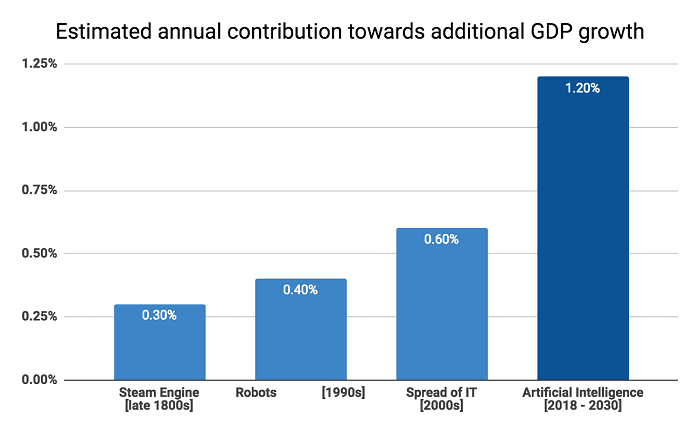 AI/ML is not only revolutionary in its own right, but also increasingly central to the foundation upon which the next generation of technologies are being built. But the pace and scale of the change it will bring about also creates risks that humanity must take very seriously.

Our research has led us to conclude that AI/ML will directly contribute to at least 12 of the 17 SDGs – likely more than any other emerging technology. In this piece, we explore potential use cases in three areas which are central to the Global Goals: financial inclusion, healthcare and disaster relief, and transportation.

Access to basic financial services – including tools to store savings, make and receive payments, and obtain credit and insurance – are often a prerequisite to alleviating poverty. Around 2 billion people around the world have limited or no access to these services.

AI/ML is increasingly helping financial institutions create business models to serve the unbanked. For example, one of the biggest barriers to issuing loans is that many individuals and micro businesses have no formal credit history. Start-ups are increasingly running ML algorithms on non-traditional sources of data to establish their creditworthiness – from shopkeepers’ orders and payments history to psychometric testing. Analysis of data on crop yields and climate patterns can be used to help farmers use their land more effectively – reducing risks for lenders and insurance providers.

AI/ML is also being used to help service providers keep their costs down in markets where revenue per customer is often very small. These include automated personal finance management, customer service chat-bots, and fraud detection mechanisms.

The inequality between urban and rural healthcare services is an urgent problem in many developing countries.

Rural areas with poor infrastructure often suffer from severe shortages of qualified medical professionals and facilities. Smart phones and portable health devices with biometric sensors bring the tools of a doctor’s office to patients’ homes - or a communal location in a village center for shared use. AI then automates much of the diagnostic and prescriptive work traditionally performed by doctors. This can reduce costs, enable faster and more accurate diagnoses, and ease the burden on overworked healthcare workers.

AI is also being used to get medical supplies where they are needed. A start-up called Zipline, for example, is using AI to schedule and coordinate drones to deliver blood and equipment to rural areas in Rwanda (and soon other countries in Africa) which are difficult to access by road. Doctors order what they need via a text messaging system, and AI handles delivery. This dramatically reduces the time it takes to obtain blood in an emergency and eliminates wastage.

When it comes to disaster relief, predictive models – based on data from news sources, social media, etc. – can help streamline crisis operations and humanitarian assistance. For example, AI-powered real-time predictions about where earthquakes or floods will cause the most damage can help emergency crews decide where to focus their efforts.

Autonomous cars are the tip of the iceberg, in that they are in many ways among the most visible - but least important - implications of AI innovations in the transportation sector. The unprecedented scale of the coming surge in urbanization presents a set of massive problems for AI to solve.  According to the UN, 2.5 billion people will move to cities by 2050 – 93 per cent of them in low and middle income countries – creating staggering logistical challenges.

Public transportation - rather than private vehicles - must be at the heart of any solution. We’ve seen glimpses of how AI can vastly improve the efficiency of urban transportation networks. Metro systems in Hong Kong and Singapore, for example, use data on their millions of riders per day, and the unique journeys they take, to determine the best allocation of trains and their schedules.

Similarly, AI is set to transform the global trucking and shipping industries by automating and optimizing routes. These innovations will reduce fuel consumption and costs, and cut journey times.

Each of these AI/ML applications has the potential to profoundly change the lives of millions or people. They signify a step change in humanity’s ability to rise to its greatest challenges. There are many more applications we don’t have space to discuss here that might have an equally powerful impact.

However, such profound changes create potentially very serious risks if not accompanied by rigorous safeguards. For example, when it comes to policing, predictive analytics are increasingly being used to monitor suspected terrorists, predict hotspot areas where crimes are likely to happen, and efficiently allocate law enforcement resources to deter, prevent, and respond to these crimes as they take place.

But AI could provide autocratic governments with a frightening set of tools to consolidate power over their citizens. AI will be available to police states, as an increasingly effective means of monitoring and consolidating absolute control over what could become an increasingly unfree populace without the resources or sophistication to fight back.

In using AI/ML to advance progress towards the SDGs, it’s critical we take steps to monitor and mitigate the risks that could seriously hinder our ability to achieve them. These include:

Bio: Marshall Lincoln and Keyur Patel are cofounders of the Lucid Analytics Project - an independent research forum, which focuses on the impact of transformative technologies (particularly machine learning and AI), and their ability to advance sustainable human development.