A Quick Guide to Feature Engineering

Feature engineering plays a key role in machine learning, data mining, and data analytics. This article provides a general definition for feature engineering, together with an overview of the major issues, approaches, and challenges of the field.

Feature engineering plays a key role in big data analytics. Machine learning and data mining algorithms cannot work without data. Little can be achieved if there are few features to represent the underlying data objects, and the quality of results of those algorithms largely depends on the quality of the available features. Data often exist in various forms such as image, text, graph, sequence, and time-series. A common way to represent data objects for data analytics is to use feature vectors. Data in raw forms such as those discussed above are not descried by informative features. Even data represented by feature vectors may still be in need of new effective features. Feature engineering is concerned with meeting the needs in generating and selecting an effective feature-vector based representation of data.

It should be emphasized that feature engineering is not just feature selection, and it is more than feature transformation.

Automatic feature construction is a popular approach to feature generation, with Word2vec [7] and DeepLearning based methods [8] being representative methods. We describe each briefly below.

(a) Word2vec is a group of methods that produce numerical feature vectors to represent words. They use shallow, two-layer neural networks to reconstruct linguistic contexts of words. Word2vec takes as its input a large corpus of text and produces a vector representation, typically of several hundred dimensions, for each unique word in the corpus. When words share common contexts, their word vectors are similar to each other. Figure 2 (from [7]) describes two architectures of Word2vec. The CBOW architecture trains a model to predict the current word based on the context described by Bag of Words, and the Skip-gram architecture trains a model to predict surrounding words given the current word. Word2vec has been generalized to image data, graph data and so on. 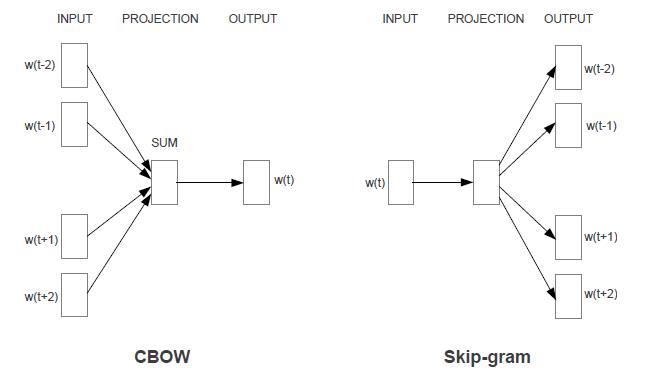 Figure 2: Two Architectures for Word2vec (from [7])

The book contains many useful feature engineering concepts and techniques, which are useful for multiple scenarios: (a) generate features to represent the data when there are no features, (b) generate effective features when (one may be concerned that) existing features are not good/competitive enough, (c) select features when there are too many features, (d) generate and select effective features for specific types of applications, and (e) understand the challenges associated with, and the needed approaches to handle, various data types.

In 2018 Guozhu Dong used the book to teach a well-received graduate level Feature Engineering Course, which was perhaps the first of its kind in the world (based on a search of the web). The course covered fundamental aspects of feature engineering, including feature generation for major dataset types, feature extraction, feature transformation, feature selection for different data analytic tasks, feature analysis and evaluation, and applications.

Bio: Guozhu Dong is a professor at the Department of Computer Science and Engineering and the Knoesis Center at Wright State University.