The 2019 report evaluated 17 vendors (one more than in previous years) and placed them as always in 4 quadrants, based on completeness of vision (vision for short) and ability to execute (ability for short).

Note that Gartner included only vendors with commercially licensable products. Pure open-source platforms like Python and R, even though very popular with Data Scientists and Machine Learning professionals, were not included. 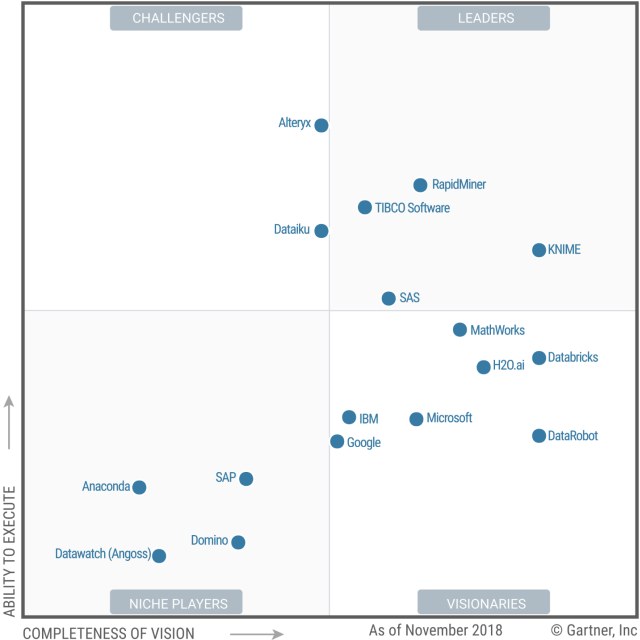 One firm present in 2018 MQ was dropped: Teradata.

As we did previously (see Gainers and Losers in 2018 MQ, Gartner 2017 MQ Gainers and losers), we compared the latest Magic Quadrant with its previous version. Below we examine the changes, gainers, and losers. 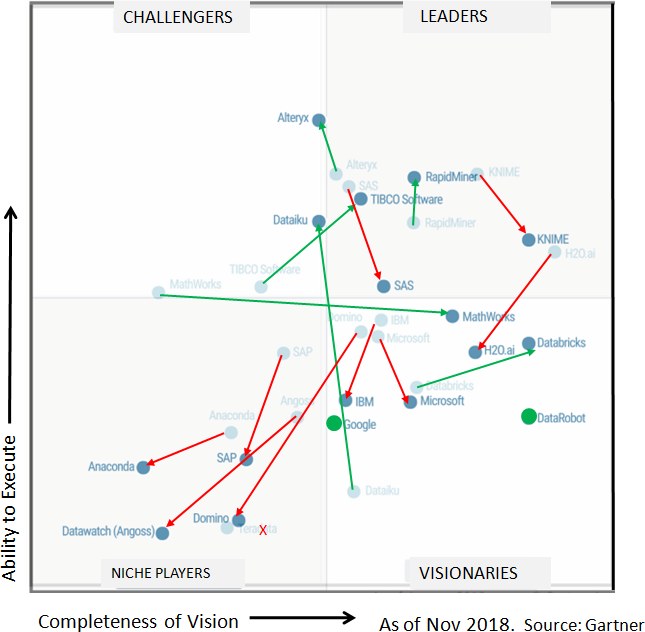 We see that KNIME and RapidMiner remained in strong Leadership position, SAS dropped on ability but still among the leaders, and TIBCO, which acquired several analytics firms recently, joined the leaders for the first time. Alteryx moved to Challengers quadrant and was joined by Dataiku who made a big improvement on ability axis. MathWorks improved significantly on vision and is closing on the Leaders.

We can see longer term trends more clearly if we examine the major firms that appeared in all 3 recent years - see Fig. 3. 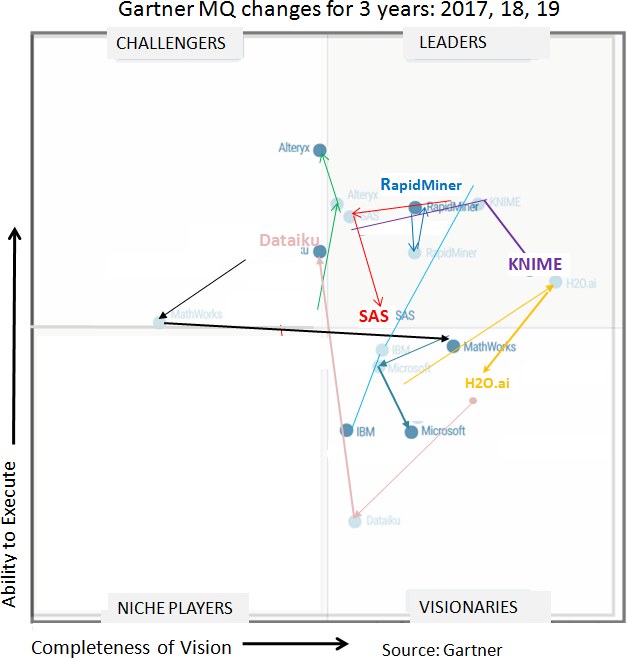 Alteryx improved on ability in both years but remains a challenger.

IBM dropped significantly in both years along both axes and moved from Leaders to Visionaries.

KNIME moved forward in Vision in both years and is a strong leader.

MathWorks dropped on ability in 2018 but improved significantly on vision in 2019.

Microsoft dropped a little on ability in each year.

RapidMiner has remained essentially in the same place in leaders quad.

SAS fell both on vision and then on ability, but remained among leaders.

Rapidminer moved a little up in the Ability. Gartner says

KNIME moved down on Ability axis but forward on Vision. Gartner says

With a wealth of well-rounded functionality, KNIME maintains its reputation for being the market's "Swiss Army knife." Its for-free and open-source KNIME Analytics Platform covers 85% of critical capabilities, and KNIME's vision and roadmap are as good as, or better than, those of most of its competitors.

SAS retains its long-held status as a Leader. Although the company faces threats on multiple fronts from other large vendors, maturing disruptors and open-source solutions, it retains a strong presence in the market.

TIBCO Software joined the leaders and improved both on Ability and Vision axes. Gartner writes:

Alteryx moved from a Leader to a Challenger position, due to its perceived lack of innovation. Gartner writes that nevertheless

Dataiku has made a huge improvement on Ability axis. Gartner writes

Dataiku's appearance in the Challengers quadrant is principally due to its strong execution and strengthening capabilities in relation to scalability.

Databricks remains a Visionary by providing support for the end-to-end analytic life cycle, hybrid cloud environments and accessibility for a wide variety of users.

Google offers a rich ecosystem of AI products and solutions, ranging from hardware (Tensor Processing Unit [TPU]) and crowdsourcing (Kaggle) to world-class ML components for processing unstructured data like images, video and text. Google is also one of the pioneers of automated ML (with Cloud AutoML).

H2O.ai has lost some ground in Ability to Execute relative to other vendors in this Magic Quadrant, largely due to comparatively low scores from reference customers for several critical capabilities.

IBM remains a Visionary, but has lost ground in terms of both Completeness of Vision and Ability to Execute, relative to other vendors.

MathWorks has strengthened the coherence of the MATLAB platform for its engineering-focused audience by seamlessly integrating advanced functionality for the treatment of unconventional data sources (images, video and IoT data).

Microsoft remains a Visionary, having maintained a strong commitment to breadth and ease of open-source technology integration and excellence in relation to deep learning. Azure Machine Learning is not an option for the many data science teams and use cases that require a strictly on-premises product.

You can download the Gartner 2019 Magic Quadrant report for Data Science and Machine Learning platforms from Dataiku, DataRobot, and probably other vendors favorably mentioned in Gartner report.