By Gregory Piatetsky, KDnuggets
Gartner highly anticipated 2016 Magic Quadrant for Advanced Analytics Platforms was published last week. The 2016 report evaluated 16 analytics and data science firms over 10 criteria and placed them in 4 quadrants, based on completeness of vision and ability to execute.


Unlike its cousin, Gartner MQ on BI and Analytics platforms, this report focuses on firms that not only offer dashboards and visualization but provide predictive analytics tools that can be used for building solutions across industries. 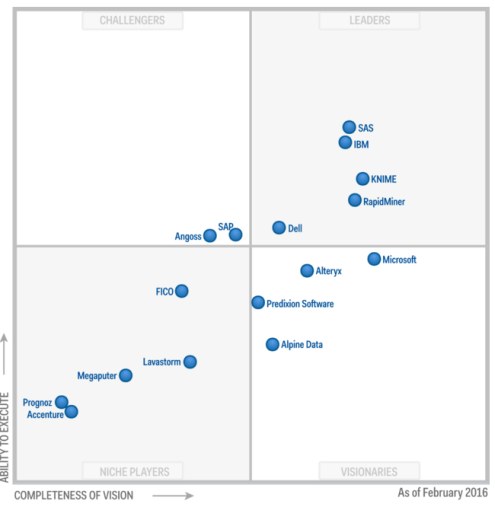 Firms covered:
As we did in our popular post last year: Gartner 2015 Magic Quadrant for Advanced Analytics Platforms: who gained and who lost , we compared 2016 Magic Quadrant with its 2015 version and focus on changes, gainers and losers. 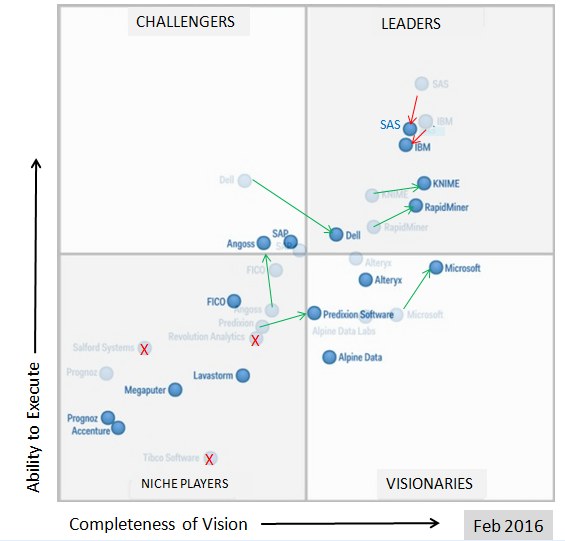 Fig 2 shows a comparison of 2015 MQ (gray background image) and 2016 MQ (foreground image), with arrows connecting circles for the same firm. Arrows colored green if the firm position improved significantly (further away from origin), red if the position became weaker. Only the more important changes are shown.

The same 4 firms: SAS, IBM, KNIME, and RapidMiner, which were leaders in both 2014 and 2015, are now joined by Dell. Assuming that Gartner pays careful attention to location within a quadrant, the 2016 MQ shows that both SAS and IBM have lost a little in ability in execute, and both KNIME and RapidMiner have gained a little in vision.

SAS: SAS has over 40,000 customers and the largest ecosystem of users and partners, and it has high market penetration in all verticals. SAS made significant progress in 2015 with Visual Analytics and Visual Statistics products with easier to use UIs addressed to citizen data scientists. New SAS Factory Miner helps data science teams to collaborate via automated large-scale machine learning.

IBM: While IBM remains a leader, Gartner notes that IBM Watson Analytics for data discovery and announcements of "cognitive era" have led to market confusion around IBM's analytics offerings and how they fit together. Customers complains about the lack of integration between individual offerings. IBM commercial licenses for advanced analytics slowed in 2014 compared with 2013 and relative to its competitors.

KNIME competes across a broad range of industries, but has a large client base in the life sciences, government and services sectors. Customers like KNIME cost-benefit ratio, and its customer reference ratings are among the highest for good value.

RapidMiner had strong sales and marketing strategy in 2015, targeting ease of use. It received high scores for innovative features such as "Wisdom of Crowds" guidance for recommended next steps, and its collaboration features. RapidMiner was further strengthened bu the integration of Radoop acquisition (to address Big Data environments) and building out RapidMiner marketplace.

Dell moved from Challenger in 2015 to Leader in 2016 thanks to new innovative functionality added to an already strong product (Statistica), building upon its market momentum, and creating a sales and marketing strategy that was lacking prior to acquisition.

The companies added in 2016 were: Accenture, Megaputer (back after 1-year absence), and Lavastorm.

The companies dropped in 2016 were:

You can download the Gartner 2016 Magic Quadrant report for Advanced Analytics Platforms from Angoss, Dell, or RapidMiner .