comments
The 20th annual KDnuggets Software Poll had over 1,800 participants. The average voter chose 6.1 different tools, so voters with just one choice stood out. We removed about 180 such "lone" votes (2/3 were from one vendor), because even if they represented legitimate users of that tool, their experience was not representative of what Data Scientists do in 2019.

Here is my initial analysis based on remaining participants, after "lone" voters were removed. More detailed association analysis and anonymized data will be published later. 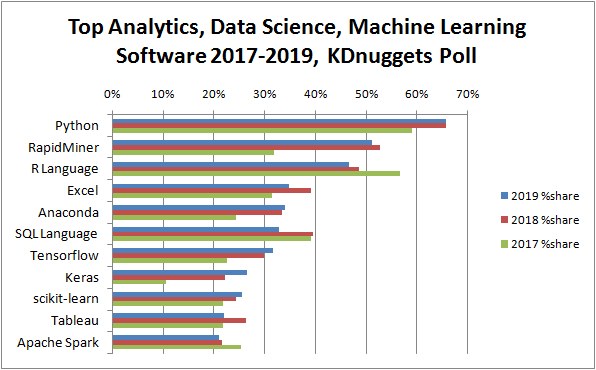 Here are some observations on 3-year trends for top tools.

RapidMiner kept its share at around 51%, which was a reflection of both a large user base and a successful campaign to motivate its users. I note that RapidMiner is not a current advertiser on KDnuggets.

R language share has declined 2 year in a row, but less this year than in the previous year. Several users commented that RStudio should be included, and we will include it in the next poll.

The shares for Deep Learning platforms Tensorflow and especially Keras have grown each year, reflecting the growing usage of Deep Learning in many applications.

SQL is steady, with a share above 30% for many years. So, if you are an aspiring Data Scientist, learn not only TensorFlow but also SQL - it will likely be useful for many more years.

In 2019 we added a number of new entries, and eight of them received at least 25 votes:

The table below lists the tools were included in KDnuggets Poll in 2018 and have grown 20% or more in share and reached at least 25 voters in 2019.

There were 48 tools with 2% or higher share in 2018, and among them 14 (less than one third) have increased share in 2019, while 34 have decreased their share. This trend which also existed in 2018 suggests continuing consolidation of Data Science / Machine Learning platforms.

Some of the decline may be due to lack of vendor campaign to vote in KDnuggets Poll, and some may reflect decline in popularity of the platform as is probably the case for IBM.

Tensorflow remains the dominant platform, and Keras continue to grow as a very popular wrapper on top of Tensorflow. PyTorch has also significantly increased its share. Share of most of the other Deep Learning tools (except for MXnet) has declined.

In 2019, 37% used Big Data Tools vs 33% in 2018. Apache Spark continues to be ahead of Hadoop and we see the emergence of streaming Big Data platforms, like Apache Storm, Flink, or WSO2 Stream Processor. Table below shows the details, with na indicating this software was not included in 2018 poll.

Python and R continue to dominate. The new entry this year was Javascript, which got a respectable 6.8% share. Julia share has increased, while most other languages have declined.

Here are the main programming languages sorted by popularity.

Next page shows regional participation and results for last 3 years.