Intro to Machine Learning and AI based on high school knowledge

Machine learning information is becoming pervasive in the media as well as a core skill in new, important job sectors. Getting started in the field can require learning complex concepts, and this article outlines an approach on how to begin learning about these exciting topics based on high school knowledge.

However, it is a complex topic to both teach and learn.

In this article, I outline an approach where you could learn about Artificial Intelligence, Machine Learning(ML), and Deep Learning(DL) based on high school knowledge alone.  The later part of the article is based on simple high school math – which should be familiar at a GCSE level (to age 15 years). Even if the math is not familiar to you, you can still learn about machine learning and artificial intelligence from the first part of the article.

Any talk of AI often leads to ‘Terminator’ type discussions (Are robots going to take over humanity?). While the media gets excited about AI, the reality is more mundane. So, before we proceed, let's consider some definitions that we will adopt in this article.

Let’s start with the question: “What is learning? (in context of machine learning)

The former (rule-based approach) is not practically feasible because we would have to manually write down rules for all possible scenarios.  So, the other extreme is more viable. Instead of manually creating rules, we could find the rules from the data itself and then apply the rules to an unseen problem.  This idea of learning from a training dataset is the foundation of most machine learning approaches (supervised learning). The process of training involves presenting the system with a set of examples which represent a collection of features of interest. From these examples, the system creates a model – which in turn is used to identify an unseen object. A simplified definition of a model in this context is an algorithm (ex: classification algorithm) trained on a dataset.

Consider the example of predicting house prices. House prices can be influenced by many factors (features) such as the number of bedrooms, proximity to schools, proximity to public transport etc. Predicting the house price based on the features is the outcome. These features are inputs to the supervised learning model, which can predict the price of the house (outcome variable).  Types of Problems addressed by machine learning include:

So, how does this relate to Artificial Intelligence and Deep Learning?  Remember we characterised Deep learning as ‘Automatic feature detection.' Let us reconsider the example of predicting house prices. To determine the features of this algorithm (ex: number of bedrooms, proximity to good schools, etc.), you need knowledge of the application (domain knowledge). For complex applications – ex in healthcare, genomics etc. domain knowledge can be hard and expensive to acquire.  Also, applications that use image, video, sequence, or audio data use hierarchical features.  It is impractical for humans to detect these features.

What if we could understand the structure and features of the data (i.e., follow the underlying representation of the data without human intervention?).

Deep-learning methods can be classed as representation-learning methods with multiple levels of representation. These layers start with the raw input, and each layer transforms the data into a higher-level representation – which acts as an input for the subsequent layer. For example, the lowest layer may detect pixels; the next higher layer may detect edges of an image from the pixels; the next layer may detect contours based on the edges, etc. Hence, each layer in the neural network builds on top of the representation from the previous layer.   Through many such simple transformations, the machine can learn complicated and hierarchical ideas. The higher-level representations of the neural network model can distinguish between minor variants of a concept, i.e., concepts that are similar but not the same. For example, the network can distinguish between wolves and ‘dogs which look like wolves’ (Huskies, Samoyeds and German shepherds).  The same technique can be applied to real problems like tumour detection and other data types – for example – face detection or genomic data.

More generically, Deep Learning techniques are used to work with problems that are not finite-domain. For instance, chess is a finite-domain problem because there are only 64 squares in chess and each piece has a defined action. In contrast, recognising an image of a dog from a picture is easy for a child. But a computer cannot easily recognise pictures of dogs from an image of a dog.  Identifying pictures of dogs is not a finite-domain problem since there are many types of dogs in many different configurations in images (ex: with a collar, with their tail cropped etc.)

And to wrap up this idea, artificial intelligence is based mainly on deep learning techniques. 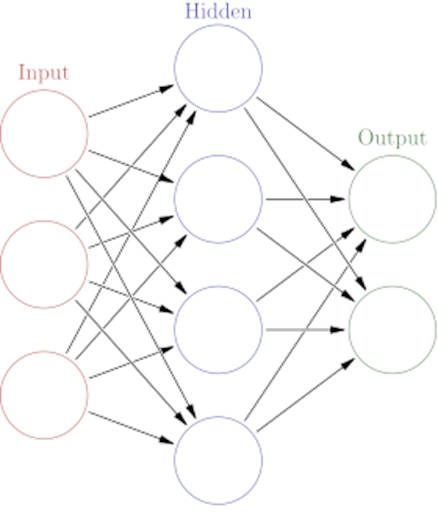 We could now approach the problem based on basic math.

The process of modelling, which we introduced in the previous section, involves finding a function that represents the data (for example, a function to predict house prices). The function can be expressed as an equation and is used to make predictions on unknown data.  The process of fitting a model involves making the algorithm learn the relationship between predictors (features) and outcomes. Once the algorithm determines a functional relationship between the features and the outcome variables, it can predict the values of the outcome variable for unseen features. Hence, the best fitting algorithms have parameters that best depict the problem at hand and can also make predictions on unseen data points. The power of the model, of course, lies in making predictions on unseen data.

Modelling is an iterative process. It initially involves finding the trends and relationships between variables using a mechanism like a scatter plot. Some relationships are predictable; for example, age and experience are correlated. 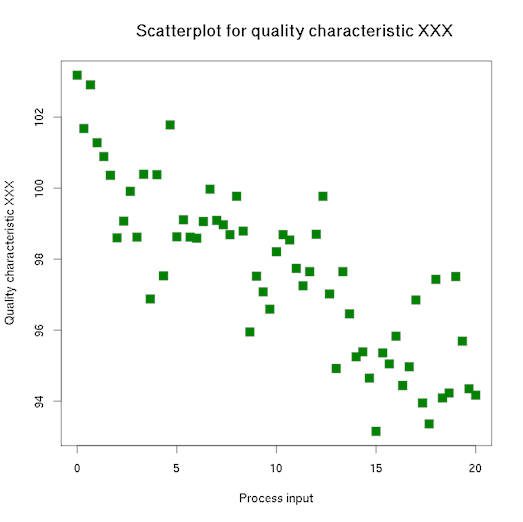 In the simplest case, that function is linear as represented by a linear relationship

What is a Linear Relationship? 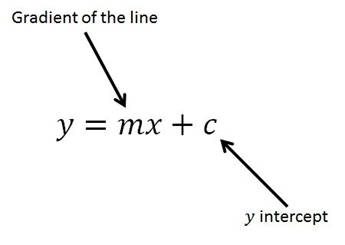 where “m” is the slope of the line, “x” is any point (an input or x-value) on the line, and “c” is where the line crosses the y-axis.  In linear relationships, any given change in an independent variable produces a corresponding change in the dependent variable. Linear regression is used in predicting many problems like sales forecasting and analysing customer behaviour.

The relationship can be represented as below: 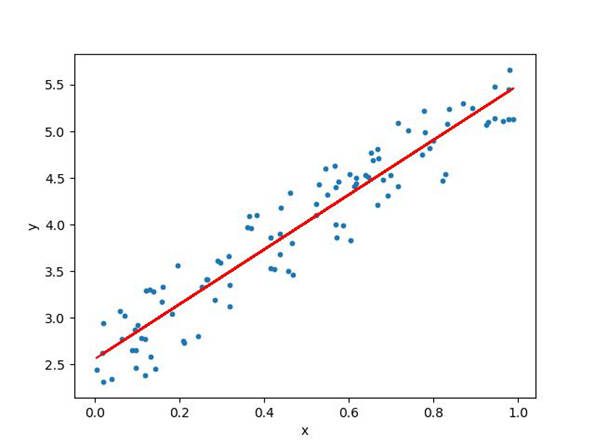 Why start with Linear Regression?

Because it is an idea familiar to many even at high school levels, and it also allows us to extend our thinking to more complex ideas.  The process of fitting the model aims to find the optimal values of the parameters m and c. We identify a line that best fits the existing data points. Once we've fitted the model, we can use it to predict outcomes (y-axis) based on inputs (x-axis). Training of the model involves finding the parameters so that the model best fits the data. The line for which the total error between the predicted values and the observed values is minimum is called the best fit line or the regression line. 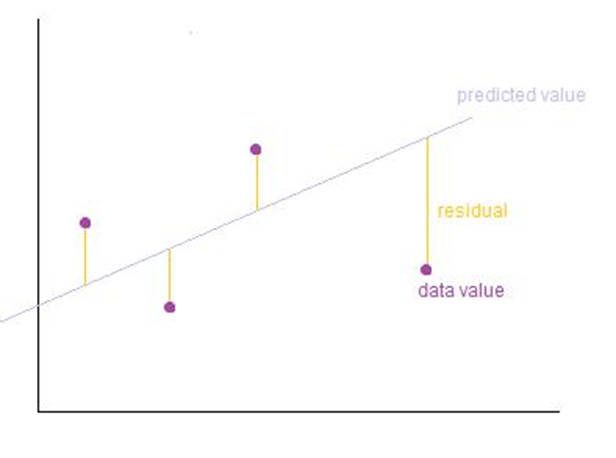 In Ordinary Least Squares (OLS) Linear Regression as described above, our goal is to find the line (or hyperplane) that minimises the vertical offsets. Or, in other words, we define the best-fitting line as the line that minimises the sum of squared errors (SSE). 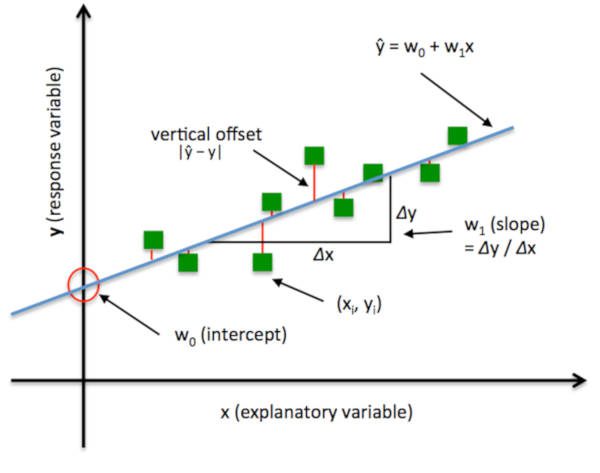 In this case, the total error to be minimised is

So, the basic GCSE level maths can be used to understand the fundamentals of building and training models.

In this article, we saw how you could get started with machine learning and deep learning using basic high school knowledge. The article is based on a forthcoming book, and we plan to share free copies with a limited number of UK teachers. I am the course director for the Artificial intelligence: Cloud and Edge implementations course at the University of Oxford, and if you are a teacher and interested in these ideas, please connect with me on LinkedIn referring to this article.  The views expressed in this article are his own and do not belong to any organisation I am associated with.