Train a "blackbox" GBM model on a real dataset and make it explainable with SHAP.

GBM models have been battle-tested as powerful models but have been tainted by the lack explainability. Typically data scientists look at variable importance plots but they are not enough to explain how a model works. To maximize adoption by the model user, use SHAP values to answer common explainability questions and build trust in your models.

The dataset we are using is the advertising dataset provided by ISLR and you can get the code used on d6t github.

As explained in Top 10 Coding Mistakes Made by Data Scientists, to make a highly effective data science workflow, we will be using file manager d6tpipe and workflow manager d6tflow.

Second, don't build a model without having an intuition on what it should do

As explained in Top 10 Statistics Mistakes Made by Data Scientists, you want to form an economic intuition on how the model should work.

The advertising dataset shows sales as a function of advertising spend in TV, radio and newspaper. By looking at the scatter plots, we can tell TV and radio are effective marketing channels because sales is strongly related to spend in those channels. But note that radio has a negative impact while TV has a positive impact (NB we forced a negative relationship with radio). Newspaper seems to only have a marginal impact. Finally, there seems to be an interaction effect between TV and radio.

GBM models have been battle-tested as powerful models but have been tainted by the lack explainability. Lets train the model and see how we can explain it. We will be using LightGBM.

As the name suggests, variable importance plots tells you about the strength of relationship between an input and output variable. But to trust a model, users typically want to know more: is the impact positive/negative, linear/non-linear? Are there times when it works/does not work? They want to see if the model conforms with their economic intuition.

In our example, the importance plot does not show newspaper spend with a negative relationship that we established to be there. This would confuse the model user and they would not trust the model based on this plot alone. 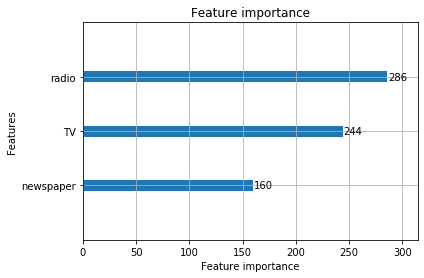 Explain the model with SHAP

SHAP allows you to see the directional impact of each input on the output variable and this gives the model user the crucial intuition on how the model works. 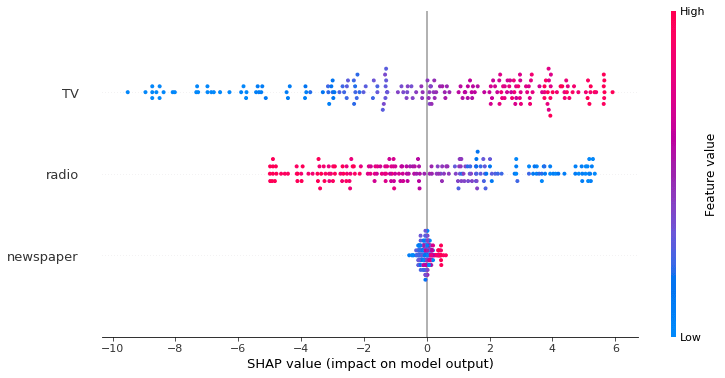 You can also investigate the "fitted" values in a scatter plot to visualize the relationship between the input and output variable in more detail. This is useful for more complex relationships and understanding interaction effects.

In this case, the relationship is linear and there is an interaction between TV and radio (you can confirm by running OLS and include the tv_radio variable). 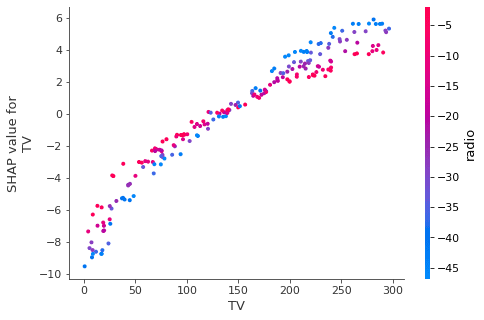 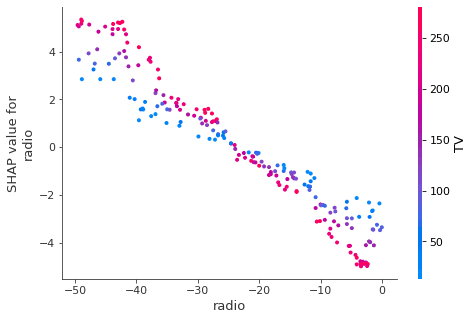 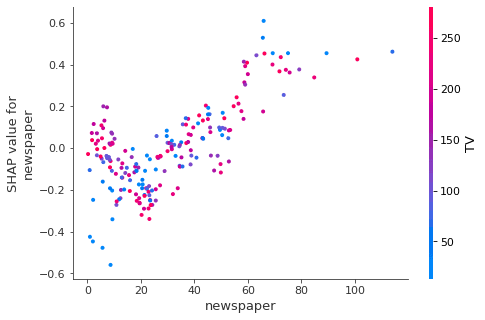 What about partial dependence plots?

Those work also. The advantage is that their output is in the same scale as the actual target variable. This is unlike Shapley values which show the marginal impact relative to the average forecast.

This is another question commonly encountered in practice: you have trained the model and make a prediction using the latest data. The model user wants to know not just the predicted value but also why your model makes that prediction. SHAP can explain individual predictions and can explain how each input variable contributes to the overall prediction.

Here we can see the latest predicted value is [13.18]. TV pushed the prediction up while radio pushed it down. Newspaper barely had an impact. This is inline with what we expected.

Where to learn more?

Bio: Norman Niemer is the Chief Data Scientist at a large asset manager where he delivers data-driven investment insights. He holds a MS Financial Engineering from Columbia University and a BS in Banking and Finance from Cass Business School (London).